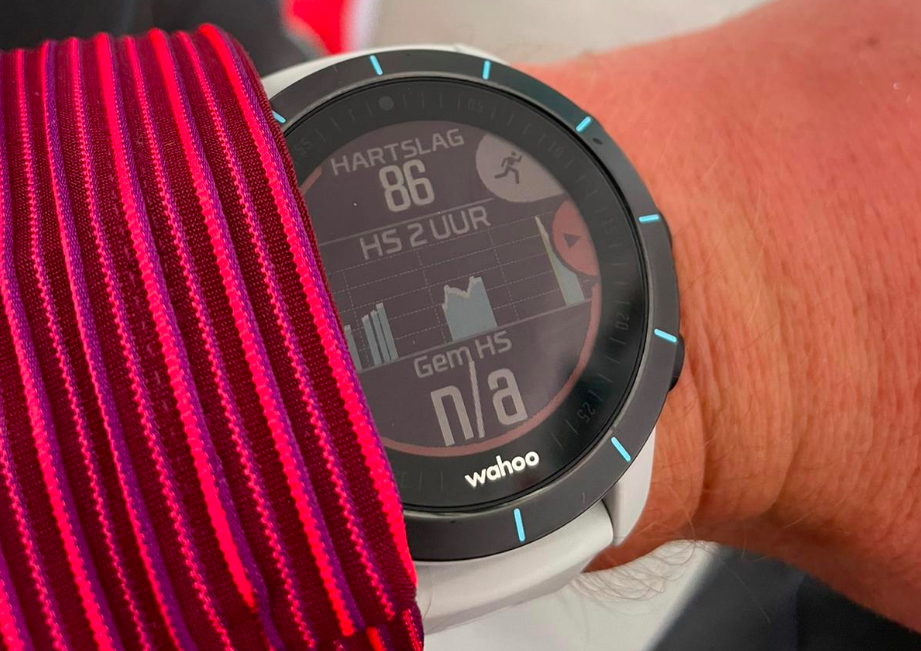 The launch of the Wahoo Elemt Rival came as a surprise last year, but that doesn’t make the new sports watch any less interesting. After the success of the company’s bike computers – the Wahoo Elemnt Bolt and Roam – Wahoo now also entered the GPS watch market. So is this a good move for Wahoo? Read on to find out.

The Wahoo Elemnt Rival – which is available in black and white – stands out immediately in a couple of ways: the watch comes at a lower price than similar models from other brands (the suggested retail price is Є379.95), and is impressively light. At just 53 g, you notice just how light the Wahoo Elemnt Rival is as soon as you put it on your wrist. That makes the watch nice and comfortable, but does also make the watch feel a bit cheap and fake when you hold it in your hand. However, once it’s around your wrist, which is why you have a watch for anyway, that feeling disappears.

The design of the Wahoo Elemnt Rival is in our opinion a success. It fits perfectly around the wrist, the band feels smooth, but at the same time sturdy, and the screen is in color – which you can choose yourself – and very sharp. There’s no accounting for taste, but if you ask us the buttons on the side of the screen (five in total) could have been a bit smaller, but others might find the buttons an addition to the tough look of the – for the rest – elegant watch. It’s a nice watch to wear when practicing sports, but also in your daily life.

The ceramic ring, which is placed around the screen, prevents the screen from getting scratched. Besides the option to change the color of the screen, you can change the whole interface to your personal liking. You can choose out of two digital and two analog options. Setting the watch up is easy through the Wahoo Elemnt App. We had a preference for the digital interface, that had all your necessary data clearly visible.

The Wahoo Elemnt Rival feels very comfortable. While the watch might feel a bit “cheap” in your hand, you will definitely feel the added value of the choices made. The band fits perfectly around the wrist, and you will barely even notice it. Even when you pull it tight, your skin doesn’t get irritated after a few hours of wearing it. Additionally, the Rival stays well in place and won’t get uncomfortably hot or wet (from sweat) around the pressure points.

When you first start using the watch you will notice one thing that’s missing: a touchscreen. While many comparable models have a touchscreen, the Wahoo Elemnt Rival is controlled by the five buttons on the side of the screen. Ickn theory that might be a disadvantage, but in reality we didn’t miss it – more often than not a touchscreen on a watch is a feature we rarely use. The buttons of the Rival are not always so easily operated, though. While they appear rather big, it’s sometimes tricky to reach for them, and, while it’s hard to explain in words, it can feel as if the buttons are a bit too deep “in” the watch. We never had any trouble pushing any of the buttons, so it’s not really a problem, but it doesn’t feel completely “natural” to operate them.

In many ways the Wahoo Elemnt Rival is a great watch and battery life really stands out. We used it for over two weeks – training nearly every day – before we had to charge it again. During all your training, the data is clearly visible. You can easily move between speed, heart rate, the route and many more options; or you just combine all of that data in one screen. With the Wahoo Elemnt App you can decide what you want to see during workouts – the fields are really easy to customize and the process takes just seconds.

Maybe the coolest thing about the Wahoo Elemnt Rival is that through the Wahoo Elemnt App you can connect it to your Wahoo bike computer, so that you can transfer all your data easily. The app, in general, is very handy. You can find all your results after a training session or race on the app, and you can easily pair the watch with your Kickr Smart Trainer, too. Another nice extra is that you can use the Rival as a livetracker. As with the Wahoo bike computers, you can send a link to friends and family, so they can follow you.

Finally, we like to point out the accuracy of the Wahoo Elemnt Rival. Over the past few weeks we’ve been training with the watch and got to compare the data with other watches. The GPS, speed, heart rate and altitude measurements are all accurate, and, compared to some other watches it seemed that the heart rate – measured via the wrist – is quite precise, too.

Don’t let our opinion on the cheaper feel of the Wahoo Elemnt Rival stop you from purchasing this watch. The light weight, great battery life and other great features makes this an excellent watch for triathletes. The seamless connection with the Wahoo bike computers is another great benefit.