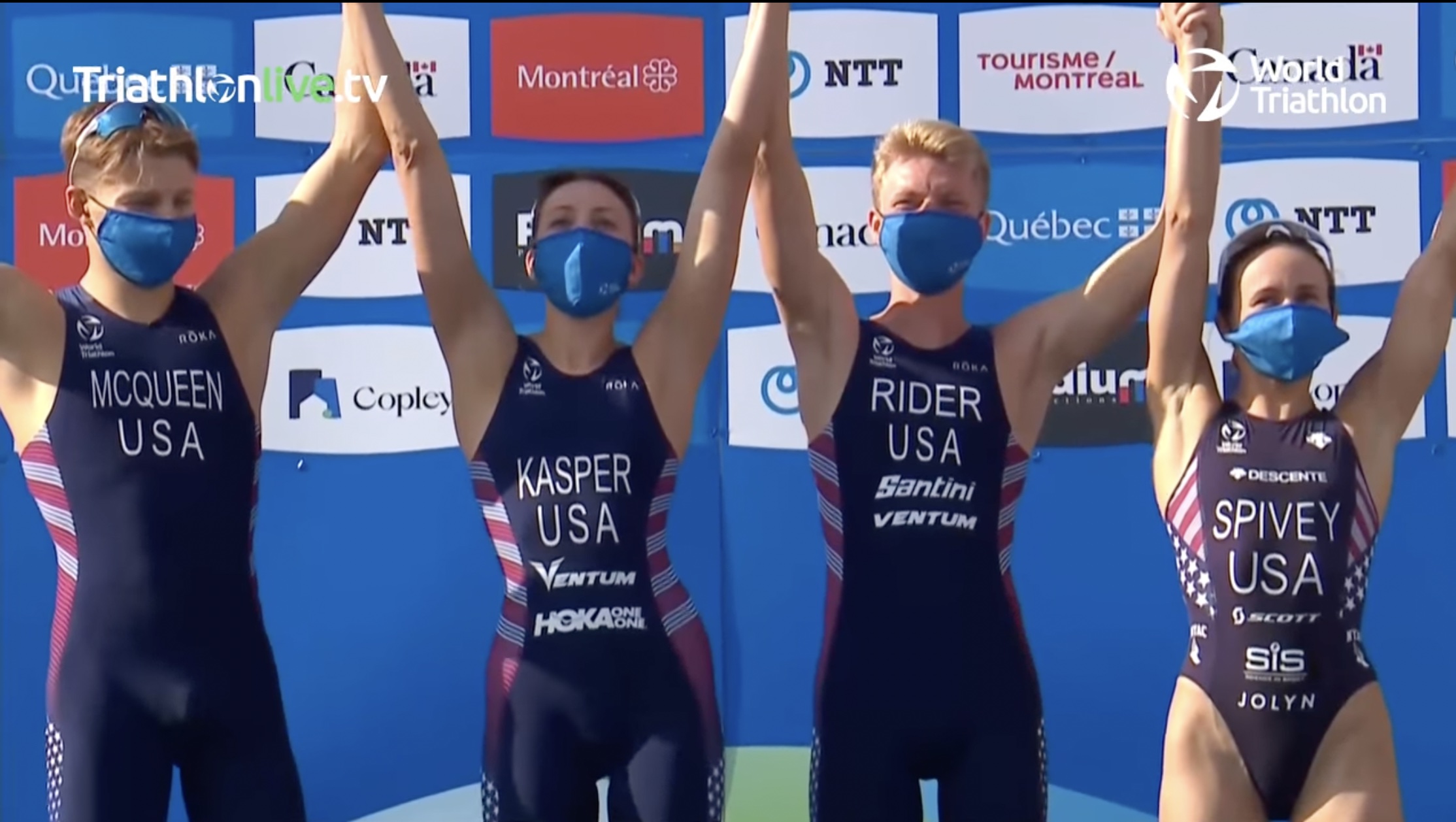 It came down to a three-way battle for the top step on the podium at today’s World Triathlon Championship Series Montreal Mixed Relay, but in the end there was no touching the final leg by American Chase Morgan, who overcame a nine-second deficit starting the swim to bring the US the gold medal.

After France enjoyed a sweep of the men’s podium in yesterday’s race, the country ended up not starting today’s race, taking out one of the obvious favorites for the win. Young Canadian Kira Gupta-Baltazar led nine teams that started out of the water, but wasn’t far ahead of Japan’s Sarika Nakayama and American Taylor Spivey. A big group eventually formed on the bike, with Australia notably well behind – Emma Jackson made a gallant effort to get up to the group, but would end up over a minute down by the end. It was New Zealand’s Nicole Van Der Kaay who would charge into the hand off zone in first, with American Spivey a few seconds down and Italy eight seconds behind.

American Seth Rider and Italy’s Gianluca Pozzatti swam their way up to Dylan Mccullough, and those three would quickly set the stage for the race for the podium. After riding together they blasted out onto the run with a sizable lead, with Ryder handing off to Kirsten Kasper with a lead of 17 seconds.

Out on the bike, though, Italy’s Alice Betto towed Aisley Thorpe up to Kasper’s wheel, and the three hit T2 together. Betto continued her charge to end the run in front of Thorpe by four seconds and was nine seconds up on Kasper as they handed off to the fourth and final competitors.

Alessandro Fabian hit the water first with Saxon Morgan not far behind, but it was American Chase Mcqueen who immediately made an impact with a spirited run down the ramp and a huge dive that got him almost on the feet of the first two. By the end of the swim all three were together, with Germany’s Jona Schomburg 37 seconds back, which made it clear that the medals would be decided amongst the lead group.

After coming off the bike together, Mcqueen had an incredibly quick transition and took charge of the race from there. He would cruise across the line, giving the Americans the win in 1:25:27, with the New Zealand team taking silver in 1:25:32 and Italy rounding out the podium in 1:25:46.

You can find complete results here.