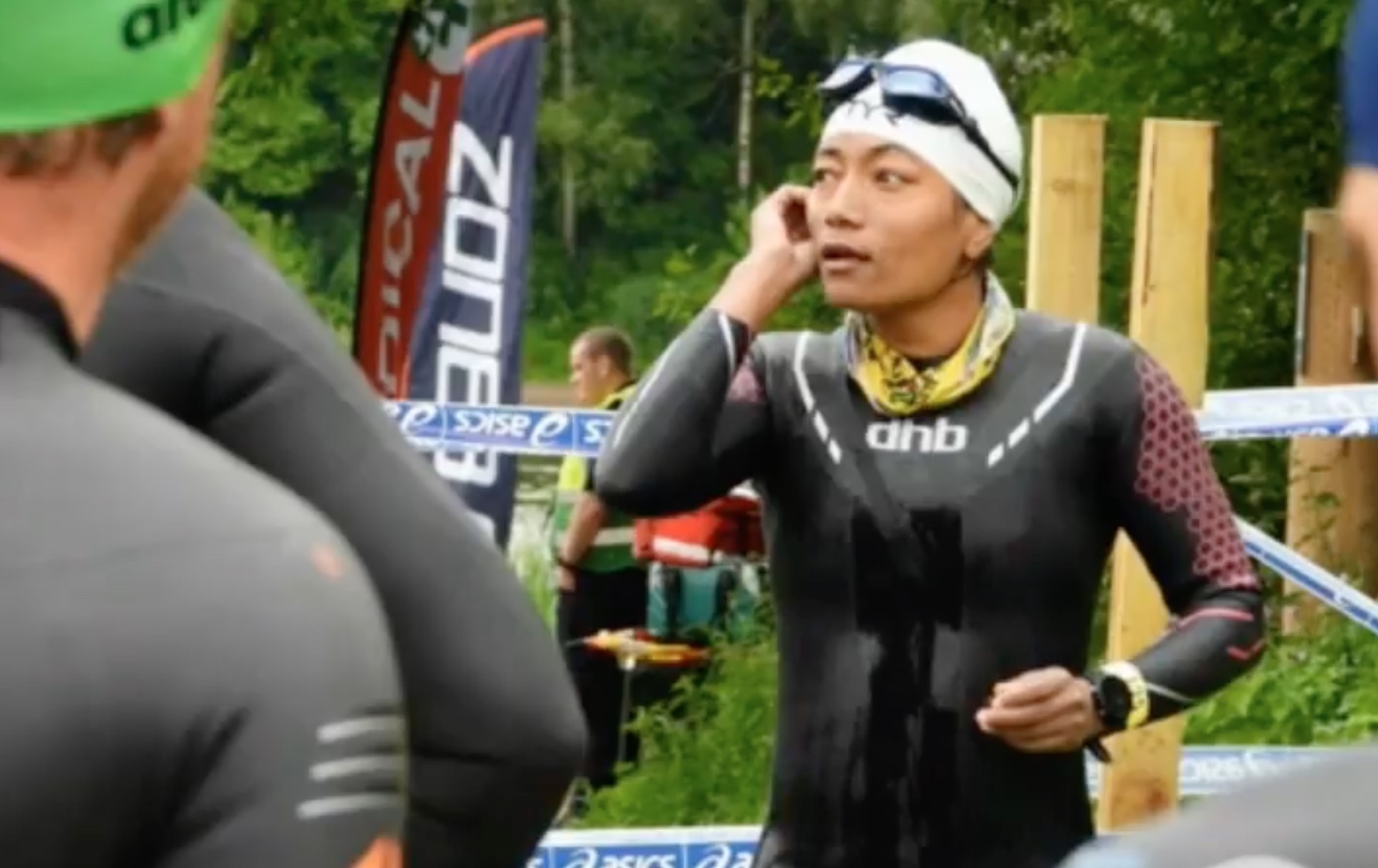 Earlier this year, Nirjala Tamrakar made history by becoming the first woman in Nepal to finish a long-distance triathlon. To be exact, it was on Jun. 6 this year that Tamrakar achieved this huge goal, she did so by completing the UK Ultimate Triathlon. That wasn’t too far from home, because the 42-year-old athlete nowadays lives in the United Kingdom.

It was only December 2019 when Tamrakar did her first triathlon: a sprint distance. That was a huge step already, because Tamrakar had always been too scared to swim in open water. “I began learning the technique of freestyle swimming in April 2019 from my fellow triathletes of the APF (Armed Police Force), while we were in preparation for the National Games. I was a Contract Player for the APF, and I couldn’t participate in triathlon as I panicked when swimming in open water in the Phewa Lake a day before the race.” Tamrakar had to decide to take part in the duathlon instead and wait a bit longer for her switch to triathlon. After she learned how to swim front crawl, she slowly started to get used to being in open water.

As soon as Tamrakar was able to swim, she signed up for her first race. Her first sprint distance was at the South Asian Games. “The majority of triathletes take a step-by-step approach by completing races in various short-distance races before they try to do a full distance triathlon. However, I knew that time was an issue for me, and I wasn’t getting any younger, so I went directly from the South Asian Games sprint triathlon to the Ironman distance.”

Her preparation for that first long-distance event, wasn’t ideal, though. The coronavirus hit and that saw Tamrakar ticking off all her training sessions alone and indoors. “My training began when my family moved to the United Kingdom in December 2020. It was a full lockdown in the UK because of the coronavirus, and we didn’t know the new city or the places for cycling… and cycling clubs were closed. So, I did all my bike training indoors, using my roller.” Because of all the restrictions, Tamrakar wasn’t able to make friends either. “I didn’t go out for a long ride by myself for a single day, because I was bad in navigating through a new city.”

Tamrakar wasn’t afraid to explore the surroundings by foot, so her running sessions she could do outdoors. Most of them on a horse track close to her house. “Each time I would go out to explore new places in our neighborhood, until I found a beautiful horse ranch where I could run a lap in 30 minutes. It became my favorite place to run, depending on my training schedule, I would run two to five laps a day.”

Just before the race, Tamrakar was able to improve on her swimming as the pools re-oped after a period of lockdown. The comfort of the pool wasn’t the only thing she wanted to test herself with, though, because especially swimming in open water would get her prepared for that tough race, she knew. “We would drive to the lake with our children, most of the time it was raining, so the children and my husband stayed in the heated car waiting for me to finish.”

“It really helps to have people there to support you”

On Jun. 6 all the hard sessions were done. It was now time to give it her all during the race. And while the weather outside was cold and rainy, Tamrakar geared up for the race of a lifetime. After a good first discipline, the swim, Tamrakar saw her husband and kids cheering for her at the water exit. With that boost of motivation, she jumped onto the bike, to end up spending the next seven hours in the saddle. “At the end of the cycling part, my husband and kids were again at the transition area to cheer me on and take photographs. It really helps, knowing that you have people there to support you and to cheer for you,” Tamrakar writes in her blog post.

The most difficult part was yet to come: the marathon. “With around fourteen km left to finish, I was starting to feel dizzy. I walked, but it wasn’t helping. I was starting to think: what if I collapse, and I need to pull out of the race just before the finish? I knew I didn’t want to withdraw from the race, and I was scared that my body couldn’t keep up with my determination.” Fortunately, the thought of her kids being there at the finish line kept her body going.