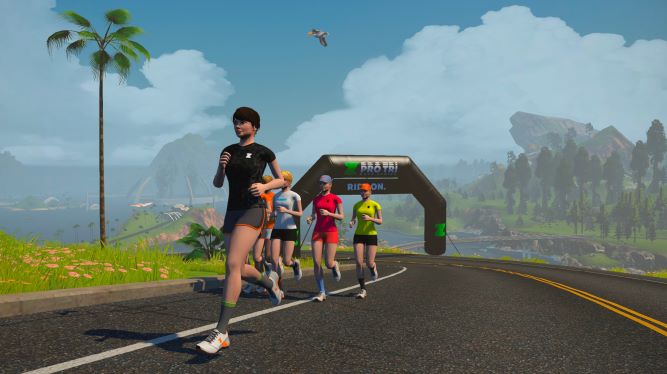 Great Britain’s Lucy Charles-Barclay and France’s Antony Costes showed off their Zwift-racing prowess in style with dominating performances to take both the day and the overall Zwift Pro Tri Series 3 today.

The final race of Series 3 started with a hilly, 11.2 km bike leg on the hills of Watopia’s Whole Lotta Lava route. Then they hit the treadmill for a 5.1 km run on That’s Amore route in Watopia. The last leg saw the competitors on their bikes for a points race on a 1.9 km loop in Downtown Dolphin, Crit City.

Charles-Barclay back on top

A week after having to pull out due to illness, Lucy Charles-Barclay returned to the top spot of the podium in the latest round of racing in the Z Pro Tri Series, dominating both the bike rides and achieving the maximum amount of points on the run to easily take the day.

Charles-Barclay was so strong on the day that after easily taking the opening time trial, she dominated the final points race that wrapped up the day by taking all but one of the sprints, including a nail-biting photo finish on the final lap (she won by 0.005 seconds over Ruth Astle).

That means Charles-Barclay should easily take the overall series, winning three of the four races. Kessler, who had the fastest run of the day, took second on the day and likely in the series thanks to her win last week and runner-up finishes in the other events in the series. Emma Pallant-Browne rounded out the podium.

(We’re still waiting for the official results from the series – we’ll update our story once those are available.)

Matt Hanson took the opening time trial and was kept honest by Belgium’s Seppe Odeyn, who made a late charge and almost pipped the American at the line. A big group took the maximum number of points in the run, setting up a close battle for the final leg of the race, the points race.

In that race, though, Costes showed his true mastery of the Zwift format, staying in the mix for most of the sprints and taking the final sprint, more than ensuring he’d take the day and with the the four-week series.

Costes ended up ahead of Odeyn and Aaron Royle on the day.

It seems logical that Costes will take the overall series win thanks to his three wins – we’ll update this story once that is confirmed.