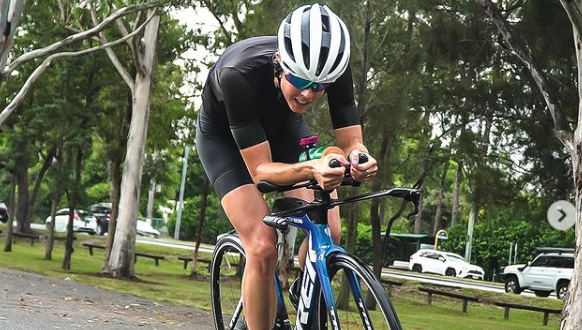 Those of us in the northern hemisphere were left to look on in envy as some of Australia’s top pros were on hand for the Husky Australian Triathlon Championships this weekend. The half-distance race received support from the Professional Triathletes Organisation, who beefed up the AUD$15,000 pro prize purse by an additional AUD$20,000.

Strong fields for both the men and women led to some close racing as Ellie Salthouse and Simon Hearn taking the honors as Australian champions.

Flying off the front in the swim

New Zealand’s Trent Thorpe blasted through the swim, coming out of the water well-ahead of the rest of the men – he had a lead of 43 seconds on Steve McKenna and 58 seconds on Leigh Anderson. Then there was a big group of nine out between 1:08 and 1:31 behind the lead.

On the bike, though, it wasn’t long before the men started to form a large group, swallowing Thorpe up. Through 19 km a group of 12 men were lined up 12 m apart as they headed to the end of the first of three laps.

Ellie Salthouse led the way out of the water with Annabelle Luxford right on her heels. The pair were 1:17 up on New Zealand’s Amelia Watkinson. Through the early stages of the bike things stayed pretty much the same – as the women finished the first 30 km loop Salthouse and Luxford were just 2 seconds apart, with Watkinson 1:31 down, Grace Thek, Lisa Marangon and Chloe Lane 3:27 back, while Renee Kiley was 3:47 behind the leaders.

In the women’s field it was Salthouse coming off the bike 14 seconds ahead of Luxford. The pair snuck away on the bike from the rest of the field having built up close to two minutes on their competitors with Watkinson remained in third.

Hearn runs through for the win

Off the bike Caleb Noble would move to the front through the first half of the 21 km run, but as the men started the second of the two out-and-back loops Simon Hearn made his move and started to pull clear of the rest of the men.

Salthouse cruises to another win

Just a couple of weeks after taking the Hell of the West event, Salthouse quickly pulled clear of Luxford and took control of the race. By the 15km mark of the run Salthouse was almost two-minutes up, but Watkinson had leapfrogged Luxford and appeared on track for the day’s fastest run split.

Salthouse would take the day in 4:10:00 thanks to a 1:22:14 run split. Watkinson would end up running just six seconds slower, but the time she’d lost on the swim and bike legs would leave her just under two-minutes down (4:11:55) with Luxford rounding out the podium in 4:14:28.