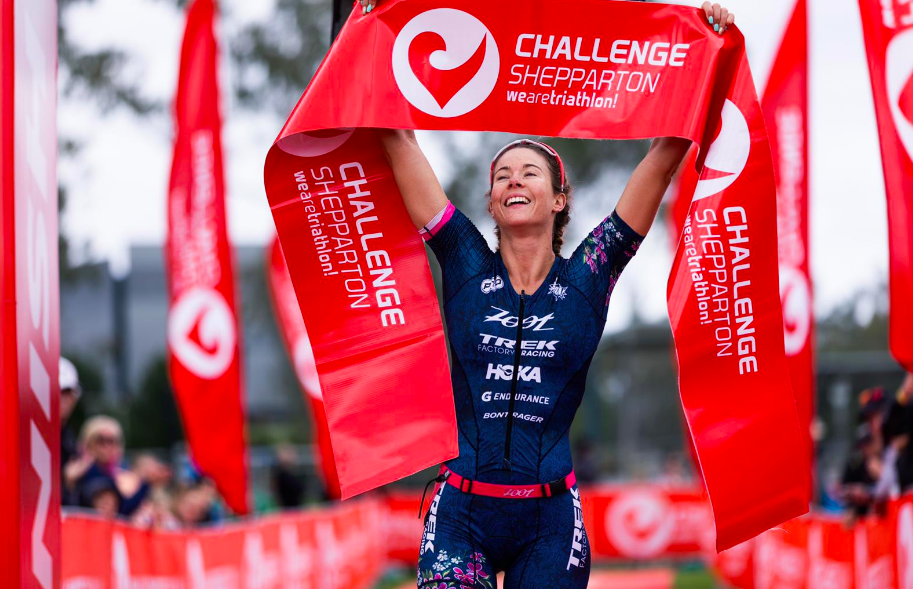 Max Neumann won Challenge Shepparton after a particularly strong race and an especially impressive run. Favourite Ellie Salthouse led the women’s race from start to finish, taking her fourth race in a row.

Despite a clear blue sky, the temperature at the start of Challenge Shepparton was quite cool at just six degrees. The pros did everything they could to stay warm in before the early start, but fortunately they knew the temperature would become much more pleasant during the day. The water temperature in Victoria Park Lake was considerably warmer at 19 degrees, which seemed to suit Trent Thorpe and Josh Amberger. Both athletes took the lead right from the start and saw their lead grow to just over a minute by the end of the swim. With a split of 23:14 they headed for T1 with a nice gap on the rest of the field.

On the bike, Amberger quickly rode away from Thorpe, sending a clear message to the field: “I’m going for the win.” Amberger kept on pedaling as hard as possible, increasing his lead to about one minute. Behind Thorpe, who also continued to ride hard by himself, hovered about a minute behind Amberger, while a chase group of five athletes formed.

One of the athletes in that group was Max Neumann, who eventually made his move and passed Thorpe to move into second and, at times, appeared to be gaining time on Amberger, In the end, though, Amberger was the fastest biker of the day thanks to his 2:04:14 split, which put him out on the run course in the lead. His lead was about a minute on Neumann, with the larger chasing group not far behind him.

In the first few kilometers Neumann and Steve McKenna, who worked his way up to third, began to make up time on Amberger. It wasn’t long before Neumann’s quick pace was rewarded and he passed Amberger for the lead.

Neumann’s fast pace – he averaged 3:20 per kilometer – eventually proved inimitable and resulted in a 1:10 half marathon split. Neumann claimed the victory in 3:42:37. Behind him there was an exciting race for second between Amberger and McKenna. The latter ran about four minutes faster, but ultimately came up just short as Amberger took second in 3:46:14. McKenna finished third in 3:47:06.

Similar two the men’s race, two women, Ellie Salthouse and Grace Thek, took off immediately in the swim and built a lead of over a minute. After a 27:11 swim split they started the bike ahead of the rest of the field, who naturally wanted to do everything in their power to close the gap as quickly as possible.

While Salthouse and Thek teamed up in the water, on the bike Salthouse quickly rode away from her pursuer. Salthouse’s lead grew quickly, while Thek struggled a bit on the bike and saw, among others, Penny Slater and Renee Kiley pass her. At the halfway point of the bike, Salthouse had a 1:15 advantage over Slater, two minutes on Kiley and 3:55 on Thek.

In the end, it was Slater who set the fastest bike time (2:18:13). That impressive effort could not change the fact that Salthouse was still the first female athlete into T2, although the gap was minimal. Kiley returned to the transition area in third.

During the run, Salthouse was in complete control and her victory was never in danger. Behind her there were a lot of changes, but it was Thek who stood out. After a mediocre bike, she came back strong in the run, passing Kiley for the final spot on the podium behind Salthouse and Slater. Salthouse won in 4:09:13, with Slater taking the runner-up spot in 4:14:02. Thek finished in 4:15:32.