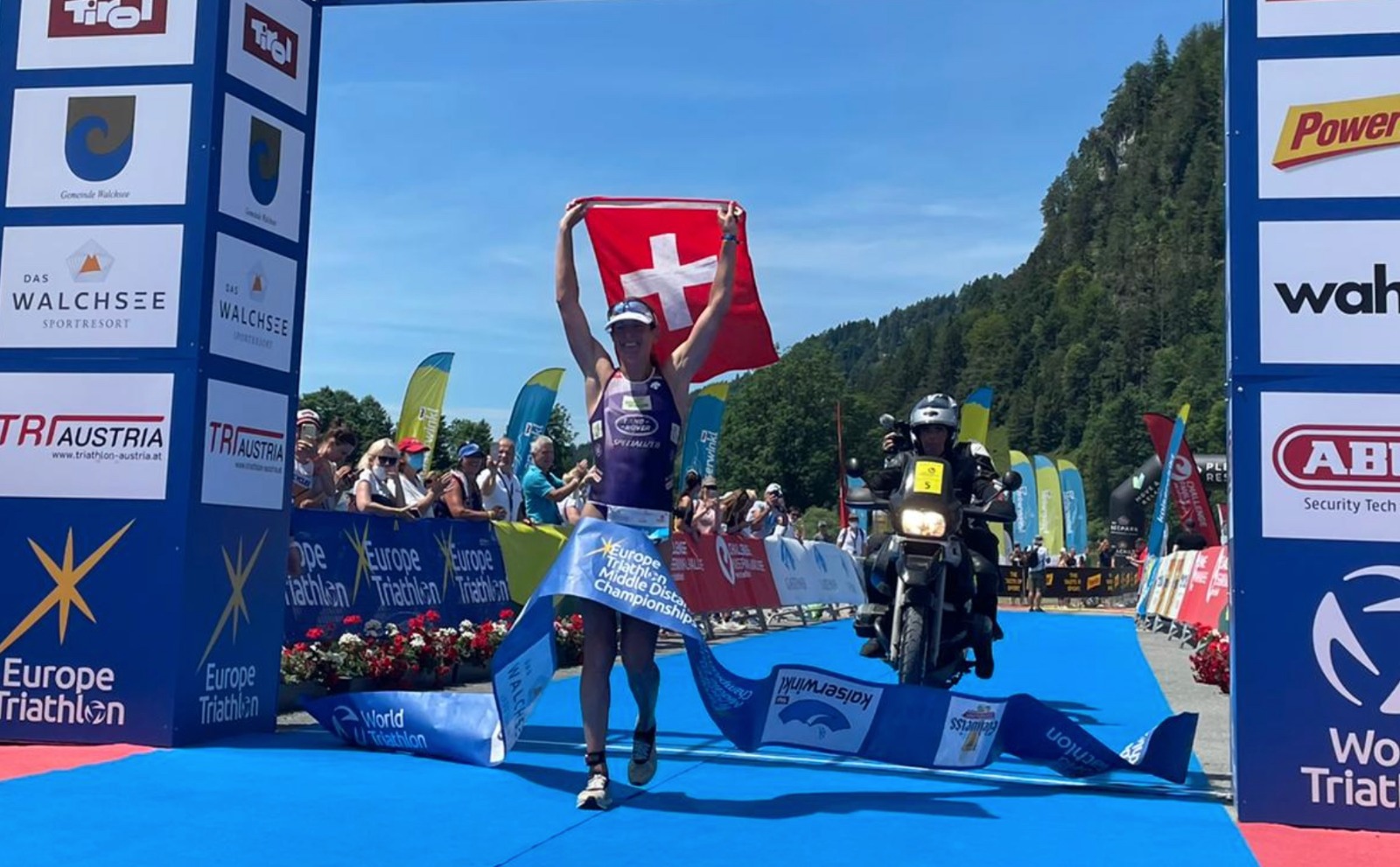 Frederic Funk and Nicola Spirig lived up to their role as favorites at the European Middle Distance Championships at Challenge Walchsee-Kaiserwinkl. Funk took the lead early on, was briefly joined by Ruben Zepunkte, but was never really challenged as he took the win in 3:36:56. Spirig also had an “easy” day at the office, as she took the lead on the bike and only managed to increase her lead. Anne Haug, the German defending Ironman world champion crossed the finish line second in tears, especially disappointed.

Christophe de Keyser took things out immediately at the start of the swim, enjoying the excellent conditions. Thanks to a clear blue sky, the sun and hardly any wind, all the ingredients were in place for a fast race. This became clear when the Belgian came out first of the water in 24:35. At that point he had Nicolas Mann, Frederic Funk and Giulio Molinari, among others, on his feet. The athlete who was in the most trouble thanks to the fast swim was favorite Thomas Steger – he came out of the water more than a minute and a half behind and had a lot of work to do on the bike to have a chance to catch up with the leaders.

On the bike, De Keyser was still initially in the lead, but after fifteen kilometers it was Funk and Molinari who rode together at the front. They didn’t stay together for long, because Funk decided to pick up the pace and rode away from Molinari. Halfway through the bike, Funk went solo, with Molinari about a minute behind. At that point former pro cyclist Ruben Zepuntke made up a lot of time joined the Italian.

With about 20 kilometers to go on the bike, Zepuntke managed to move up to join Funk, and those two athletes started the half marathon together. They did so with a fairly big lead, Molinari started his half marathon more than three minutes behind, while Steger had made up some ground after his poor start and hit T2 a few minutes after Molinari in fourth.

While Funk soon ran away from Zepuntke – who struggled through the run – it was Steger who continued to make up ground. Halfway through the half marathon, Funk had a one-and-a-half minute lead over Zepuntke, but Steger had moved to third, less than five minutes behind, dropping Molinari to fourth place.

There was lots of action in the closing stages of the run – not at the front as Funk ran unthreatened to the finish (3:36:56). Behind him Steger managed to overtake Zepuntke and take second in 3:38:51. Bart Aernouts somehow managed to run his way to third – on the bike the Belgian seemed to be out of contention, but he flew through the run to finish in 3:42:05, four seconds ahead of Zepuntke, who took fourth.

In the women’s race it was, as expected, Sara Perez Sala who dictated the swimming pace. While she made her debut over the middle distance just a few months ago, her roots lie in short distance and it showed in the pace she held in the water. She finished the 1.9-kilometer swim in 26:10, although at that point she still had Nicola Spirig on her feet. The former Olympic champion was in a great position heading to the bike, especially because another big favorite, Anne Haug, lost almost 3:30 in the water.

On the bike, Spirig showed her strength as she rode away from Perez Sala almost immediately and managed to increase her lead fairly quickly. It was perhaps not so striking that the Swiss athlete’s bike pace was just too fast for the Spaniard, Perez Sala came through the 45-km point of the bike about three minutes behind, but it was surprising that Haug was also losing time to Spirig. In fact, the world champion didn’t even manage to make up time on Perez Sala through the first half of the bike, which meant she was about six minutes behind Spirig.

During the final kilometers on the bike, however, Haug found some new energy, hitting T2 the German alongside Perez Sala. Spirig, however, still had a comfortable lead of over three minutes at that point, which put her in a great position to take the victory and European title.

Which is exactly how things ended up as Spirig increased her lead, taking the win in 3:58:00. Over five minutes later Haug came in second in 4:03:03. Perez Sala dropped back during the run and finished fifth. The bronze went to the strong-running Marta Bernardi, who finished in 4:09:53.

Interviews with the top three men and women:

Frederic Funk on his win:

Marta Bernardi on her third place: