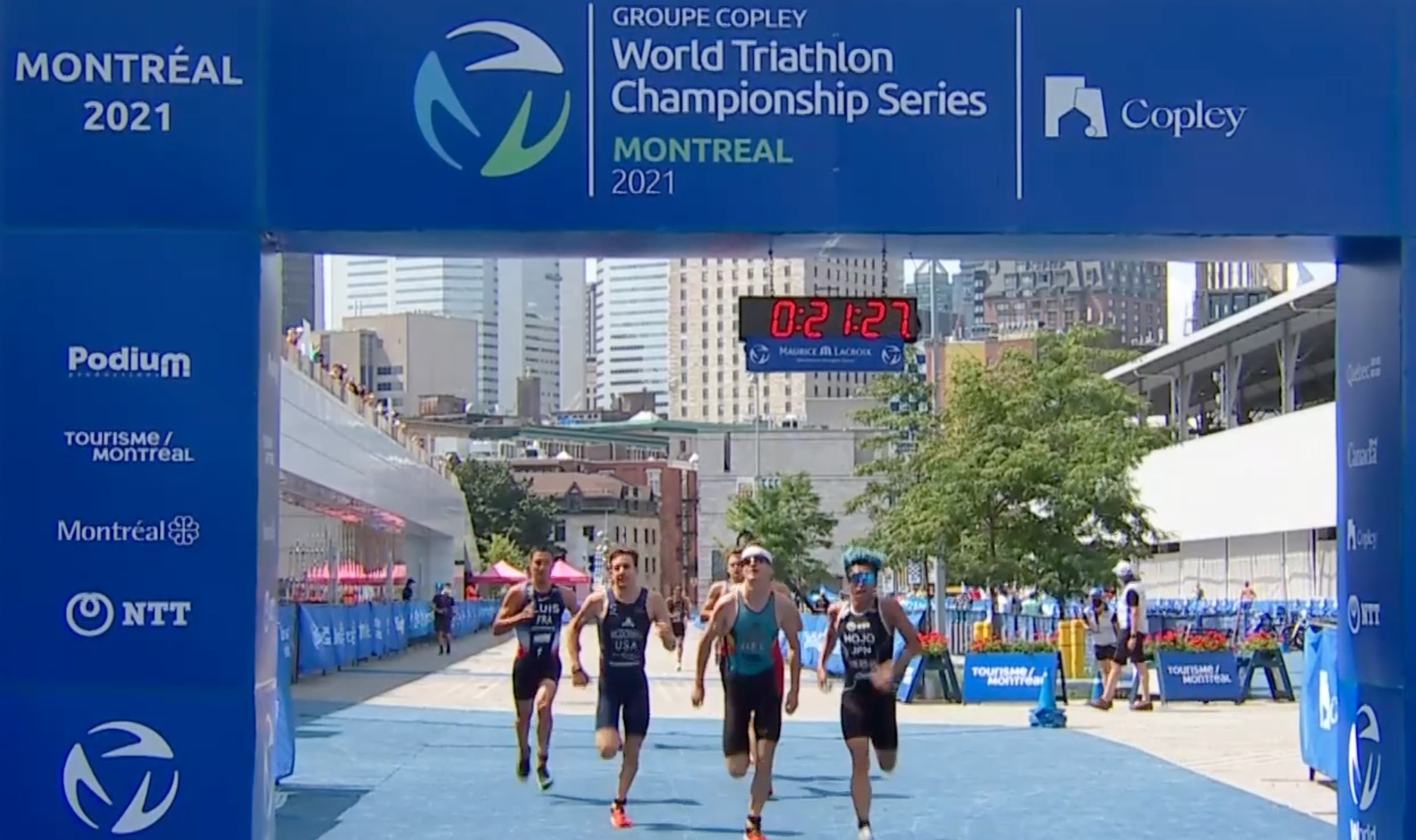 Two completely different races just saw twenty men claim a spot for the finals of the World Triathlon Championship Series Montreal, which take place tomorrow. The first qualifier event of today was won by Japan’s Takumi Hojo and in the second race it was Australia’s Jacob Birtwhistle who took the win. Another ten athletes will be added to the list later today after the repachage race.

Read the report on the women’s qualifier races here.

Swimming 3:31 minutes over 300 meters, it was France’s Vincent Luis who took his bike out for a ride in first place. Right on his heels, he was followed by Hojo. The rest of the field followed approximately six seconds later, but Luis’ fast swimming saw quite some men getting dropped already in the beginning of the race. Luis and Hojo stayed together in the first part of the bike course, before they were caught by another seven athletes, forming a front group of nine, which meant all of them were in a safe position when going out on the run course.

The first group had an advantage of approximately ten seconds on the fastest chasers when reaching T2. Australia’s Brandon Copeland was first to run out of T2, but the rest soon followed his steps. While the first nine athletes were battling for a high ranking, it was really about that tenth place, which meant a direct ticket to the finals. Spain’s Antonio Serrat Seoane worked hard from behind to secure that spot on the run. In the front it turned into a nice final sprint, but since all of these athletes would directly qualify anyway, it clearly didn’t matter for them anymore who took what spot exactly, as they all crossed the finish line simultaneously. Formally it was Hojo who took first place, Belgium’s Marten van Riel who crossed the line second and America’s Kevin McDowell who got in third.

With the fastest swim time being 3:38 minutes and the field still mostly intact, the swim of the second qualifier was noticeably easier than in the first qualifier, where Luis and Hojo took off. It resulted in nearly the entire field conquering the bike course at the same time. While the fastest men in the first qualifier race could take it easy on the run, as they were already in a good spot after the bike part, the men in the second race had to give it their all on these final two km of running, fighting for the top ten ranking. Jonas Schomburg (GER) was first to leave T2 after the group racked their bike, but Jelle Geens (BEL) and Leo Bergere (FRA) didn’t let him go off, closed the gap and brought the group back together. After one lap, exactly ten athletes were left fighting for these important spots. Just like in the first qualifier race, five men crossed the line simultaneously, all earning a spot for tomorrow’s finals. Out of these five men, it was Jacob Birtwhistle (AUS) who took the win, Dorian Coninx (FRA) who finished second and Bergere who took third.

Later today, the top ten finishers in the repachage race will be added to the start list of tomorrow’s final. A total of 30 athletes will battle each other in the event that kicks off tomorrow at 16:06 local time.