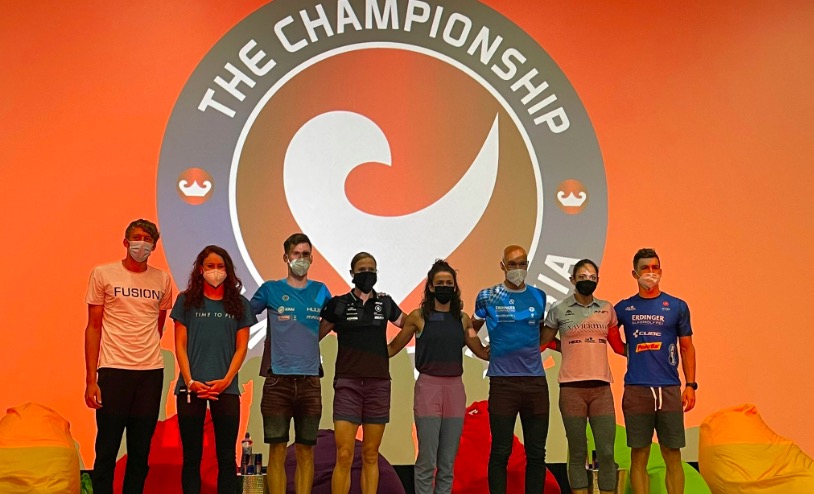 After the Collins Cup tomorrow, world-class racing continues on Sunday 29 August with Challenge Family The Championship. Also at the extraordinary x-bionic® sphere, many of the best athletes in the world will again compete for the win and during today’s press conference it became clear that they all expect a tough race.

Someone who is going for the win in the men’s race is German Frederic Funk. With recent victories at Challenge St Pölten and Challenge Kaiserwinkl-Walchsee, he also seems to be the biggest favourite. “I go into this race with a lot of confidence and I definitely come to win. During the swim I will try to stay with Richard Varga, on the bike with Andreas Dreitz and with the run I want to make the difference.”

As local hero, Varga is also considered one of the favourites and is especially known for his always lightning-fast swim. “Five years ago we could never have expected that a big race like this, would take place here, in Samorin. Now the bar has been raised even higher with first the Collins Cup and then The Championship. A lot of people have come to cheer me on and see the best athletes in the world. There’s no World Championships in Kona this year, but this is kind of Kona for all of us.”

Speaking of Kona, Challenge Family CEO Jort Vlam also made a statement about it during the press conference. “The world is different from two years ago. We feel very sorry for all the athletes, the community and of course the organisation who cannot enjoy a race on the Big Island. As an organisation, we know that it is very sad when a race cannot start. Therefore, we are now very much looking forward to the next three weeks. This weekend the Collins Cup and The Championship, next week the European Championship Long Distance at DATEV Challenge Roth and the week after that the World Championships Long Distance at Challenge Almere-Amsterdam.”

But first up is The Championship, where in the men’s race Andreas Dreitz and Magnus Ditlev are also considered as favourites. “I’ll try to keep my gap as small as possible during the swim and then – on the bike – get close as quickly as possible. We’ll see, there will be guys faster out of the water,” said Dreitz. Ditlev will race with roughly the same plan. “I’m especially looking forward to bike really hard,” he said.

Someone who will also go fast on the bike, but in the women’s race, is Sweden’s Lisa Norden. The multiple national time trial champion, but also very successful triathlete, is looking forward to the new, completely flat bike course on the highway. “Especially since there is a 20-metre-drafting rule. I expect a very fast race and I have the feeling that you have to be good on all three parts to win here. It’s going to be a very tough day.”

Someone who will be at the front during the swim is Britain’s Lucy Hall. “On the bike I also want to ride as hard as possible and then during the run I’ll try to keep it up as long as possible. It’s a smaller, but very strong field. It’s about having a good race plan and sticking to it.”

Sara Perez Sala and Fenella Langridge will also do everything they can to run away with the win on Sunday. “In the swim and bike, I have a lot of confidence,” Perez said. “During the run I will have to work harder, but I feel like I am stronger than in the previous races.” Langridge is looking forward to the Middle Distance race as well. “Coming back to this shorter distance is actually like coming back to the distance I’m good at. It’s definitely exciting.”