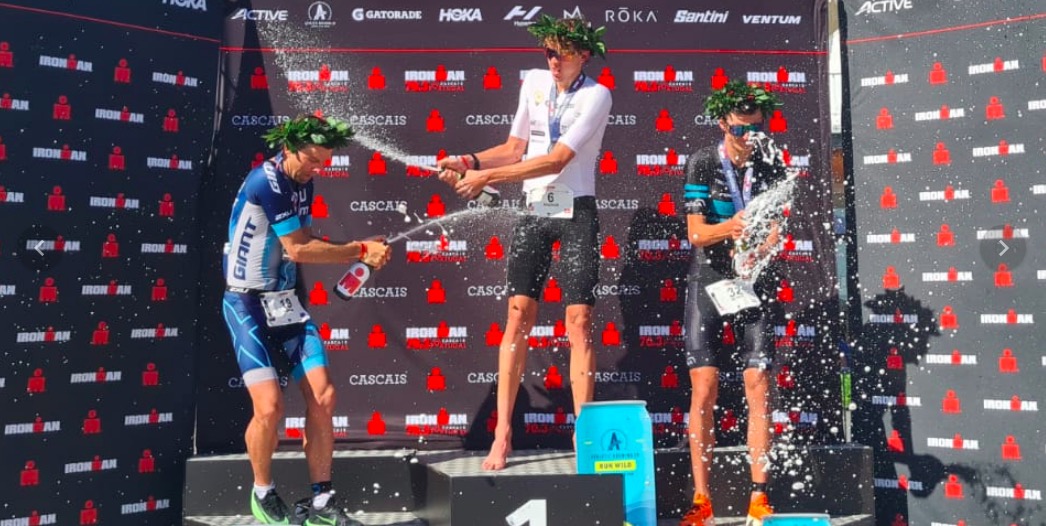 Magnus Ditlev has been in good shape the last few weeks and it showed again today during Ironman 70.3 Cascais. In the women’s race there was a somewhat surprising winner. France’s Marjolaine Pierré made the real difference during the run and thus claimed victory in the end.

During the swim in the men’s race, Ditlev lost some time, because when he came out of the water in eighteenth place after 22:53 minutes, he was 1:22 minutes behind the fastest swimmer of the day, Norwegian Jorgen Gundersen. There was no reason to panic, however, because after 30 kilometers Ditlev had already caught up with everyone and was riding neatly in the leading group.

At that point the leading group consisted of five men; besides Ditlev, the French Clément Mignon, British Jonathan Brownlee, Norwegian Caster Stornes and Australian Aaron Royle were also leading the race. Behind this breakaway a larger chasing group formed, but during the ninety kilometers of biking that group eventually only lost time.

At the front, however, things changed a bit, especially when Ditlev picked up the pace again after sixty kilometers biking and rode away from the other men in the lead group. Ten kilometers later he already had a one-minute lead and in T2 he had added another ten seconds in his favor.

During the run, it was first Stornes who closed half the gap and then Brownlee came dangerously close Ditlev as well, but in the end no one managed to catch the Danish athlete. When Ditlev crossed the line first after 3:47:50, things changed behind him during the final kilometers of the run. Royle ran 43 seconds behind Ditlev to the silver and the Dutch Menno Koolhaas surprisingly took the bronze. He crossed the line 54 seconds after Ditlev.

During the swim it was Lucy Hall who – not entirely surprisingly – set the pace and after 23:28 minutes it appeared that only Norway’s Lotte Miller could follow her. However, Miller immediately lost a lot of time on the bike, while Hall only started to gain more time compared to the rest of the athletes. At the halfway point, she already had a lead of over 3 minutes.

Entering T2, Hall had lost some of her lead, but Kimberley Morrison, at that point second in race, was still facing a 2:29 minute gap. Pierré returned third in T2 and started her run at about the same time.

That run eventually proved all decisive, because halfway through the race the Frenchwoman had already passed Hall and with that she seemed well on her way to victory. In the end this happened, because while Hall dropped far behind in the field, having a tough half marathon, Pierré ran strongly and eventually crossed the finish line as the first woman after 4:17:04. Brazilian Luisa Baptisa came in third (+2:42) and Suisse Julie Derron came in third (+3:30).