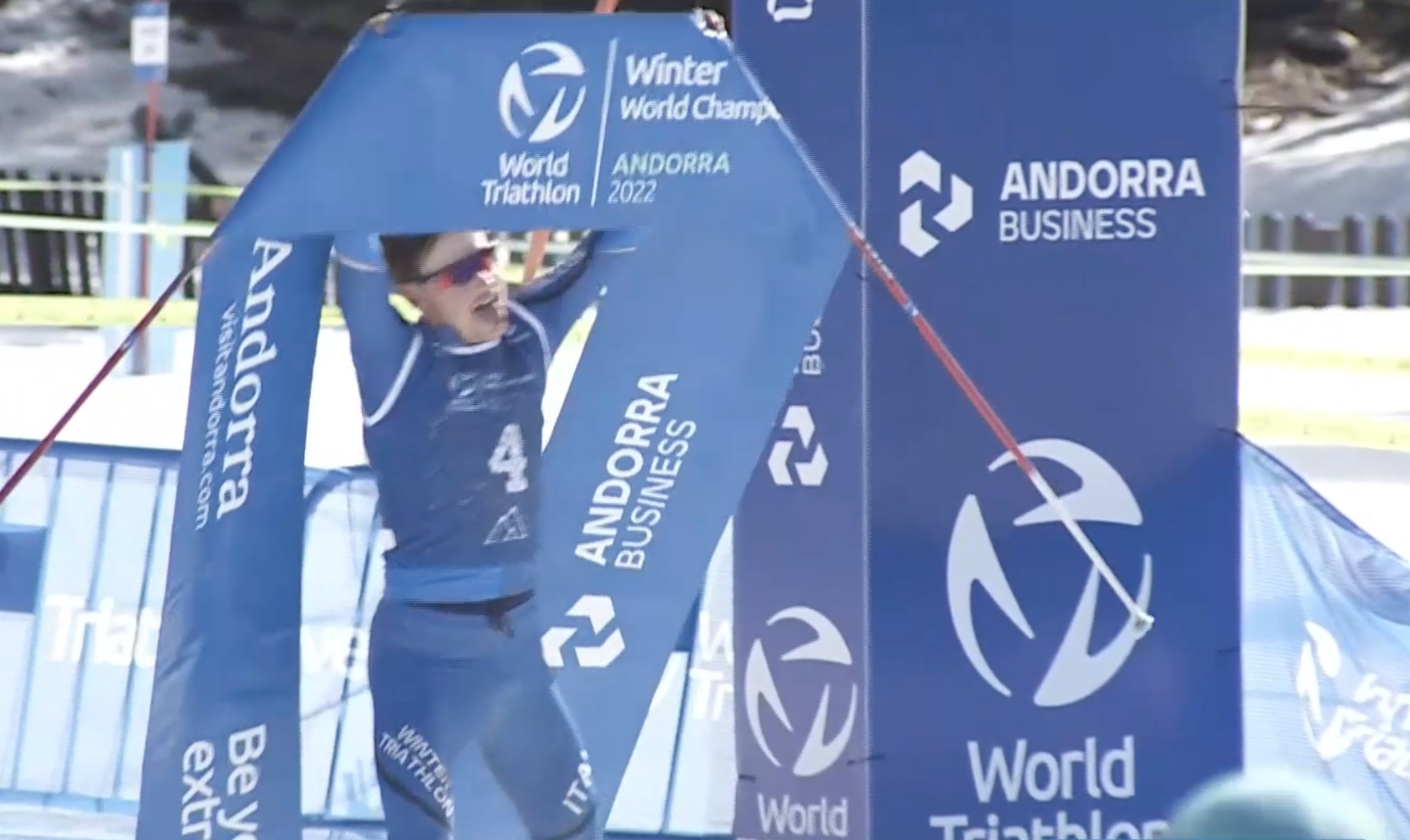 A big win for Italy’s Franco Pesavento. In 1:48:10 hours he was first to complete the double run-bike-ski event, good for a total of 8.1 km of running, 13.2 km of cycling and 12.4 km of skiing. Czech’s Marek Rauchfuss (+0:15) and Russia’s Evgenii Uliashev (+2:40) finished second and third respectively. In the women’s race, it was Russia’s Daria Rogozina who took the win. She managed to stay ahead of, among others, Italy’s Sandra Mairhofer (+3:17) and Norway’s Elisabeth Sveum (+3:44).

During the first run, a group of three men found each other’s company: Pasavento, France’s Krilan Le Bihan and Romania’s Felix Duchampt. On the bike it were Pasavento and Rauchfuss, coming from behind, who rode to the front. On the skis, Pasavento took a lead and by the time he entered the second round of run-bike-ski, he enjoyed a ten-second advantage to the rest of the field.

During the second run, Pasavento extended his lead to over one minute. But it didn’t yet stop there: on the bike, Rauchfuss gave Pasavento a hard time, as he took over and created a gap of 14 seconds. Back on the skis, Pasavento set things straight again, as he skied to the victory, leaving Rauchfuss behind to take second.

Behind them there was an exciting battle for third between Uliashev and Russia Pavel Andreev. Andreev had to sit out a penalty right before the finish line, and as Uliahsev passed the penalty tent on the final stretch, Andreev was ‘released’. With only a few meters difference, Uliashev still managed to take bronze, though.

Big and “easy” win for Rogozina

While the women managed to stay together for the first part of the run, it all fell apart as soon as Rogozina jumped onto her bike and clipped onto her skis. After the first run, it were Rogozina, Mairhofer, Ine Skjellum (NOR) and Svetlana Sokolova (RUS) who entered T1 simultaneously. During the first bike discipline, Rogozina already earned herself a half-minute lead on Mairhofer, who chased. It was only on skis though that the Russian athlete really made the difference. She increased her lead to two minutes, as the athletes entered the second round of run-bike-ski.

With a gap of nearly three minutes between the leader and chasers, the second round was relatively “easy” for Rogozina, as there was no need to dig real deep anymore. Still, she crossed the line with a 3:17-minute advantage to Mairhofer, who took second. Rogozina needed 2:03:59 hours to complete two repeats of 4050 meters of running, 6.6 km on the MTB and 6.2 km of skiing.