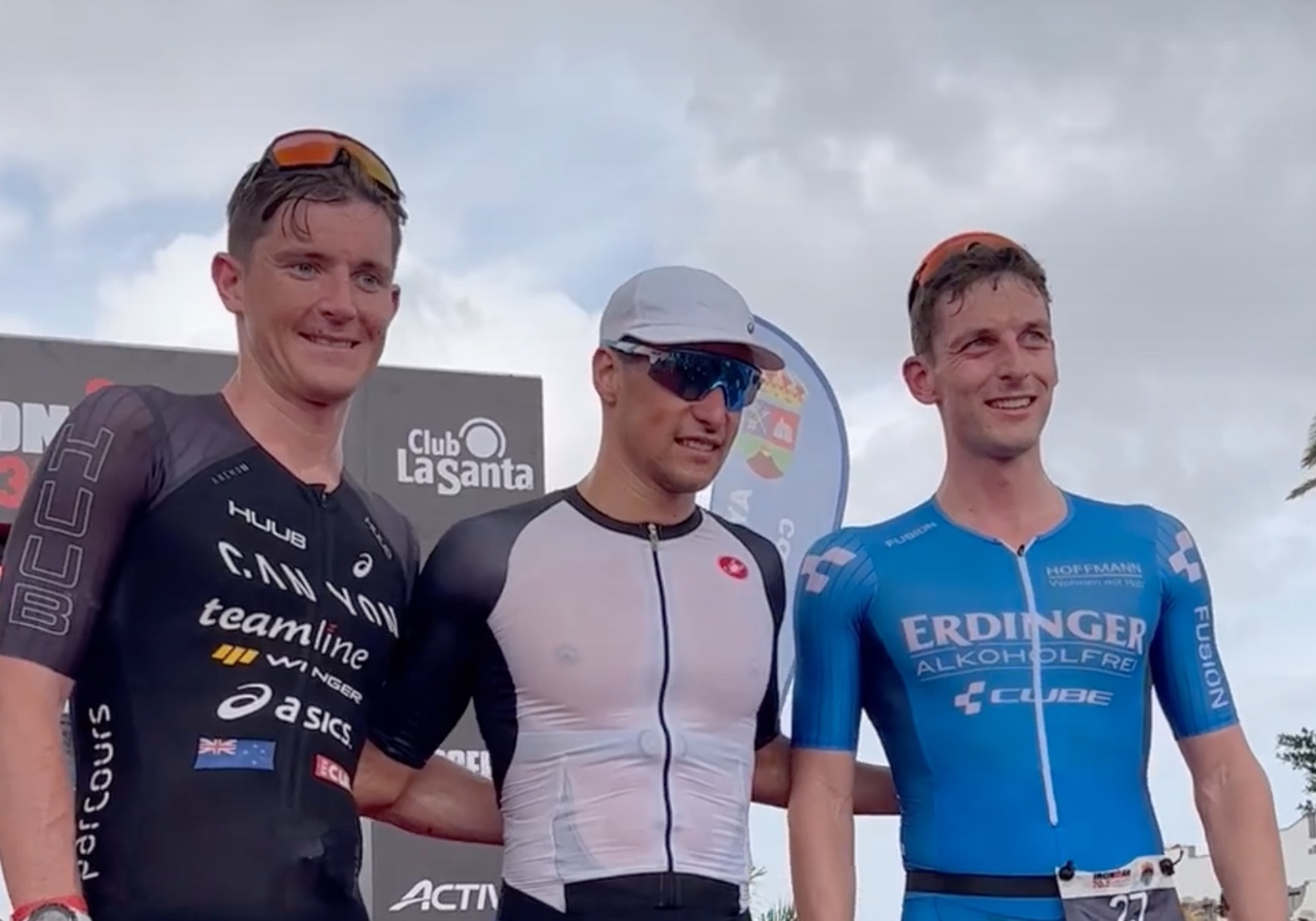 What a performance today by Leo Bergere: the French short-distance athlete took a big win as he explored the longer distances during Ironman 70.3 Lanzarote. It was only in the final kilometers that he was able to get a first taste of the victory, because for a long time it was New Zealand’s Kyle Smith who was in the lead. However, an impressive half-marathon saw Bergere quickly move up to first place.

With a swim time of 21:44 minutes behind his name, it was Short-Distance talent Pierre Le Corre who entered T1 in first place. The Frenchman was soon followed by three other men: Smith, Germany’s Florian Angert and Bergere. Within half a minute a big group followed, counting eight men, among them were France’s Clement Mignon and the Belgian Christope de Keyser.

Once he got to jump on his bike, Smith – who’s better accustomed to non-drafting races – took the lead. Mignon’s 42 seconds deficit disappeared soon as he managed to push some nice watts on the bike. Mignon soon moved up to the front and joined Smith. About halfway through the bike, it were only the two of them who were left in front.

Behind them, Bergere and Angert rode in a shared third place. France’s Leon Chevalier may have needed a bit longer for his swim, as he exited the water in 24th place, at 2:35 minutes from the lead, he was able to move from a 24th to sixth place within 20 km thanks to some amazing bike skills.

During the second part of the bike, Chevalier, Angert, Bergere and Germany’s Boris Stein found each other’s company. Smith and Mignon remained in the lead and entered T2 almost simultaneously. The group of four racked their bikes 1:28 minutes later.

Once on the run, Smith soon took off. Mignon tried everything he could to stay with the Kiwi, but didn’t succeed. Bergere, on the other hand, started to form a threat from behind. With 10K in their legs it was still Smith who was leading, Mignon in second (+0:38) and Bergere right behind him in third (+0:39). it didn’t take long before Bergere passed Mignon.

With only six km to go, Bergere started to really make Smith nervous as there were only 14 seconds left between the two. With Smith in sight, Bergere got that extra bit of motivation to continue his surge. In the final few kilometers, Smith was overtaken, as Bergere ran himself to the first place. That remained unchanged until the finish line, and thus it was Bergere who celebrated his victory and Smith who had to settle for second (+0:26). Angert ended up running to a third place (+1:52), which meant Mignon saw his podium chances vanish at the last minute.

You can read the women’s report of Ironman 70.3 Lanzarote here.