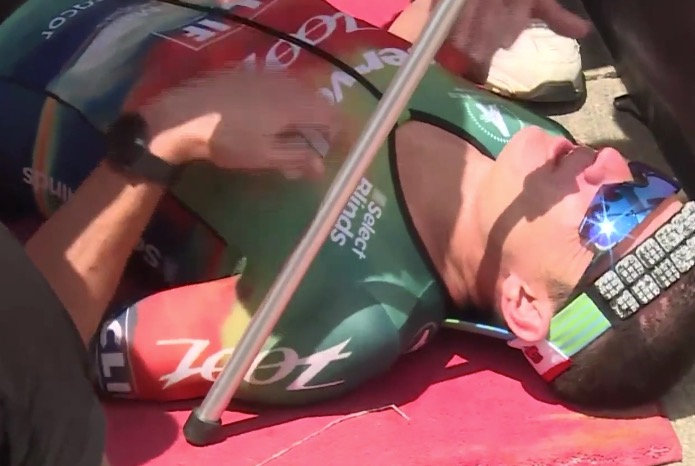 Ben Hoffman and Magnus Ditlev fight side by side for victory Ironman Texas, experienced American wins after thrilling sprint

All sorts of things happened during Ironman Texas, but for a long time Ben Hoffman and Magnus Ditlev ran close together in the battle for victory. Until the very last meters, the two athletes continued to run side by side, making Ironman Texas a blood-curdling race. The win was ultimately for Ben Hoffman, after a thrilling sprint. He finished in 7:57:58.

During the swim, it was Richard Varga who was the fastest, coming out of the water after 47:47 minutes. The Swedish Alexander Berggren was able to keep up with Varga and kept swimming directly behind him. Behind both leaders, a gap of half a minute on Sam Laidlow and more than 2:30 minutes on the next chasers emerged. Hoffman came out of the water in tenth place and was already almost five minutes behind, with a large group behind him including Ditlev.

It was impressive to see that Ditlev rode to the front on his bike very quickly, something he is quite used to. After ten kilometers he had already lost about one and a half minutes and was in eighth place and after fifty kilometers he was in third place – together with Jesper Svensson – and still four minutes behind. Only Laidlow and Varga were ahead of them. Hoffman had a non-functioning chip on his bike and was therefore untraceable in the live timing.

It was clear that Ditlev was riding more and more to the front, only 2 minutes behind after 100 kilometers and after 120 kilometers he had even joined Laidlow and Varga. The men then stayed together for a long time, but with about twenty kilometers to go Ditlev put even more energy in the bike and took over a minute on the others. In the last kilometers, however, Ditlev had bad luck with a flat tire and suddenly lost more than seven minutes to Laidlow and Varga, who were nevertheless the first two athletes to come off the bike. Ditlev and Hoffman then followed as third and fourth, thus trailing by over seven minutes. Svensson was still a few seconds behind them and lay fifth.

While Laidlow then quickly ran away from Varga, it was Hoffman and Ditlev who continued to run very close to each other and took minutes off their backlog. Just past the half marathon point, Varga had already exited the race and Hoffman and Ditlev had also passed Laidlow, who immediately lost minutes and would have no chance of winning anymore. Because Varga abandoned, Svensson advanced to third place.

After just over thirty kilometers, things got really exciting when Ditlev and Hoffman came running side by side, just ten kilometers from the finish. From that moment on it was mainly Ditlev who began to set the pace, although he kept looking over his shoulder to see if Hoffman could still follow and at the same time he did not manage to get rid of him.

Until three hundred meters before the finish the two ran together. Then Ditlev tried to accelerate, but Hoffman countered with a sprint and Ditlev could not match that. Completely cramped, he had to let Hoffman go, who claimed victory after 7:57:58. Ditlev finished in 7:58:12. Svensson became third in 8:08:54.