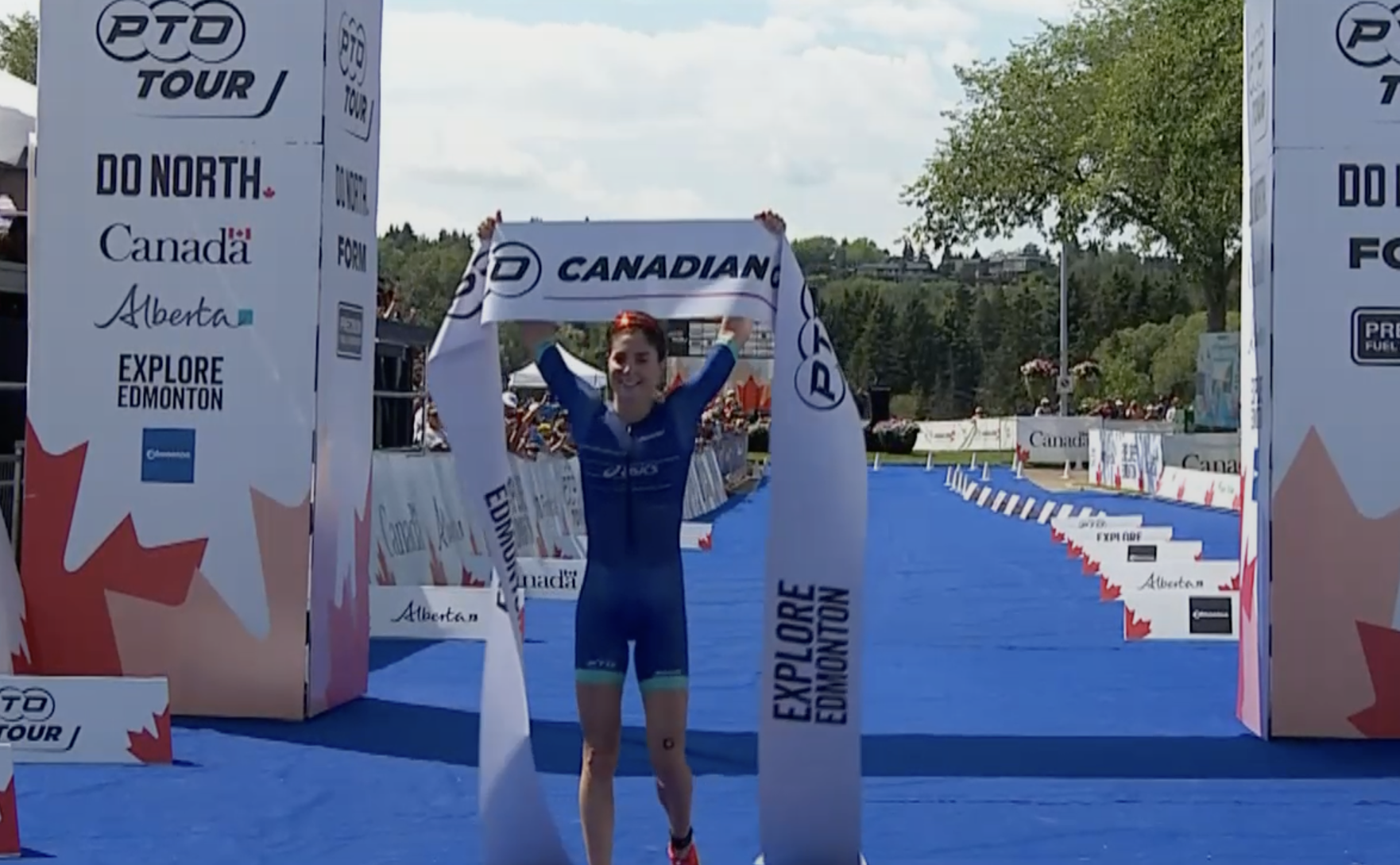 A thrilling run in the women’s race at the PTO Canadian Open saw Australia’s Ashleigh Gentle take off with the golden medal. It was home favorite Paula Findlay who showed herself in front of the race during the bike part, but during the final discipline she couldn’t match Gentle’s strong pace. Findlay crossed the line in second place (+2:22). America’s Chelsea Sodaro ran to a third place (+4:02), as she overtook Germany’s Laura Philipp in the final stretch.

Vittoria Lopes was off to a great start. After a few hundred meters, the Brazilian athlete created a gap towards Spain’s Sara Perez Sala, Swiss Julie Derron, America’s Laura Brandon and Gentle. It was clear that there were a few strong swimmers in front of the field, because soon the field was spread out over one long line with quite some gaps in between.

After 700 meters, a few of the race favorites – like Philipp – already dealt with a one-minute deficit. In the second part of the swim, that gap shrunk a bit, though. Brandon, Derron, Perez Sala and Gentle hopped on their bikes about 20 seconds behind the Brazilian.

On the bike, Lopes managed to maintain her lead for quite a while. However, from behind, some strong cyclists were rapidly moving up in the ranking; among them home favorite Findlay. After 20 km, the Canadian got an eye on Lopes. After that, it was done for the Brazilian, as Findlay took over her leading position. Gentle ended up riding in a shared third and fourth position with Australia’s Ellie Salthouse (+0:30). Swiss Nicola Spirig was a big mover too. She had moved up from 12th place after the swim to 5th place within a few kilometers.

Soon, Findlay was out of sight for her chasers. Behind her, Gentle, Salthouse and Spirig had formed a little group. Eventually, they would catch up with Lopes too. After approximately one hour in the saddle, Philipp came closer to the leading ladies; or at least the chase group. The German athlete slowly biked into the top ten.

Nobody was getting anywhere near Findlay during the rest of the bike part. With a lead of two minutes to her three chasers – Lopes had dropped off and suffered a penalty – the Canadian racked her bike back into T2. Philipp got to put on her running shoes in fifth place (+2:32).

On the run, it weren’t Philipp and Spirig – in contradiction to what most triathlon fans may have expected – who attacked, but Gentle. The Australian started to become a threat to Findlay, who wasn’t able to match her run speed. Within 5K, Gentle had shrunk her two-minute deficit to one minute, while she moved up to second place. After approximately 7 km, it was done for Findlay, as Gentle flew by. Gentle didn’t give up her first place during the rest of the run and ended up celebrating her victory. Findlay hung on for second place, while Sodoro ended up catching Philipp to take third.