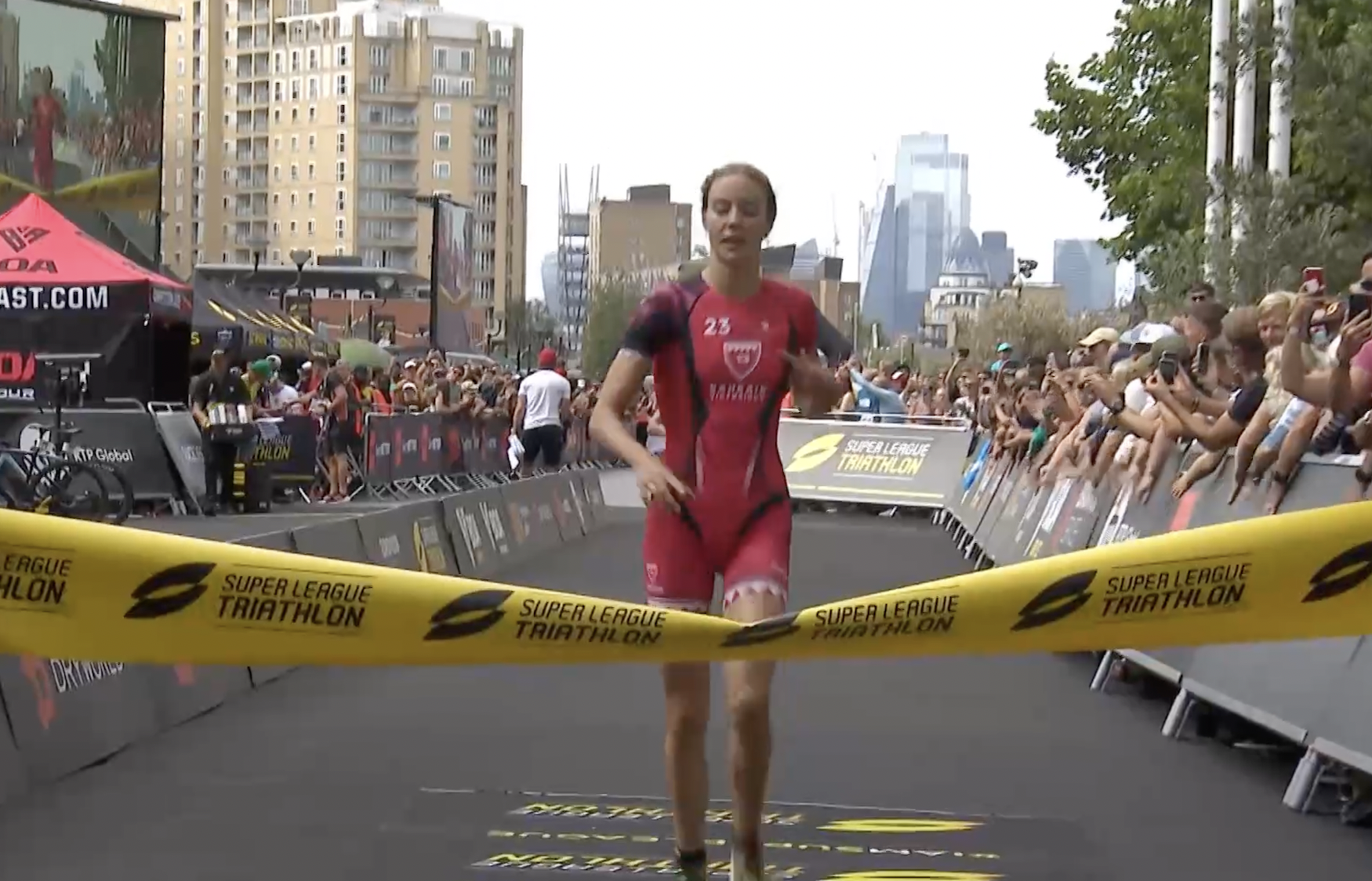 She was consistent throughout the whole race and that eventually saw Cassandre Beaugrand bring home the win after the first Super League Triathlon Championship Series of 2022: London. She shared the podium with America’s Taylor Spivey and Britain’s Georgia Taylor-Brown.

Athletes raced the Triple Mix Format. Which means there were two short triathlons – 300 meter swimming, 4 km of cycling and 1.6 km of running – that would take off following a mass start. The first triathlon would be a classic swim-bike-run, and the second a run-bike-swim. The time difference of these two races decided on the start positions of the third round: a bike-swim-run. Between the first two races, athletes had two minutes of rest. Before the final race, that was four minutes.

After the first swim part, Beaugrand was first out of the water and first onto the bike, which saw her win the first so-called “short chute”, meaning one of her team members could later on take a shortcut. Beaugrand was followed by Jeffcoat, Rainsley, Taylor Brown and then Coldwell.

It was Jeffcoat who rode strongest in the saddle; the Australian athlete was constantly found in the front of the lead group, which was ten athletes strong. A second group was a few seconds behind these race leaders. After the bike part, it was Taylor-Brown who was first in and out of T2, winning another “short chute” for her team.

After a messy start – some athletes were standing at the wrong start line – a few strong athletes had work to do during the run. Beaugrand and Potter took off fast. Beaugrand turned out to be strongest, as she was first to take her bike out of the transition area. Potter was second and Taylor-Brown third.

The first group contained about 10 athletes, but a few of them were dropped before changing to the swim. It saw eight athletes jump almost simultaneously into the water.

Spivey got the advantage of being the first to start the third leg, Beaugrand took off about six seconds later, while Taylor-Brown started in third place with a 10-second deficit. Spivey managed to stay in front for a bit, but eventually Beaugrand, Taylor-Brown and Coldwell caught up with her. Potter wasn’t able to bridge the gap to these ladies and therefor entered the water about 30 second behind them in fifth place.

Spivey was fastest out of the water and therefor first to start the run. Beaugrand and Coldwell started about four seconds later in a shared second place, and Taylor-Brown was about six seconds behind after the swim part. Potter’s deficit had gone up to 50 seconds while in the water; it was clear that the first four ladies would decide on the podium positions.

On the run, Spivey couldn’t keep off Beaugrand, who was running very strong. The French athlete soon came running next to Spivey. Meanwhile, Taylor-Brown bridged the gap to Coldwell, and therefor entered third place. Spivey and Beaugrand were too far out of sight for the British athlete to make a chance to bring home the gold or silver. Just before the finish line, Spivey lost touch with Beaugrand. It was Beaugrand who celebrated the victory, Spivey crossed the line in second place (+0:02) and Taylor-Brown rounded the podium (+0:18).