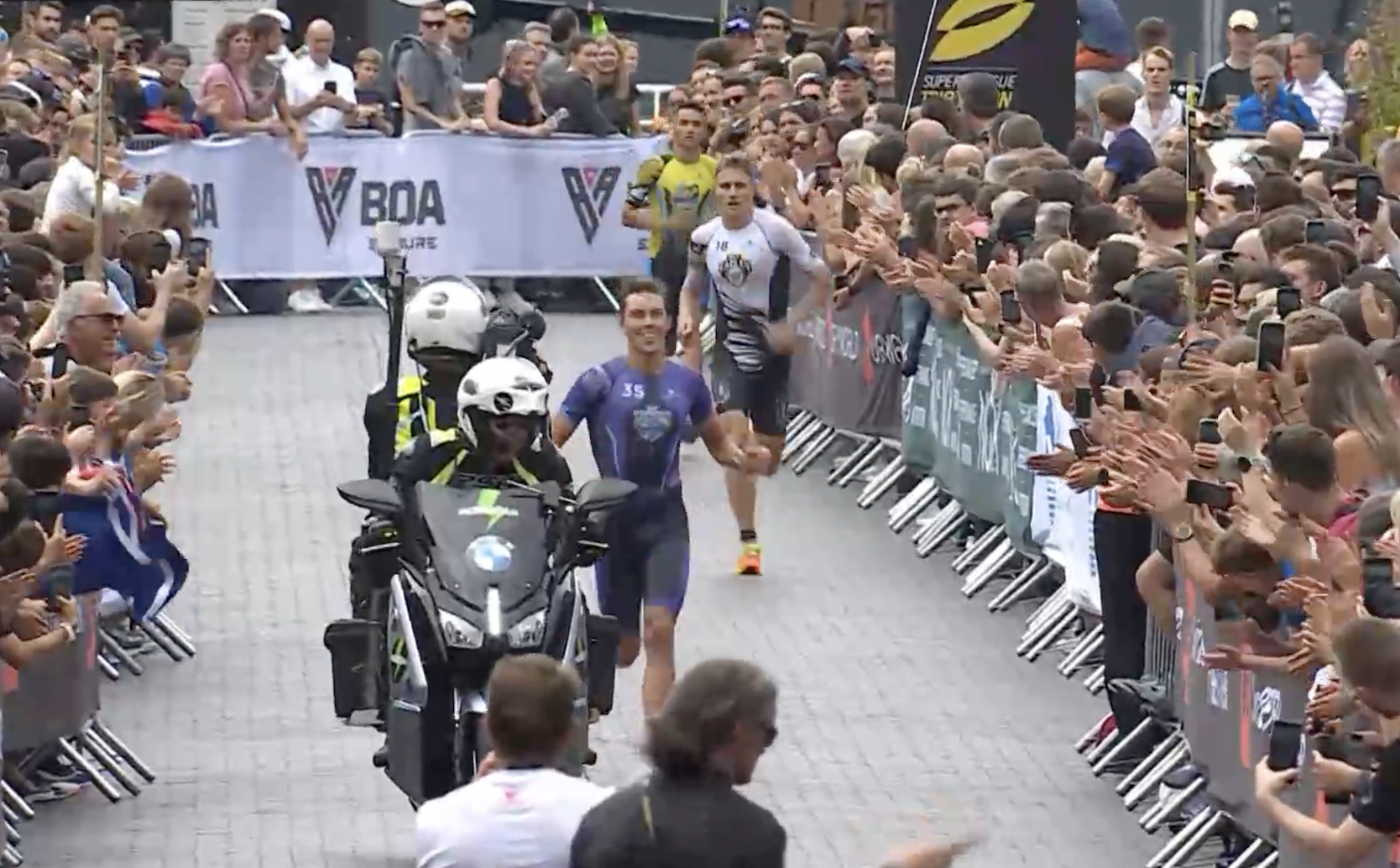 After quite some battles this year were decided in Alex Yee’s favor, today it was New Zealand’s Hayden Wilde who won the SLT Championship Series in London. Yee ended up in third place after he lost some time in the transition area, which he wasn’t able to make up for during the run. Second place was for Australia’s Matt Hauser who had been disqualified in the first leg, but was let back into the race, as it wasn’t clear whether he was the one who made a false start to the race. It may have been frustration that helped Hauser fight back to silver.

Athletes raced the Triple Mix Format. Which means there were two short triathlons – 300 meter swimming, 4 km of cycling and 1.6 km of running – that would take off following a mass start. The first triathlon would be a classic swim-bike-run, and the second a run-bike-swim. The time difference of these two races decided on the start positions of the third round: a bike-swim-run. Between the first two races, athletes had two minutes of rest. Before the final race, that was four minutes.

South Africa’s Jamie Riddle and Australia’s Matt Hauser started their race strong, but also a bit too early. Although, the referees struggled to figure out who it was, it was Hauser who was disqualified after this first discipline. When it later seemed that Riddle was the one that took off too early, Hauser was allowed back into the race, while also Riddle could continue. Whether or not one of them made a false start to the race or not, they enjoyed a nice advantage to the rest of the field when hopping on the bike. It still didn’t take long before some strong cyclists joined them, though. That created a front pack of five.

During the run, Hauser was “suddenly” back into the race. In front of the race, Wilde, Yee and Britain’s Jonathan Brownlee bridged the gap to the first men in no-time thanks to a strong run. It came down to a sprint between the latter three runners, and it was Yee who turned out to have the strongest legs. While Yee took the win, Wilde and Brownlee followed within a second in a respective second and third place.

Wilde and Hauser found each other during the run. Yee kept his cool and ran in a third place behind these two athletes. During the bike, Yee joined them, as the three rode off together. When starting the swim part, they were still right together, but in the water Hauser swam to the front on his own. While Hauser took the win, Yee and Wilde finished simultaneously in second and third (+0:11).

Yee and Wilde were the first two athletes to start. Hauser followed approximately two seconds later in third place. On the bike, Hauser raced to the front, and he didn’t stop there. The Australian worked hard to give Yee and Wilde a difficult time, because waiting for the run with these two likely wouldn’t work in his favor.

Wilde was first into the water after a quick transition. Yee and Hauser followed about two seconds later. In the water, Hauser attacked, but he wasn’t able to get rid of Wilde, who swam right next to his shoulder and wouldn’t let go. Yee was swimming in their feet.

In T2, Yee lost touch with the two leading men, and although he’s a strong runner, he wasn’t able to set things straight today. Hauser dropped back soon, but he still enjoyed a “short chute” so was able to overtake Wilde again. It didn’t take long before Wilde repeated what he did before, and passed Hauser a second time, now for good. Wilde ended up celebrating his victory, Hauser impressively hang in for second and Yee settled in third.