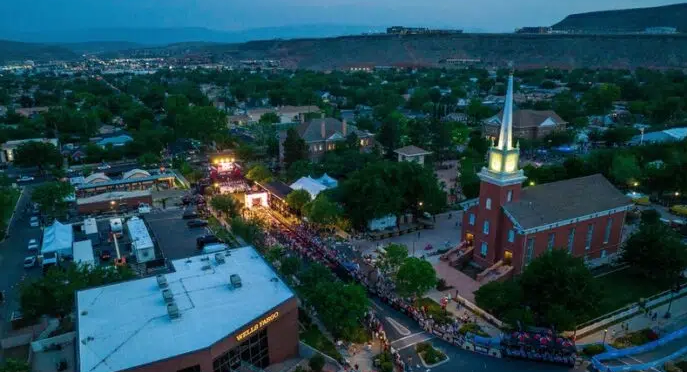 ‘Between the three Ironman and Ironman 70.3 World Championship events in St George within the past 13 months, which took place in September 2021, May 2022, and now, October 2022, the total economic impact generated from the events is expected to be over US$85 million.’

“We are so grateful for the opportunity to return to St George and Greater Zion, for what will be a historic two days of world championship racing,” said Diana Bertsch, Senior Vice President, World Championship Events for The IM Group.

“Our athletes, volunteers, fans, spectators, and staff have been vocal about their love and admiration for this venue as it offers so much beyond race days. Between the local businesses, national parks, and Land of Endurance hospitality, the economic impact from the Ironman 70.3 World Championship is widespread within the region, and it is an honour to once again show the world the beauty and magic that is Greater Zion.”

Along with two days of racing (women on Friday, October 28 and men on Saturday, October 29), nearly a week of side events and festivities, providing activities for the whole family. Activities include: Land of Endurance Fun Run, the Intermountain Primary Children’s Hospital Ironkids St George Fun Run, as well as shopping and exploring local fare in St George’s walkable downtown, or exploring the more than 65 miles of urban trails.

While athletes are also expected to bring friends and family to the Greater Zion region for the event, additional eyes from around the world will be on Utah as both race days will be available through live coverage on Outside TV, with race preview content available on all Ironman’s social media channels.

“The communities and residents in the Land of Endurance are showcasing the incredible sense of optimism and goodness that is here, and the world is witnessing it first-hand. It is thrilling to join with so many in accomplishing something so meaningful.”

St George and Greater Zion has been a host venue for Ironman races since 2010. The IM 70.3 World Championship course starts with a 1.2-mile (1.9km) swim in Sand Hollow Reservoir located in Sand Hollow State Park in Hurricane, Utah.

Athletes then move to a challenging 56-mile (91.3km) bike, making their way through desert landscapes with 3,201 feet (1,003m) of elevation gain and a climb into Snow Canyon State Park and surrounding Washington County.

The 13.1-mile (21.2km) run will then take athletes on two loops through historic downtown St George, where the finish line is located, with the route also showcasing Dixie Red Hills Golf Course (the first golf course in St George) on one end and Vernon Worthen Park on the other.