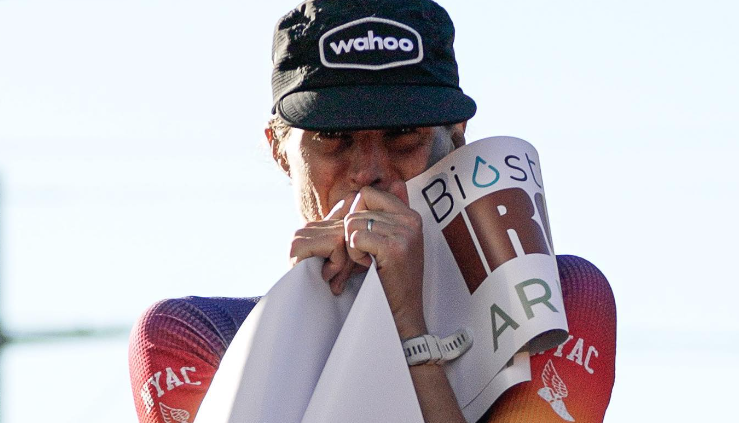 Few people had heard of Joe Skipper in 2017, when he became European Champion Long Distance at Challenge Almere-Amsterdam in a new course record. Now, a few years later, that is completely different and the Brit is seen as one of the best triathletes in the world. This weekend he won Ironman Arizona, while in the women Sarah True proved the strongest.

When Skipper came out of the water, he was still in 11th place, trailing by more than three minutes. Lucky for Skipper, though, was that this put him in a nice group. Fastest swimmer was Andrew Horsfall-Turner, followed shortly by Long Distance debutant Ben Kanute.

On the bike, it was two powerhouses from Skipper’s group who found each other and rode to the front at breakneck speed; Skipper himself, along with Dane Kristian Hogenhaug, who, by the way, has also won Challenge Almere-Amsterdam before (World Championship, 2021, ed.). Already within thirty kilometers the two joined Horsfall-Turner and Kanute, thus creating a leading group of four.

That lead group did not last long, as Skipper and Hogenhaug continued to rumble along on their bikes and slowly but surely their lead over their pursuers increased. It was in small steps, but after 180 kilometers the two had a lead of 5:09 minutes over Kanute, while an also very impressive riding Sam Long followed in fourth at 8:37 minutes. The always strong running Matt Hanson followed in fifth at 13:42 minutes.

During the run, Skipper and Hogenhaug were evenly matched for more than 12 kilometers, but then it was the Brit who – in the part where he often makes the difference – ran away from the Dane. Meanwhile, Kanute held on to third place, although he saw Hanson in particular closing in fast. After just over thirty kilometers, Hanson passed Kanute, while Hogenhaug experienced a difficult run and dropped off the podium altogether.

Sarah True makes the difference at the run

For the women, the race was also evenly matched for a long time and the decision finally fell during the marathon. While Laura Brandon was the fastest swimmer (51:08), Sarah True followed in second at 2:40 minutes and behind her Skye Moench in third at 5:08 minutes. True and Moench soon found each other on the bike and together went in pursuit of Brandon.

It took them quite some time to do so, as about halfway through the bike, the two finally found a connection with the leader at the time, and even though Brandon did try to catch up for a while; it didn’t work. Meanwhile, Moench and True continued to ride together and once they got back to T2, they had a lead of a whopping 8:38 minutes over Brandon. Incidentally, at that point Brandon had already been overtaken by Renee Kiley, who was thus third and began the marathon with a 7:40 minute gap.

While a lot was happening in the battle for third, True and Moench continued to run together for quite some time. Yet it was True who kept running a little faster and had a 34-second lead at the halfway point. Until then, her lead increased only by small bits, but after 21 kilometers, things suddenly picked up and True definitely ran away from Moench. In the end, she won the race in 8:42:38, while Moench finished second in 8:47:28.

In the battle for bronze, there were many shifts: Renee Kiley, Lauren Brandon, Melanie McQuaid, Jen Annett and Danielle Lewis all ran in third position for some time. In the end, it was Lewis who did as she crossed the finish line in a time of 9:03:18.