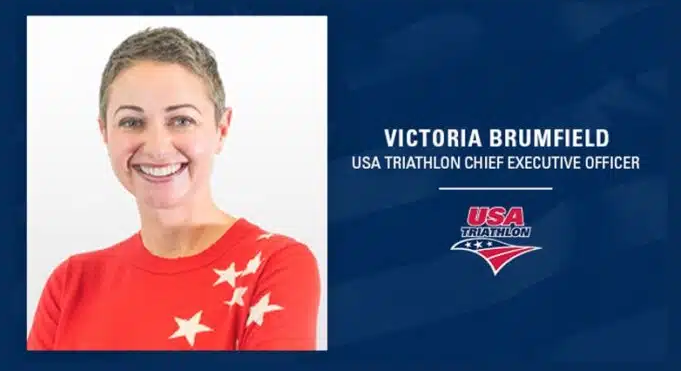 Victoria Brumfield has been announced by USA Triathlon’s Board of Directors Chair Joel Rosinbum as the new Chief Executive Officer (CEO) for the national governing body. Brumfield, who has served as USA Triathlon’s interim CEO since early September, becomes the organization’s first female CEO in its 40-plus-year history. She replaces former CEO Rocky Harris who has moved on to a role at the United States Olympic & Paralympic Committee (USOPC).

“It became clear after a robust global search and rigorous interview process that Victoria is the dynamic leader USA triathlon needs to continue to move forward,” Rosinbum said. “She possesses all the qualities we looked for in the organization’s next CEO – collaborative, creative, forward-thinking, service-orientated, and passionate about the challenge.”

“With a clear long-term vision for both the organization and the sport, a diverse skillset and unparalleled passion, and a distinct approach for uplifting and empowering our constituents, Victoria is uniquely suited to elevate both USA Triathlon and triathlon and multisport in the United States and deliver on the lofty goals set forth in USA Triathlon’s 2028 strategic plan.”

Brumfield has been an executive within the organization for more than four years. Her vision and leadership led the development and implementation of USA Triathlon’s most recent strategic plan –Elevate 2028. This aims to set the path for the organization through the LA 2028 Olympic and Paralympic Games.

“I’m honoured to lead USA Triathlon during such an important time, and I want to thank Joel, the USA Triathlon Board of Directors and members of the hiring committee for the opportunity,” Brumfield said.

“Multisport is transformative, unifying and empowering, and I am proud and ready to wake up every morning and bring this sport and community to more people. I look forward to working closely with our constituents and team to continue to spread the virtues of our sport far and wide, serve our community in a way that enables everyone to prosper, build on the development programs for youth and junior athletes, and celebrate our sport and community every day.”

Brumfield was originally hired as the first female member of the USA Triathlon’s Executive Leadership Team. A release from USAT notes that she has elevated and empowered female leaders within the organization at every level of the organization. Additionally, Brumfield has been a staunch proponent of diversity, equality, inclusion and access (DEIA) during her time at USA Triathlon and worked to make DEIA a focal point of the organization’s long-term strategic plan, annual priorities and hiring processes, among other areas.

Prior to her appointment as interim CEO, Brumfield most recently served as USA Triathlon’s Chief of Staff and Chief Business Development Officer.

‘She led the turnaround of USA Triathlon from a transactional entity to an organization celebrated for its service leadership by fostering a culture of collaboration both internally and externally. With a people-first approach, Brumfield helped USA Triathlon earn best-place-to-work recognition by Front Office Sports, Outside Magazine, and Colorado Springs Gazette.’

In her role as Chief of Staff, Brumfield was responsible for directing strategic planning, managing and streamlining the organization’s operational plan, and overseeing cross-functional projects. She also directly oversaw business administration including human resources, finance, and information technology (IT), for three years.

Brumfield currently serves on the World Triathlon Audit Committee and was a member of the SportsBusiness Journal ‘Game Changers: Women in Sports Business’ 2020 Class.

Prior to USA Triathlon, Brumfield worked in the endurance sports industry for nearly 20 years across a number of roles. Most recently, she was a founding member of the Virgin Sport start-up in Sir Richard Branson’s global Virgin Group.

Before working at Virgin, her roots were deeply embedded in triathlon as the former Event Director for the New York City Triathlon, IRONMAN US Championship, 2003 ITU World Cup in New York City, 2005 ITU Age Group World Championships in Hawaii, and 2004 USA Olympic trials for triathlon, among others.

Brumfield studied finance and earned a Master of Business Administration from the NYU Stern School Of Business. She currently resides in Colorado Springs, Colorado.