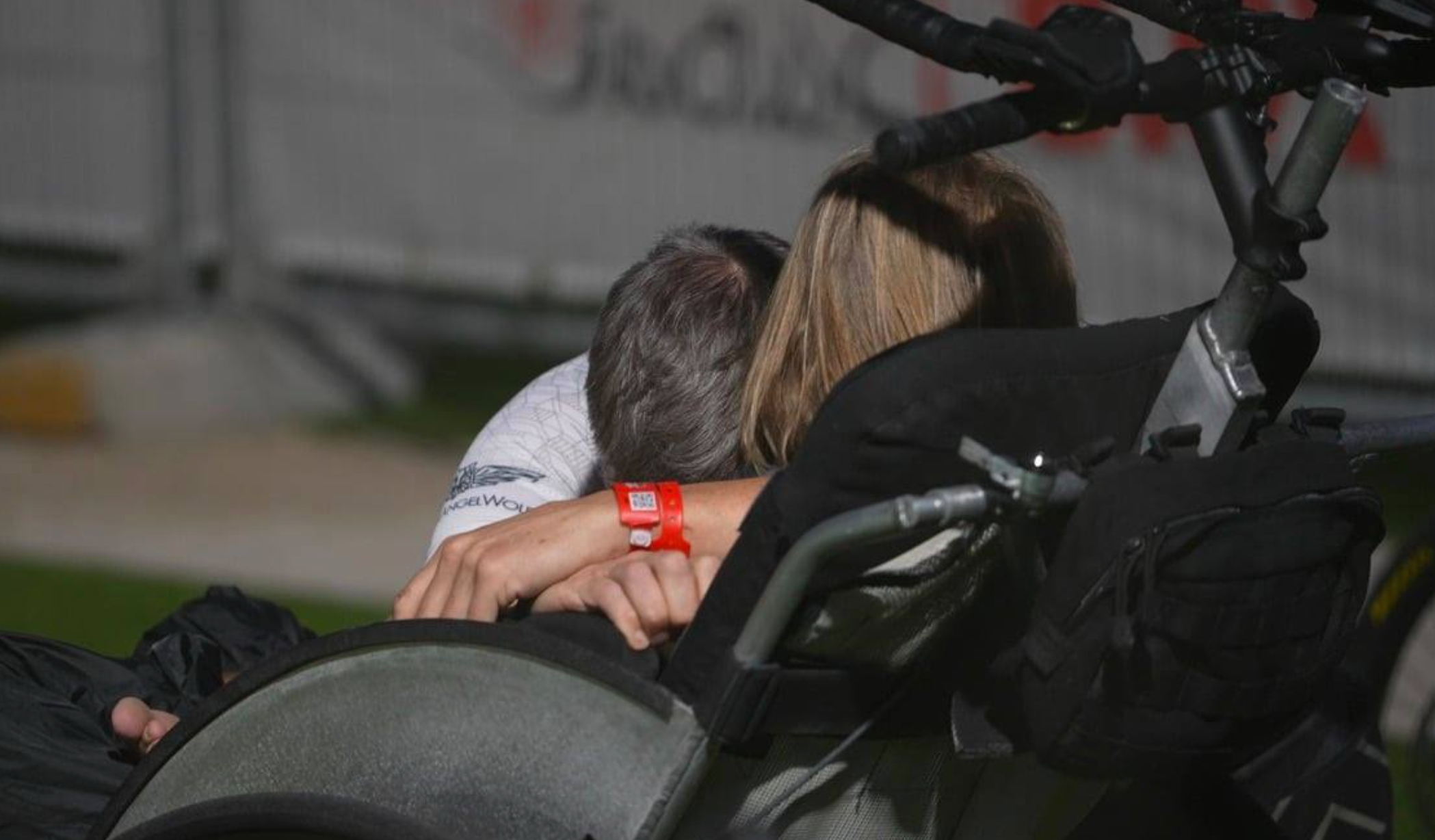 For almost seven years Nick Watson has been pulling and pushing his son Rio at different endurance events, providing similar inspirational finishes that we used to see from another father/ son team, Dick and Rick Hoyt during their many Kona and Boston marathon finishes over the years. Last weekend the Watsons were to compete at Ironman 70.3 Dubai, but were barred from the race.

“A young athlete, whom is a Person Of Determination (with disabilities), racing with inclusion in an Ironman 70.3 triathlon race, is told he is not allowed to participate within an hour before the start! Why?” asked Delphine Watson in a Facebook post. “We have no answers. I just hope that the real reason is not because of an inclusion issue, as that would break my heart into even more pieces than it is already broken into.”

“For those who don’t know Rio; he will be 18 years old in May. He has a rare chromosome disorder called ‘1q44 deletion denovo’; it causes him many disabilities, but it does not stop him from his love and passion for inclusive racing.” Nick and Rio have completed 17 middle-distance races as part of Team AngelWolf, a team that strives for more inclusivity.

‘Rejection is our norm’

Last Friday Rio was to participate in Ironman 70.3 Dubai with his dad. At the very last moment, however, they were told they could not race. The way in which the organizers communicated that message was, unfortunately, nothing new for the Watson family. “Rejection is our norm, but there has now been two huge occasions where rejection has emotionally broken us.”

The first occasion was when Rio was only two years old and his parents thought enrolled him in a nursery school. On the first day of school the teacher said she was unable to deal with a child like Rio in her class. Rio was already interacting with other chilcren, when his mom was asked to meet the Principal. “The Principle asked to see me and basically told me that the teacher had suddenly decided she felt uncomfortable with Rio being in her class/her care. In complete shock, disbelief, pure pain, sadness and anger I had to go back to the classroom and tell Nick that we had to leave as the teacher did not want Rio in her class.”

Years later the family found themselves in a similar situation. “The above was probably the first big shock we encountered,” Delphine continues. “And last Friday, 16 years later, was our latest big slap, and equally as painful and somewhat similar in an odd way.”

A day before the race, an official asked the family about Rio’s age. What seemed like a problem was quickly resolved by signing of a special form. With peace of mind the family went to bed for a short night of sleep.

“We never received that email!”

“Race morning came; I am up at 3am to make my amazing team porridge, get everything ready before they get up. Rio wakes up very excited saying ‘race – my best race’ as his first words.” Getting all their equipment together, the Watson family left for the race. After getting everything prepared, someone came up to the family to tell them Rio wouldn’t be allowed to start. The Watson family explained the situation of the day before and explained the problem was already solved. According to the man an email was sent to Nick at 1 am that morning saying Rio couldn’t start the race. “We still have never received that email to date!”

The family already felt confused and sad for Rio, when things got even worse. “In the middle of all this emotion and confusion I am then questioned why Rio is not wearing a mask. I explain he has an exemption with his disabilities. I am asked to prove the exemption, I show the exemption form, to which I was then questioned how I could prove that the exemption form belonged to Rio. Shaking with emotion and in tears I had to find his ID while on my knees emptying the contents of my bag on the floor,” Delphine writes.

“This made absolutely no sense to him!”

While athletes started their races and dove into the water, the Watson family started to pack their things to return home once they realized that Rio wouldn’t be allowed to compete. “We packed up all our gear, in tears and surreal disbelief, left transition and put our equipment back in the trailer. Rio was absolutely devastated getting back into the car, he fought his best not to get in, very upset. This made absolutely no sense to him! It was heartbreaking to witness.”

“It was very cruel and heartless”

There still hasn’t been any explanation from Ironman on how this could have happened. The Watson family feels sad looking back at the whole situation: “If someone had said when we registered that Rio wasn’t allowed to race (or even absolute worse case scenario the day before the race), we would have been upset, but we would have had to eventually and respectfully accept it; but I feel my son was shown absolutely no respect by not informing us and by allowing Rio into transition on race day, allowing him to be around all the athletes (his friends), allowing him to start walking towards transition exit to the start line, to then hear a definite ‘Rio is not allowed in this race’. It was very cruel and heartless.”