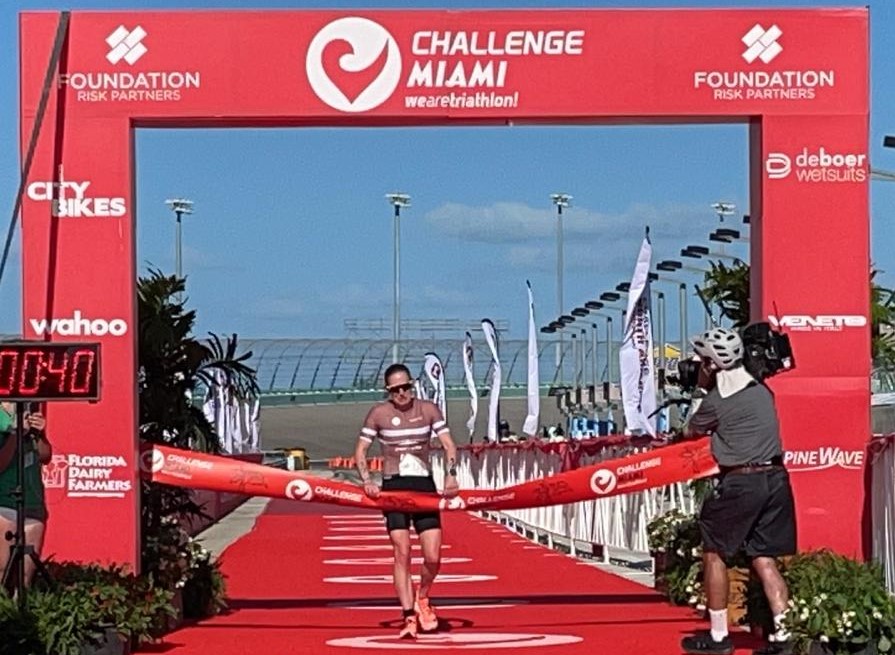 Long renowned as one of Great Britain’s top draft-legal racers, Jodie Stimpson proved her long-distance chops today with a big win at Challenge Miami over a stellar women’s field. The race was filled with drama even before things got started – we learned first thing this morning that one of the favorites, Anne Haug, wouldn’t be able to race because of a positive COVID test.

You can find the report of the men’s race here.

Charles-Barclay and Perez lead the swim

There were no surprises when the horn went off to start the women’s race as former national team swimmer Lucy Charles-Barclay surged to the front, The only woman who was even remotely capable of staying with the Brit was Spain’s Sara Perez. The two exited the water with a whopping 1:40 lead on a group of three that included PTO 2020 champ Paula Findlay along with British athletes Jodie Stimpson and Fenella Langridge. American Meredith Kessler was 2:11 back in sixth.

It was Perez who was quickest out of T1 since she wasn’t wearing a swimskin, and the Spaniard took the lead for the first five laps of the bike. The first chase group of Findlay, Stimpson and Langridge gained some time on the leaders until Charles-Barclay decided it was time to go to the front – within a few laps the lead was back up to 1:50.

Perez would pull up a bit as she started the final lap of the bike appearing to cramp, which allowed Charles-Barclay to lead into T2. (The Spaniard would end up passing the Brit right on the dismount line when Charles-Barclay crashed on the line.)

Time in the penalty box

Charles-Barclay would have to watch as Findlay and Stimpson ran by as she waited in the penalty box – watching her lead of over two-minutes off the bike evaporate.

Out on the run Perez was clearly struggling compared to the women chasing behind – Stimpson and Charles-Barclay would work together through the first 8 km and steadily gain ground as Findlay started to drop back dramatically. Stimpson would eventually pull clear of Charles-Barclay and take the lead, passing Perez before the end of the fifth of seven laps and never looking back as she cruised through the rest of the run for a solid win.

You can find the results of the women’s race here.

We caught up with the top women after the race: