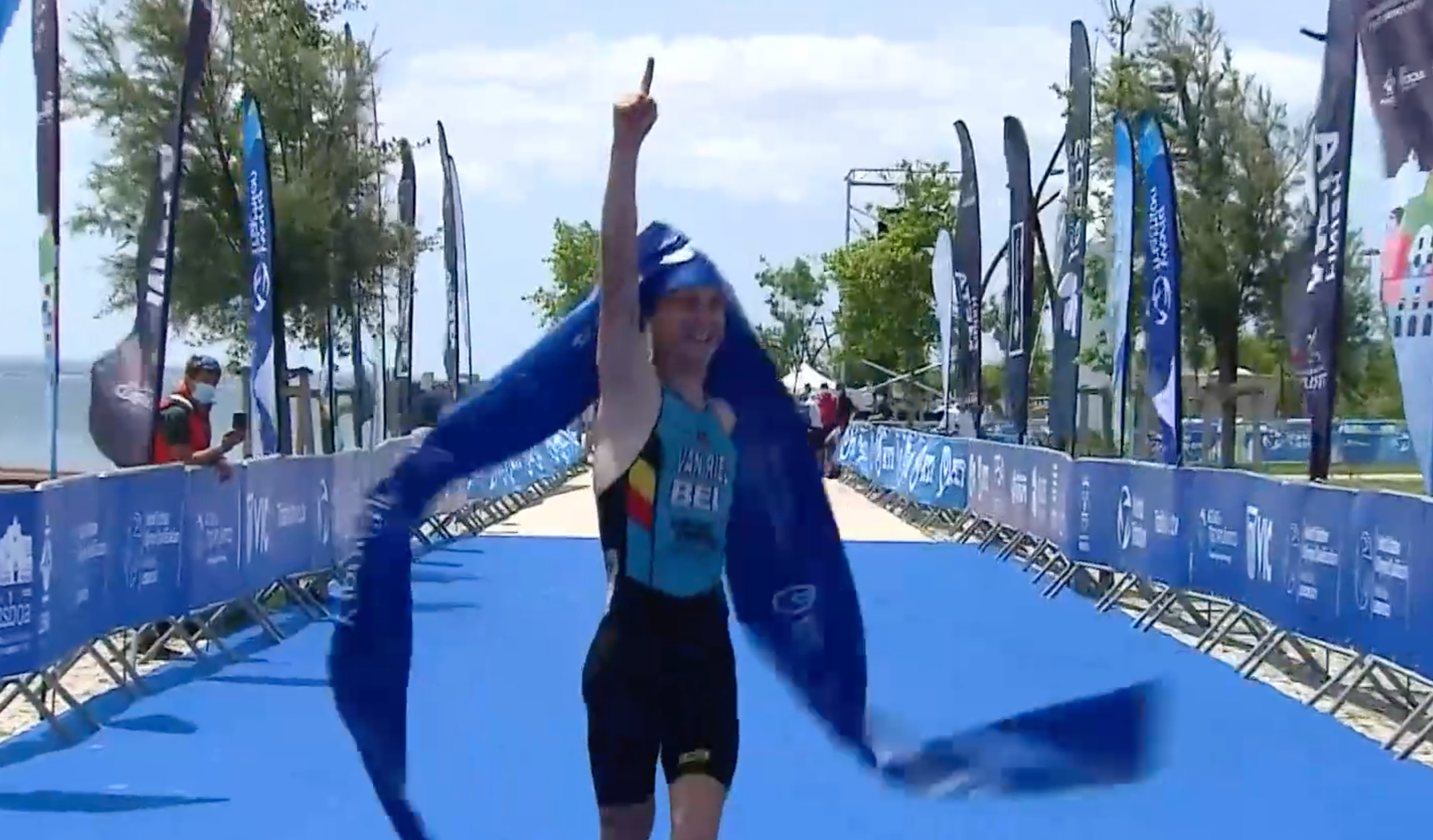 There was a lot at stake today for the triathletes of seventeen nations that weren’t already qualified for the Olympics. Thanks to a big win at the World Triathlon Mixed Relay Olympic Qualification Event in Lisboa, the Belgium team – consisting of Claire Michel, Jelle Geens, Valerie Barthelemy and Marten van Riel – is now sure of an Olympic slot. Italy and Switzerland – who finished second and third – claimed a slot for Tokyo, too.

In the water a small gap was created by Ireland, Portugal, Norway and Italy. While Chloe Pollard – representing Ireland – opened strongly and reached her bike in first place, she soon dropped back once in the saddle. After one loop on the bike, ten athletes found each other’s wheels to form a pack. Hungary, Ireland, Russia, Brazil and Mexico missed the boat and ended up in the back of the field. In the second transition the front pack of ten was still together. During the run Denmark soon took the lead, which they managed to maintain until the start of the second leg. Italy, Switzerland, Belgium, Austria, Spain and Norway were still right in the mix and followed only a few seconds later.

During the second swim leg the field split into small groups. Italy, Switzerland and Denmark were on the right side of this split as the three countries took the lead and enjoyed a nice advantage starting the bike. With Jelle Geens for Belgium, Kristian Blummenfelt for Norway and Fernando Alarza for Spain chasing them down, the front pack had to work hard to maintain their lead. Even though the gap was slightly smaller by the time they reached T2 – it was about 25 seconds at the start and 15 seconds after the bike – Italy, Switzerland and Denmark were still in the front during the run. However, Geens and Blummenfelt worked hard to try and catch them. They managed to come a lot closer, but didn’t catch them before the third leg.

With Nicola Spirig ready for the third leg, it seemed like Switzerland was going to set the pace in the water. Spirig however soon drifted off course due to some strong currents and found herself in a third place after the swim. Italy’s Alice Betto reached her bike in first place. Belgium followed in second (+0:07), Switzerland in third (+0:13) and Denmark in fourth place (+0:17). Despite all the hard work by Blummenfelt during the second heat, Norway lost the group and exited the water in fifth place, 33 seconds behind the Italians. Betto was able to stay in the lead during the bike for quite a while, but at the top of the steep hill on the bike course Belgium, Switzerland and Denmark found her wheel. Norway couldn’t make up for the time they lost during the swim and seemed to stand no chance of reaching the podium. Spirig had a strong run and created a nice gap for the start of the last leg. Belgium followed in second place (+0:09) and Denmark in third (+0:13).

With Marten van Riel anchoring the team, Belgium soon found their way back to the front during the swim. After a quick transition, Van Riel took off on his own on the bike. Switzerland, Italy and Denmark followed in second to fourth places. Enjoying a gap of about twenty seconds, Van Riel seemed untouchable for the rest of the race. With a strong bike and run, Van Riel finished it off in style. Belgium took the win and claimed their ticket for Tokyo. After an exciting sprint for second and third, Italy took silver and Switzerland ended up with bronze.