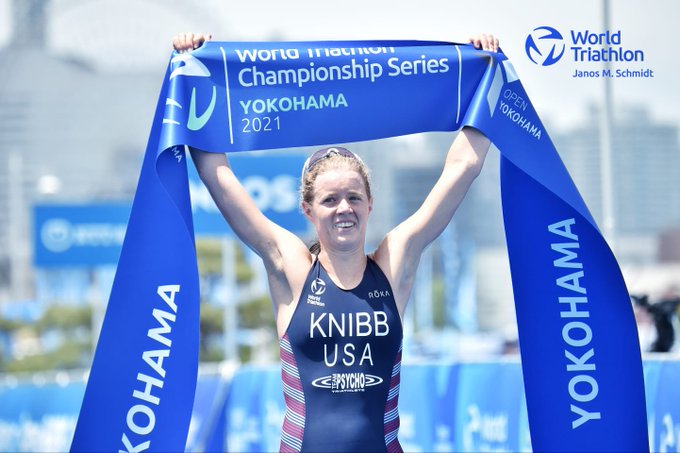 Knibb earns Olympic spot with brave breakaway on the bike

It wasn’t a surprise to see an American dominate the women’s race at the World Triathlon Championship Series (WTCS) Yokohama today, but the woman who eventually took the day, Taylor Knibb, didn’t start as one of the American pre-race favorites. With the entire 2019 Yokohama podium – champion Katie Zaferes, runner-up Summer Rappaport and bronze-medalist Taylor Spivey – in the field, and Olympic qualifying on the line, those three were expected to battle for the win.

Breakaway on the bike

Rappaport, who had earned a qualifying spot for Tokyo thanks to a sixth-place finish at the Tokyo Test Event in 2019, came out of the water alongside Portugal’s Helena Carvalho and the Netherlands’ Maya Kingma. It was Kingma, though, who blasted out of transition to set the tone on the bike early. It quickly became apparent that something was awry with Zaferes, who was well back after the swim. According to race commentator Helen Jenkins, Zaferes had lost her father a month before the race and was still struggling emotionally with the loss.

Initially there was a lead group of 15 on the bike, but when American Taylor Knibb started to exert some pressure at the front, that quickly dropped down to 13. Eventually, though, the chase group managed to bridge up to the leaders, but Knibb and Kingma made a strong move to the front just as the groups joined, creating their own breakaway on the third of the eight laps. Zaferes continued to move back and would eventually end up in the third chase group.

Kingma and Knibb worked really well together out in front and steadily pulled clear of the large chase group. Kingma was the quicker of the pair through the technical sections of the ride, while Knibb powered away in front over the straightaway sections of each lap. The combination allowed them to gain more time each lap on the chasers – at the end of four laps the gap was 32 seconds, 55 a lap later, and by the end of the seventh the lead was 1:34.

Holding on through the run

Knibb and Kingma hit T2 with a lead of 2:05, with Kingma blasting through the transition to lead the way onto the run. The Dutchwoman flew through the first km of the run, but Knibb stayed close and eventually took the lead, opening a gap of five seconds by the end of the first of four laps. The 23-year-old American then powered through the rest of the run, losing a bit of time to the speedy runners behind her, but not that much. Her lead was 36 seconds on Kingma after the second lap, with Rappaport running herself into third, 1:37 down.

With one lap to go it was apparent that Knibb was on her way to nailing an Olympic birth – the first American on the podium was guaranteed a spot on the team. Behind her, though, the action got really exciting. Kingma gallantly pushed on, but her lead on Rappaport was down to 17 seconds, with Great Britain’s Sophie Coldwell and Non Stanford, American Taylor Spivey, Spain’s Miriam Casillas Garcia, Austria’s Julia Hauser, France’s Cassandre Beaugrand, Beligium’s Claire Michel and the Czech Republic’s Vendula Frintova all another 13 seconds behind Rappaport.

Rappaport eventually moved into another gear, passing Kingma with just under two km to go, but the Dutchwoman hung tough to stay close to the American to guarantee herself a spot on the podium.

“It was not really thinking, it was just doing,” Knibb said of her gallant effort. “Maya was really strong on the technical sections.”

“Knibb was very strong – she escaped and I went with her,” Kingma said of the two-woman breakaway. “She was so strong on the straightaways. I wanted to help her, so I tried to lead the technical parts. I was trying to keep her wheel.”

While Zaferes would eventually gather some momentum on the run and move herself to 22nd spot, her finish will make life difficult for those responsible for selecting the third woman on the US team who will likely have to pick between her and Spivey for the final spot.