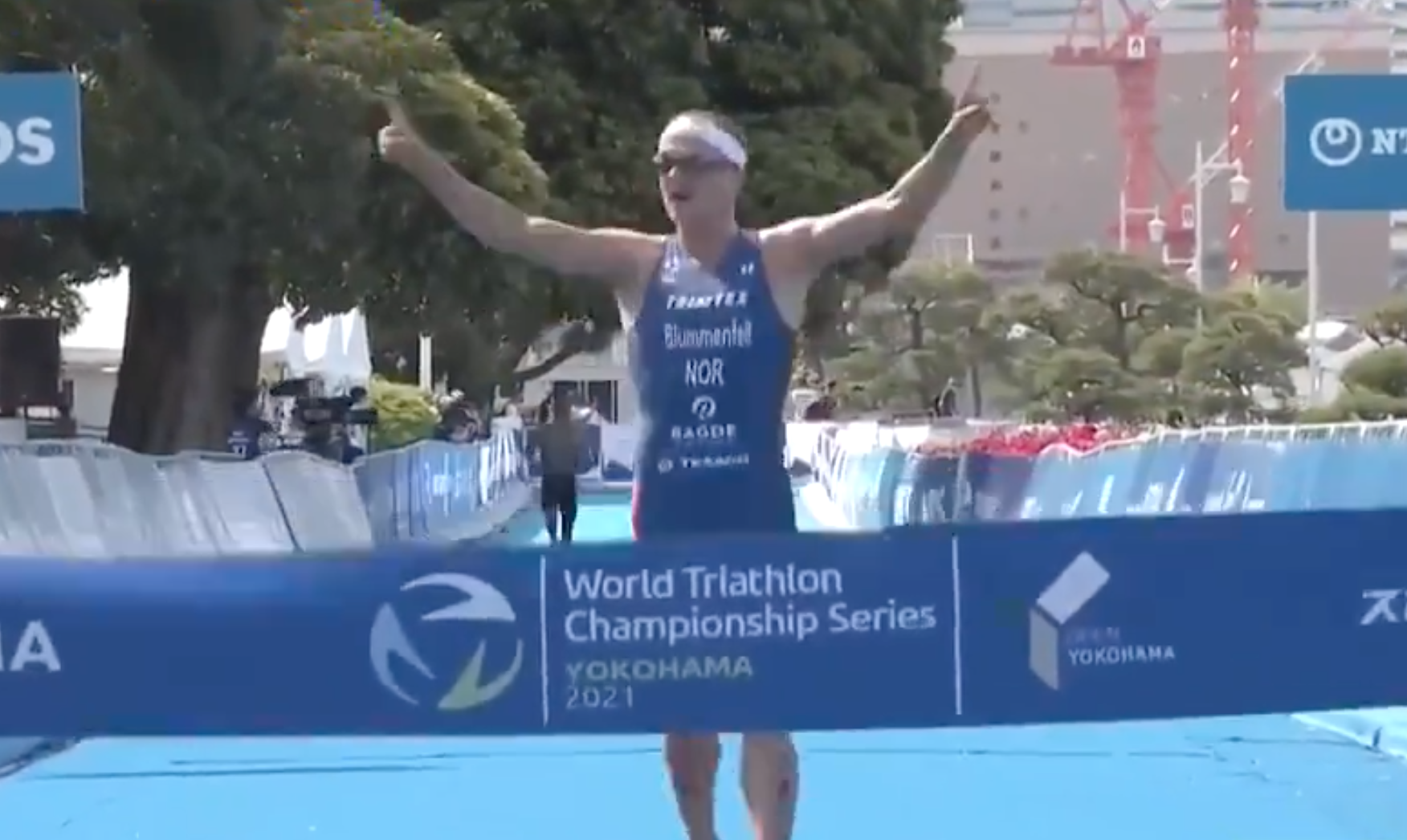 Kristian Blummenfelt runs to a strong win at WTCS Yokohama

Kristian Blummenfelt showed he is ingreat shape by taking a strong win during the World Triathlon Championship Series Yokohama event. The athlete needed to be patient on the bike, as most of the field was still grouped together after the first two disciplines. On the run, though, it became clear that nobody was going to match Blummenfelt’s run skills today. The only one who kept up with him for most of the run was Belgium’s Jelle Geens, who finished in second place. Behind him there was a tough battle for the last podium spot. America’s Morgan Pearson was the one to take that last spot, which meant he automatically qualified for the Olympics. It was an emotional race for Pearson, who after the finish mentioned the hard time he’s been through since he lost his brother in March this year.

It was no complete surprise that Vincent Luis took the lead during the swim leg. In 18:57 the French athlete completed that first discipline. Just a stone’s throw away from him a long line of athletes followed in his footsteps. First in line was Jonas Schomburg (GER) followed by Pierre Le Corre (FRA), Marten van Riel (BEL) and Jonathan Brownlee (GBR). Someone who was clearly missing in the front of the field, was South-Africa’s Henry Schoeman, an athlete that often leads the swim. Schoeman reached his bike in 14th place today and dealt with a twelve-second gap to Luis.

In the first minutes of the bike, a few small groups were formed. A leading group of nine men, a group of ten chasers, and a handful of athletes in a third group. After the first lap these athletes found each other’s wheels and created a large front pack of 22 athletes. Schomburg was brave enough to try and go off on his own to see if he could split the group, but he only managed for a few minutes before he was caught again.

Nearly all race favorites were in the front about halfway in the race. A few big names that didn’t make the cut, were Geens, Gustav Iden (NOR) and Alex Yee (GBR). As a strong biker with quite some middle distance experience by now, Iden mostly set the pace to try and reach the front. Yee – known as a very strong runner – probably trusted his legs to put together a great final discipline. That this chase group worked together very well, could be seen in the lap times. Slowly, but surely the group closed the gap.

After 6/9 laps the group led by Iden managed to catch the front pack. That meant a huge group of 41 athletes was getting ready for a big battle on the run. The Norwegians – especially Iden and Blummenfelt – didn’t seem to fancy that idea, and so they tried to give the group a hard time by setting a high pace in front. Still, the group stayed intact and that meant these 41 athletes needed to give it their all on the run.

It was Schomburg, Geens, Blummenfelt and Yee who took off the fastest. It first seemed like Schomburg was going to be the strongest of these four, but he soon dropped back. Later also Yee had to let go, and while he kept pushing for a podium spot, he was chased by Pearson who showed incredible running shape and fought for a direct Olympic qualification.

In the last 500 meters Geens had to accept that he wasn’t able to match the speed of Blummenfelt anymore. The Norwegian took off and finished with the gold medal. Geens took home silver and Pearson managed to catch up with Yee and complete the podium.