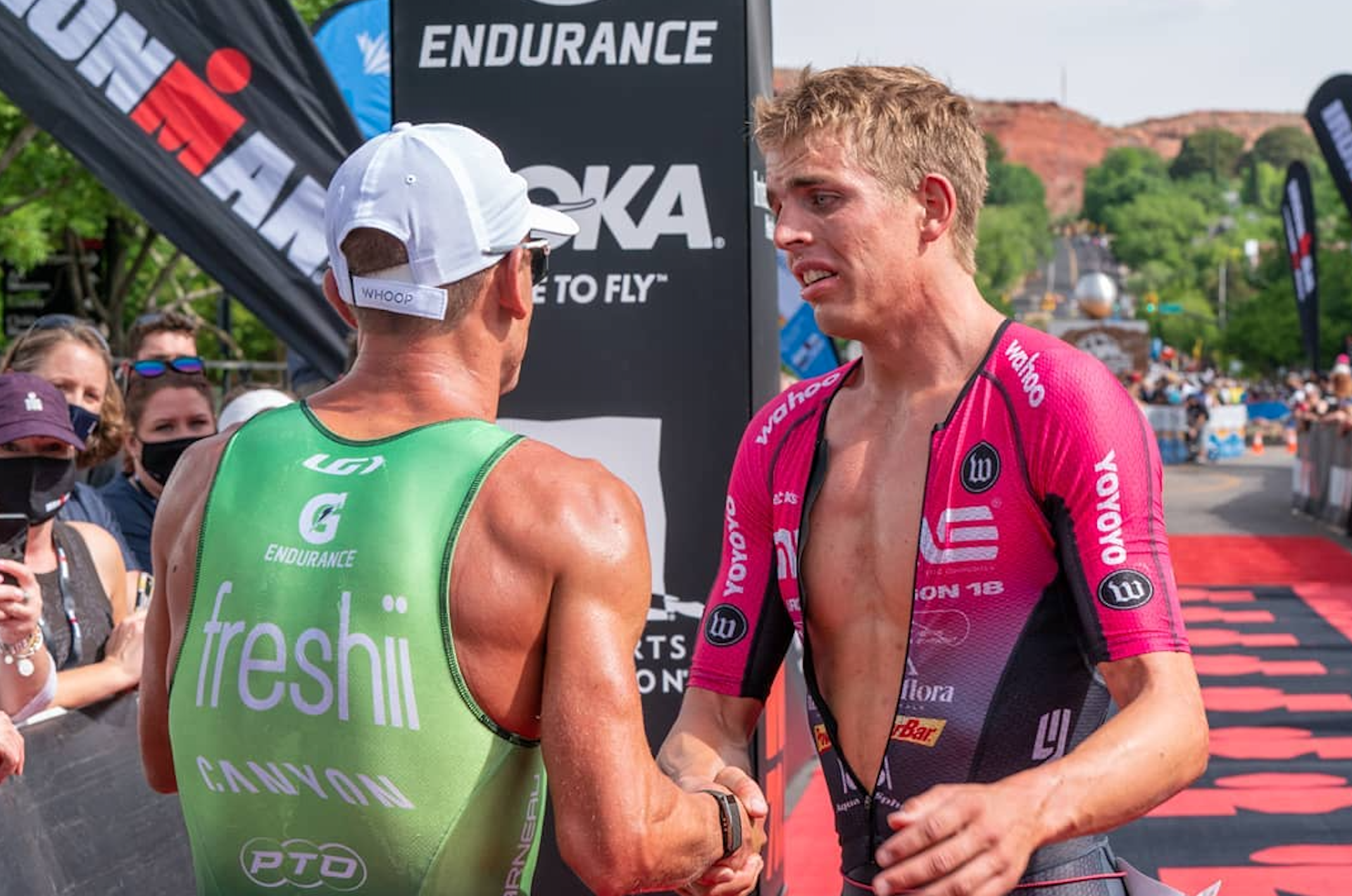 America’s Sam Long has really started to show his potential as races got back on the calendar after a mostly quiet 2020. With his runner-up finish yesterday at Ironman 70.3 St. George Long proved what he’s capable of, finishing only meters behind his idol Lionel Sanders. “To be honest, it’s making me speechless,” Long said right after the finish when he was asked how it feels to hear Sanders say that nobody ever pushed him this much. Just a few years ago Long was still racing as an age grouper, finishing half an hour behind Sanders, but this weekend he took a place right next to the Canadian on the podium. “I’ve dreamed about this day for five years,” he said.

Long: “I was baking on the downhills”

“To be coming out here and racing stride for stride with my idol…sure I got second, but this was everything I ever dreamed about,” Long continued. “I couldn’t be happier.” With the finish line in sight it turned out Sanders could dig just a little deeper and push for a final sprint. “Oh man, I’m just a big unit,” Long laughed, referring to his nickname. “He was faster on the uphills, I was baking on the downhills. But I got close, and it was just epic.”

Sanders: “I never went that deep, that far into a race”

Long wasn’t the only one “baking.” “That’s the most I think I’ve ever suffered,” Sanders said after the finish. “That is probably the best battle. I never went that deep, that far into a race. Hats off for Sam Long. His progression is amazing. The guy is a hard worker. This was just a pleasure…but not during”, Sanders laughed. “Afterwards…now when reflecting. It’s a pleasure to race him.” Sanders warned people to keep an eye out for Long: “This guy has got to be the hungriest guy on the earth right now, so watch out.”

Sanders: “It just brought me the tears”

Sanders was clearly emotional after crossing the line. “It’s just that we had this pandemic thing,” he explains. “We have been off racing and I miss racing so much. But, what I really miss is that, right there: the battle. A good battle. And I got a good battle. Win or lose, it doesn’t matter what side you’re on. When you’re part of a good battle, and you give it everything…it just brought me to tears. There is no greater feeling.”

Long: “This was the game plan”

Back to Long, who couldn’t have executed his race plan any better than he did. “This was the game plan. There were three critical moments in the race for me. The first was the start of the race – the swim – and I had my best swim. Second was Snow Canyon (the day’s biggest climb). The sort of idea was that I would slowly level up gas and get people to go with me. I would slightly over bike to wear their legs out. The third was the final 5 km. I knew I would struggle on the uphill a bit with the lighter guys. But I’ve said the final 5 km I would open it up, so that’s what I did, but it wasn’t quite enough,” he laughed.

In a few months time St. George will host the Ironman 70.3 World Championship, so this weekend’s race made for a great rehearsal. “It definitely gets me hungry for the world championships and Ironman Tulsa in three weeks time,” Long said.