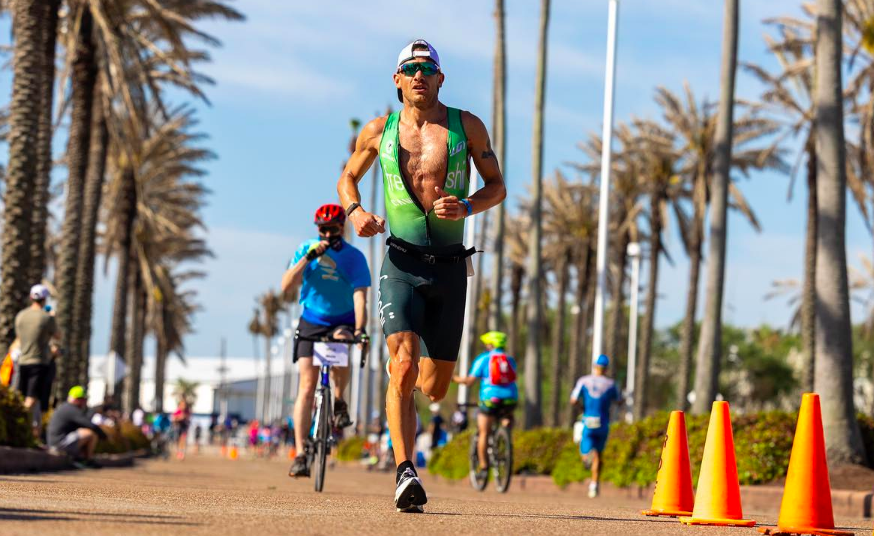 Lionel Sanders added another epic performance to a resume filled with them, taking a dramatic five-second win over Sam Long at the Ironman 70.3 North American Championship in St. George, Utah. As expected Daniela Ryf dominated the women’s race, blasting clear on the bike and holding off the rest of the women through the run to set a new course record.

Sanders guts it out

A large group of men stayed together through the swim, with Ben Kanute (USA) and Daniel Baekkegard (DEN) leading a group of 19 men through the 1.9 km course..

On the bike course American Rudy Von Berg pushed the pace early and was joined by Denmark’s Magnus Ditlev. Those two would ride away from the rest of the men, opening a 90-second gap by the halfway point of the ride.

After trailing by 1:51 after the swim, Sanders powered his way through the field to join a chase group of 14 that included George Goodwin (GBR), Sam Long (USA), Baekkegard, Jackson Laundry (CAN) who hit T2 2:43 behind Ditlev (the Dane had opened up a 30-second lead on Von Berg by the end of the ride).

Initially Sanders would blast out in front on the run, steadily gaining time on Ditlev, but he was joined by Baekkegard and Long as they worked their way to front. Eventually those three would join Ditlev at the front, setting up an interesting four-man road race.

Sanders would keep pressing the men, opening up a bit of a gap on the uphills, only to be caught by Baekkergard and Long on the downhills. Eventually we learned that Baekkegard was actually disqualified for not having stopped at a penalty tent after being assessed a penalty, and he would eventually disappear from the action. Ditlev was also dropped, which set up a footrace between Long and Sanders for the line.

You can find the men’s results here.

Haley Chura took the swim out like a rocket, opening up a 13-second gap on the chase pack through 1 km, and opened up even more time by the end of the 1.9 km swim. The American had a gap of 50 seconds on a group of five that included Fenella Langridge (GBR), Pamella Oliveira (BRA), Jeanni Metzler (RSA), Daniela Ryf (SUI) and Paula Findlay (CAN). The big surprise from the swim was Holly Lawrence, who appeared to get a bit boxed out at the start and would end up seventh out of the water, 1:37 down.

Once out on the bike, though the race quickly became the Daniela Ryf show. The Swiss star quickly blased to the front and, by the half-way point of the race was 3:25 ahead of Findlay, with Emma Pallant (GBR) the big mover of the race in third, 3:43 behind.

By the end of the bike Ryf’s lead was a whopping 6:07 on Pallant, with American Skye Moench  in third, 7:07 down. Metzler was fourth just a few seconds behind, while Findlay lost some ground on the long decent back into town to hit T2 in fifth, 7:22 behind. Lawrence continued to struggle, hitting the run course almost nine-minutes behind.

You can find full results here.