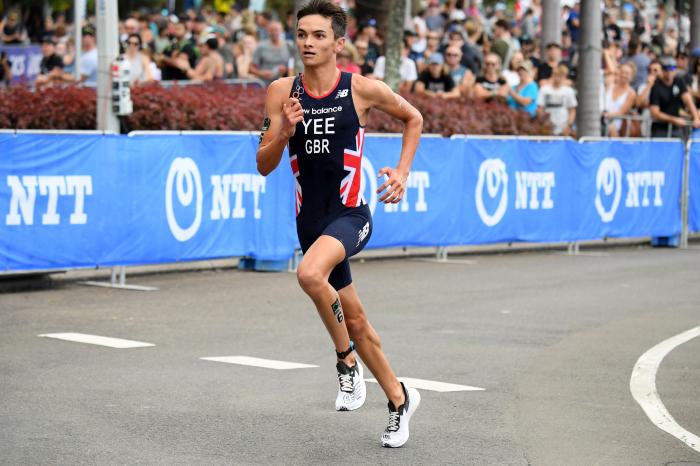 Great Britain’s Alex Yee thrilled the Leeds crowd today, running his way to a brilliant win and likely snaring his spot at the Tokyo Olympics thanks to an amazing run to not only take his first World Triathlon Championship Series (WTCS) race, but also likely nail his spot on the British team at the Olympics this summer.

Australia’s Aaron Royle led the way out of the water after Richard Varga (SVK), who had led through the first lap, went on the wrong side of a buoy. The Australian sprinted to T1 with Alistair Brownlee on his tail, with the two-time Olympic gold medalist blasting through transition to set up a breakaway group of eight early in the bike. Included in the group with Alistair Brownlee was his brother Jonathan, Morgan Pearson (USA), Royle, Leo Bergere (FRA), Jonas Schomburg (GER), Marten Van Riel (BEL) and Kenji Nener (JPN).

A few laps into the race, though, the chase group caught the eight leaders, creating a lead group of 25 that now included many of the race favorites, including Kristian Blummenfelt. Over the last few laps of the bike Great Britain’s Samuel Dickinson, competing in his first WTCS event, took a flyer, managing to stay ahead of the group heading into T2, but only by a few seconds.

Schomburg quickly charged to the front to start out the bike, but it wasn’t long before Yee and Hayden Wilde (NZL) went to the front and opened up some space on a group of seven that included Blummenfelt, Jonathan Brownlee and Pearson. Pearson would eventually lead that group up to the front, which seemed to prompt Yee to make another charge to the front heading into the second of four laps on the run.

Early on in the run it became very clear that Alistair Brownlee was still struggling with an injury – he quickly fell back and was never a factor. During the run we also learned that he had been disqualified for unsportsmanlike conduct during the swim.

By the end of that second lap Yee was 16 seconds up on Wilde, with Van Riel, Pearson, Spain’s Fernando Alarza and Antonio Serrat Seone and Blummenfelt about 30 seconds back.

There was no touching Yee, though, as he ran his way to a huge win and, very likely a spot on the British team in Tokyo. Pearson would take second, with Van Riel rounding out the podium. Alarza would take fourth, Wilde in fifth and Blummenfelt taking sixth.