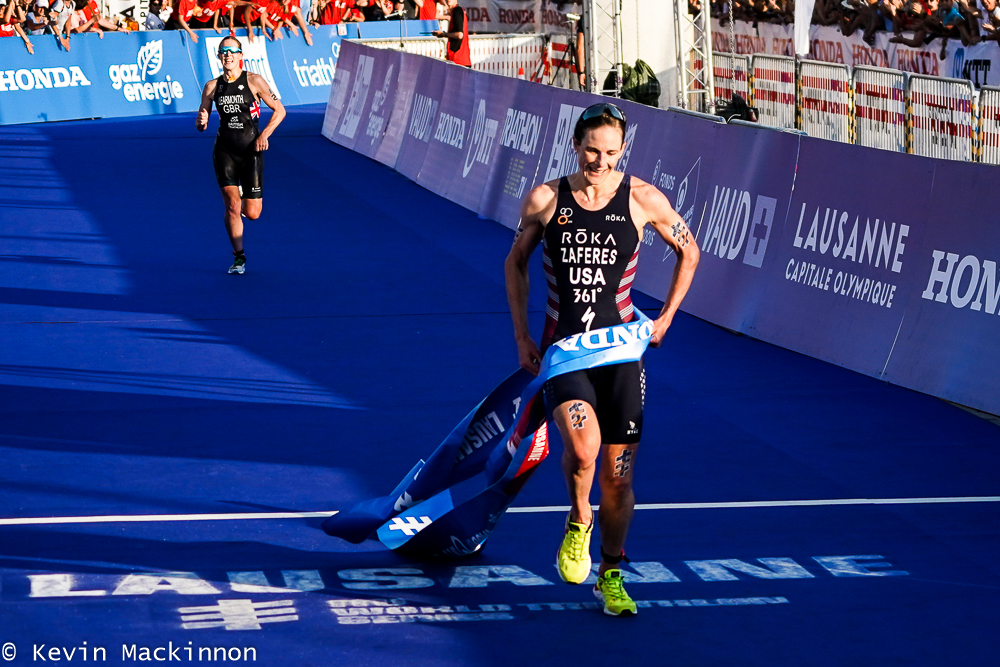 Rappaport was the first athlete to nail a qualifying spot for the Games thanks to a fifth-place finish at the Tokyo Test event in 2019. Knibb won the recent World Triathlon Championship Series (WTCS) Yokohama race, which also netted her an automatic qualification. The third women’s spot was “named via discretion by USA Triathlon’s Games Athlete Selection Committee.” That committee chose Zaferes as the third women’s team member. It was widely felt that the final choice was between Zaferes, who is top-ranked in the World Triathlon Olympic ranking and Taylor Spivey, third in the ranking.

Zaferes lost her father on April 8th of this year. After two weeks spent at the funeral and grieving with her family, Zaferes battled back to the start lines at Yokohama and at WTCS Leeds, but wasn’t racing at the same level we’re used to seeing from the 2019 world champion. Spivey finished ahead of Zaferes in both races, which led many to believe that she would get the nod for the Olympic selection.

On the weekend the American men’s team went from qualifying three athletes for Tokyo to two as Eli Hemming moved from 29th to 31st in the World Triathlon Olympic ranking. Pearson had earned an automatic spot thanks to his bronze-medal performance at WTCS Yokohama. That meant the second spot was to be decided between McDowell, Hemming, 2016 Olympian Ben Kanute and Matt McElroy. McElroy, at 20th in the rankings, was the highest of the three, but McDowell has a lot of experience for the US team in the Mixed Team Relay.

Here are some more details on each of the American qualifiers courtesy of USA Triathlon:

Taylor Knibb (Washington, D.C.)
Knibb, 23, is the youngest woman ever to qualify for the U.S. Olympic Triathlon Team. She has been the U.S. National Team’s youngest member since she first made the team in 2017. A triathlete since childhood, she grew up competing in USA Triathlon’s youth and junior elite circuit while running for her school’s cross-country and track teams (Sidwell Friends School in Washington, D.C.) and swimming with Nation’s Capital Swim Club. She went on to win the 2016 and 2017 Junior World Championships and the 2018 Under-23 World Championships — one of just three women ever to capture world titles at both the Junior and U23 levels. Knibb is a 2020 graduate of Cornell, where she ran NCAA track and cross-country for four years while balancing her elite triathlon career. She also joined the Cornell swim team her senior year. Today, Knibb trains in Boulder, Colorado, with Origin Performance Squad, an elite international training group coached by Ian O’Brien.

Summer Rappaport (Thornton, Colo.)
Rappaport, 29, was the first athlete to qualify for the U.S. Olympic Triathlon Team in 2019. She grew up in Colorado and attended Mountain Range High School in Westminster, achieving first team all-conference honors in both swimming and cross-country. She went on to compete in NCAA Division I swimming and cross-country at Villanova University. As a collegiate swimmer, Rappaport placed in the top eight of the Big East Championship in each of her four years. Throughout her cross-country career, she earned 2011-12 Academic honors, 2012 All-Mid-Atlantic Region, 2012 All-Big East, and placed fourth at the 2013 Big East Championships in the 5,000. After college, she was recruited to triathlon through the USA Triathlon Collegiate Recruitment Program and began competing as an elite in March 2014. She is a five-time World Triathlon Championship Series medalist and 13-time World Triathlon Cup medalist. Rappaport trains with The Triathlon Squad, an elite international training group coached by Paulo Sousa.

Katie Zaferes (Cary, N.C.)
2016 U.S. Olympian
Zaferes, 32, grew up in Hampstead, Maryland, and was a multi-time state champion in track & field at North Carroll High School. She went on to compete in track & field and cross-country for Syracuse University, specializing in the steeplechase and breaking multiple school records. She was later identified by USA Triathlon Collegiate Recruitment Program founder Barb Lindquist, who recognized her steeplechase background as a strong foundation for success in triathlon. Zaferes began competing at the elite level in 2013 and made her Olympic debut at the Rio 2016 Games, where she finished 18th. Zaferes has risen steadily through the international rankings throughout her career, placing fifth overall in the World Triathlon Championship Series in 2015, fourth in 2016, third in 2017, and second in 2018, before capturing her first career World Triathlon Championship title in 2019. She is the No. 1-ranked athlete in the World Triathlon Olympic Qualification Rankings heading into Tokyo. Zaferes lives in Cary, North Carolina, and is coached by Joel Filliol.

Kevin McDowell (Geneva, Ill.)
2015 U.S. Pan American Team Member, 2010 U.S. Youth Olympian
McDowell, 28, grew up participating in USA Triathlon’s youth and junior elite triathlon circuit as part of the Chicago-based Multisport Madness Triathlon Team. He was USA Triathlon’s Junior Athlete of the Year in 2009 and 2010 and represented Team USA at the 2010 Youth Olympic Games in Singapore, where he earned silver in the individual event and bronze in the Mixed Relay. He went on to win a bronze medal at the 2011 Junior World Championships. Later that year, he was diagnosed with Hodgkin’s Lymphoma, and took six months off to complete chemotherapy. A year later, he returned to elite competition, making his senior-level World Cup debut. He would go on to win gold at the 2014 FISU World University Triathlon Championships, and silver at the Pan American Games Toronto 2015. McDowell is now a seven-time World Triathlon Cup medalist and recently celebrated 10 years cancer-free. He currently lives and trains in Colorado Springs, Colorado, and is coached by Nate Wilson.

Morgan Pearson (Boulder, Colo.)
Pearson, 27, is originally from Spring Lake, New Jersey, where he grew up as a competitive swimmer, ocean lifeguard and promising high school runner. He went on to run cross-country and track & field at the University of Colorado at Boulder, where he was a seven-time All-American. He got his start in elite triathlon through USA Triathlon’s Collegiate Recruitment Program, which identifies top NCAA swimmers and runners who have the potential to excel as triathletes. After winning the overall title at the USA Triathlon Age Group Sprint National Championships in 2017, he debuted as an elite triathlete in 2018. He is experiencing a breakout 2021 season, winning bronze in Yokohama on May 15 and silver in Leeds, England, on June 6, to become the first U.S. male ever to earn multiple World Triathlon Championship Series medals. Pearson currently trains in Boulder and is coached by Dean Golich.