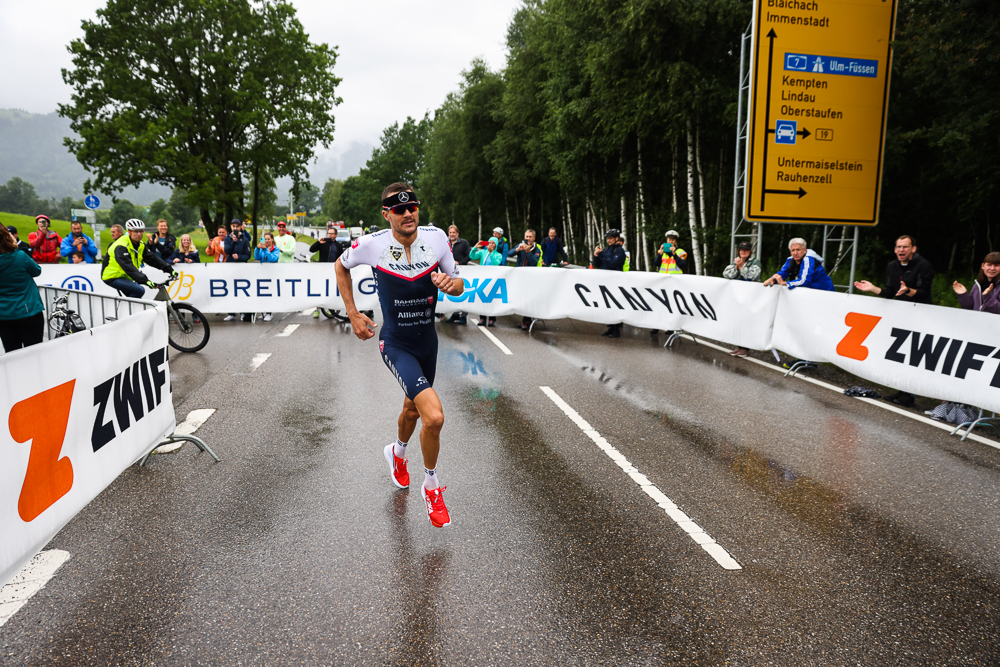 While he made it look easy through the first two legs of the race, the pain on his face over the last part of the run made it clear that breaking the 7:30 barrier for a full-distance triathlon is not easy. Despite riding through incredibly rainy conditions and a horrible fall on the run in which he appeared to hurt his hip, Jan Frodeno proved once again that he’s the fastest man ever over a 3.8 km swim, 180 km bike and a 42.2 km run.

Frodo dominates the swim and the bike

No one was surprised to see Frodeno quickly pull clear at the start of the race. The German was a bit slower than the split he swam in setting the previous world best in Roth, but was still a solid 45:58. Sanders had by far his best full-distance swim ever, finishing the first leg of the race in 50:58.

In the early stages of the bike Sanders would gain back some of the five-minute deficit, but it wasn’t long before Frodeno started to pull away from the Canadian, and would eventually finish the ride in a blazing 3:55:22, with Sanders riding another personal best (4:00:26), only to lose another five minutes to the German.

Once out on the run Frodeno quickly got into what looked to be a comfortable tempo, but as he rounded the corner at the end of the first lap, he slipped on the wet carpet and fell hard on his hip. Obviously in a lot of pain, Frodeno got back up and started to run again, quickly getting back to his stride. While he would would slow over the last half of the run, Frodeno hung tough to set the new record in an amazing 7:27:53.

Sanders managed to come pretty close to matching Frodeno’s run pace through the first 25 km of the run, but the wheels then fell off for the Canadian, who struggled to get to the finish line, but still finished in an impressive 7:43:32, which was a new personal best for him, too.