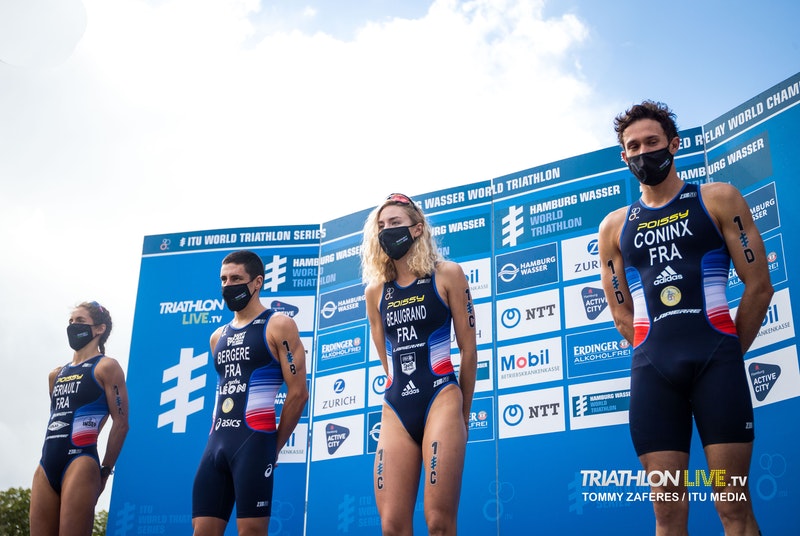 One of the most exciting events in triathlon racing makes its Olympic debut in Tokyo – the mixed team relay goes at 7:30 am local time, 00:30 CEST, 6:30 pm (Friday) EST. Like the individual triathlon events, the race takes place at the Odaiba Bay venue. Each of the four athletes (two men and two women) will complete a 300 m swim, two-lap 6.8 km bike and a two-lap 2 km run.

There are 17 teams that will be competing rather than the 18 teams that were expected – after Henri Schoeman pulled out due to a stress fracture South Africa won’t be able to compete. (That’s tough news for Richard Murray, who had decided not to race the individual to save himself for the relay.)

The top ranked team heading into the relay is France, who have won the last three world championship titles. Leonie Periault and Cassandre Beaugrand will no-doubt be joined by defending world champ Vincent Luis, with either Leo Bergere or Dorian Coninx rounding out the squad. While the French are the favorites, there are more than a few teams ready to ignore the stats sheets and push for gold.

One of those teams is Great Britain, who will likely lead off with Jess Learmonth, who is fresh off a silver-medal performance in the individual race, leading the women out of the water. The USA team can counter with either Summer Rappaport or Katie Zaferes, who were both quite close to Learmonth out of the water in the individual race, but Zaferes is more often seen in the third position. If Learmonth can get clear in the first leg it certainly would prove interesting since either Georgia Taylor-Brown or Vicky Holland could keep them in front, as could Jonathan Brownlee, who is likely to be the second athlete to go on the British team. That would save Yee, who is a strong runner, for the anchor leg. Australia is the second ranked team heading into the race, but they might struggle to find an opening-leg athlete who can swim with the likes of Learmonth to keep them in the mix.

While it would be easy to imagine that the medals will be decided among France, the USA, Great Britain and Australia, making that assumption likely isn’t a good plan. There are a raft of teams stacked with talented athletes who might not be able to stay with the sport’s biggest guns for a sprint- or Olympic-distance race, but ask them to suffer through 300 m/ 6.8 km/ 2 km and they’ll find the ability to stay with just about anyone.

Included in that list are New Zealand, who will likely have Hayden Wilde completing the anchor leg fresh off his bronze medal performance in the individual. The word is Jelle Geens is back for Belgium, which makes them a formidiable threat, too. Germany was serious enough about the mixed team relay that one of their selections was a super-sprint race, while the Netherlands chose not to have their men race the individual event since they hadn’t met the national criteria, so they’ll be rested and ready to go in the relay. Considering they’ve got Rachel Klamer (fourth in the individual) and Maya Kingma, another great swimmer who won WTCS Leeds earlier this year and finished 11th in the individual, the Dutch team could be competitive, too. After pulling the women’s chase group around the course then managing to hang on to sixth in the individual race, you know that Switzerland’s Nicola Spirig is ready to lead her team to a top finish, too.

In terms of other countries competing, it’s hard to imagine how triathlon powerhouse Spain might not be in the medal hunt, but they haven’t been as competitive in the relay at the big meets as they have as individuals. The other teams in the race include Canada, Italy, Japan, Hungary, the ROC (Russional Olympic Committee), and Mexico.

If a huge pack manages to stay together any country in this field could be in the medal hunt, but with the technical difficulty of the course and sheer fire power of the first GB swimmer (Learmonth), it is more likely we’ll see a smaller group out in front setting things up for a dramatic final sprint to the line. If Australia can be in touch at all starting the run, Birtwhistle will be a man to watch as he is renowned to have a great kick. That won’t help, though, if the French are able to hand off to Luis with any sort of a lead, which is what we’ve seen at the last few world championship events.

This will be the biggest stage ever for the mixed team relay, though, so there will be lots of pressure on the French, and a lot of motivation for other countries to mix things up with the three-time consecutive world champs. Be prepared for some exciting racing.