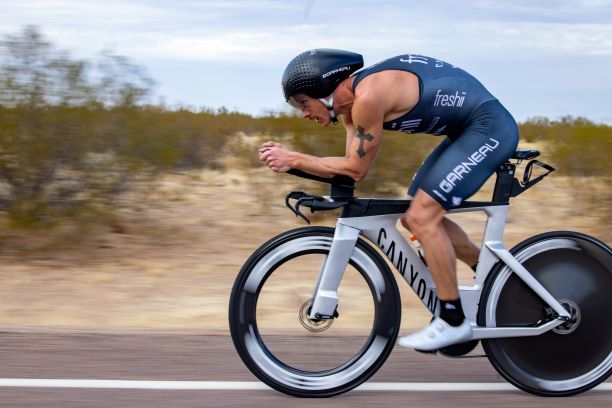 There was certainly no shortage of interesting quotes from today’s press conference ahead of Sunday’s Zwift Tri Battle Royale, where Jan Frodeno and Lionel Sanders will compete in a head-to-head race over the full-distance. Today we learned that one of the main goals of the event was to try and break Frodeno’s 7:35:39 record time from Challenge Roth in 2016. Realizing that Frodeno would be thinking of going that fast, Sanders said that he’s been thinking about 7:29:30 as the time he’ll need to go to be in the race with Frodeno on Sunday.

“I am pretty sure he (Frodeno) was thinking ‘I’m going to break 7:30,’ so I needed to start thinking 7:29:30,” Sanders said. To keep himself motivated he put a poster on the wall of his training area with the time on it.

“It would be awesome if we both broke the record,” Frodeno said, “And I can be the first to do it.”

Sanders has also been impressed by the “attention to detail” he’s seen from race ogranizers, who have even organized banking at the turnarounds to ensure the athletes can maintain their speed throughout the course. He also can’t believe just how fast the roads are – in the rain on Wednesday he was able to hit 44 km/h while pushing 303 watts. “It’s better pavement than I’ve experienced anywhere,” he said.

While speaking at today’s press conference the two athletes were also taking part in a Zwift ride, which proved to be challenging since the event took place at the top of a ski resort at 2,000 m altitude.

Today we also learned that Frodeno came up with the idea for the event as a follow up to his “stay at home” full-distance triathlon last year. That event was geared to participation, while this event is focussed on performance, he said. He worked with Hannes Blaschke (the founder of Hannes Hawaii Tours), who is putting together the event. Once the speedy course was organized, they then decided to invite Sanders.

“Why not bring the guy who is best in the world and well suited to this format,” Frodeno said while riding his bike facing Sanders. “It’s a time trial. A lot of people can perform in a pack, but we all know Lionel from his die-hardness. That is what I appreciate and that’s why I am glad he accepted.”

While Frodeno is, on paper, the prohibitive favorite, he was frank about how seriously he’s taking the race.

“People forget that I’ve been around so long that I have still lost more races than I’ve won in my career,” Frodeno said. “I’ve lost that many tiimes that I know how much I hate it and how much it defines me as a person and how hard I am on myself, and that’s all I have. I don’t know how many races I’ve got left, but I’m treating every one like it’s my last one, so I have to apply myself fully.”

Sanders also said that he would rather compete in the event this Sunday than Kona.

“I don’t have a Kona slot,” he said. “I had to say, ‘which would you rather do, Kona or this?’ Fron an experiential standpoint, I would rather do this than Kona, just because Jan has had such a positive impact on my career.”

The Zwift Tri Battle Royale starts at 9 AM CEST, 3 AM EST and will be streamed live. You can find out more information here.