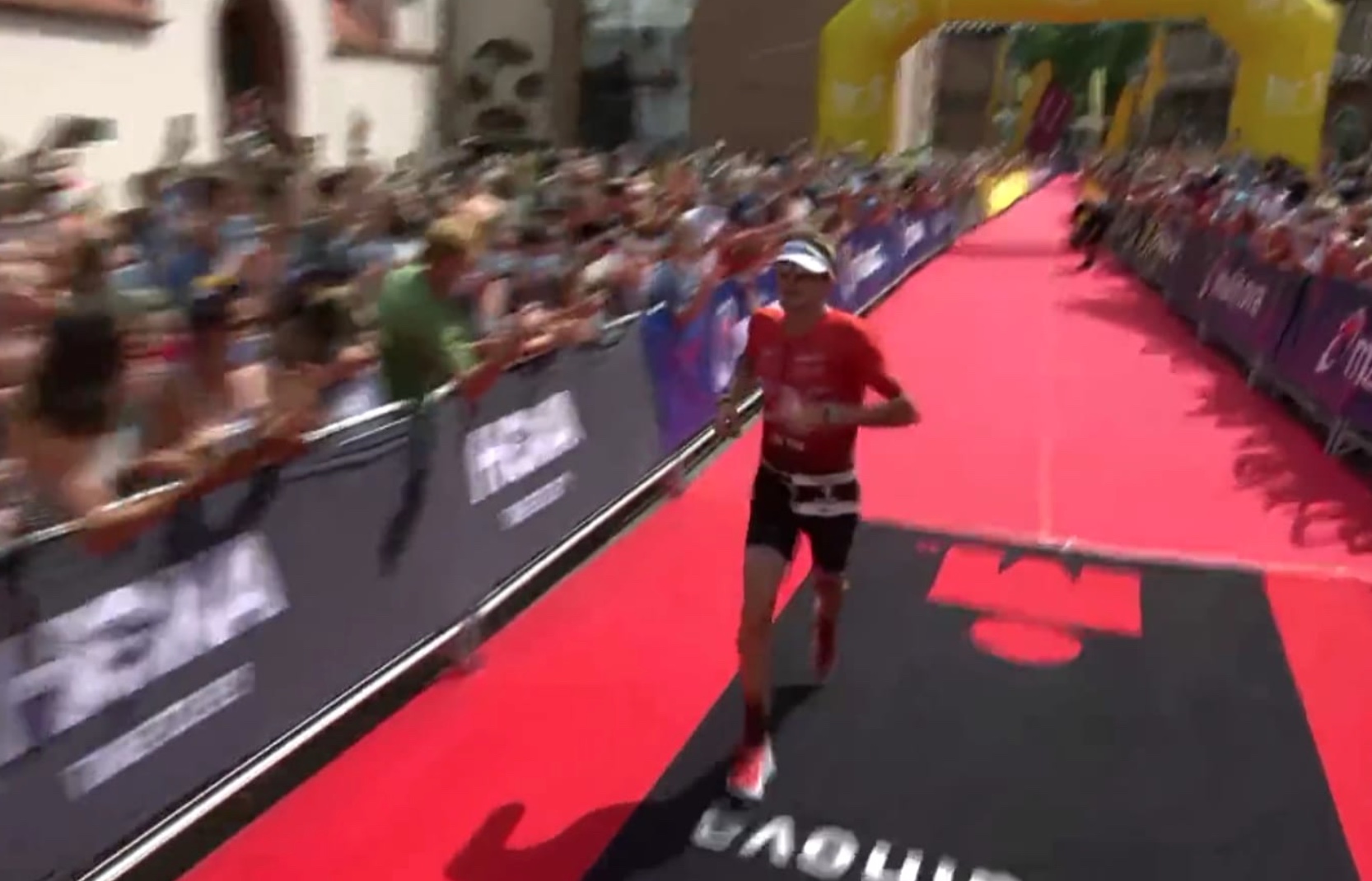 A stellar run by Sweden’s Patrik Nilsson was just rewarded with the win of the Ironman European Championship in Frankfurt (7:59:21). With eight men hunting down Denmark’s Kristian Hogenhaug on the marathon, Ironman Frankfurt turned into an exciting race up until the last kilometers of the run, when the podium positions still changed. After 7:39 hours of racing, most of the time being in the lead, Hogenhaug had to accept that Nilsson was going to take the win. That meant Hogenhaug settled for silver (+0:56) and Schotland’s David McNamee completed the podium (+3:07).

That it’s important to make the cut during the swim we know from short distance racing, but that it can also make the difference for the longer distances, was proven again today. Nearly the entire top ten was already alongside each other in the water and with Nilsson being the fastest swimmer (49:35 minutes) there were no big gaps created. Maurice Clavel (GER), Paul Schuster (GER), Casper Stornes (NOR), Dylan Magnien (FRA), Robert Wilkowiecki (POL), Pieter Heemeryck (BEL) and Franz Loeschke (GER) followed in this same order right in his stream. Just outside the top ten McNamee and Hogenhaug reached their bike in 11th and 12th place, but only 25 seconds down to Nilsson, and thus they were still close to the front.

Big pack on the bike

It was no surprise to see a big front pack take shape on the bike. The only athlete that didn’t feel like biking in the group was Heemeryck. The athlete has had quite some disappointing races this year and had until this point never put together a strong performance on the full distance, but still he took the risk. After 90 km Heemeryck had a lead of four minutes to his chasers, a pack with Clavel, Hogenhaug, Nilsson, Loeschke, Canada’s Brent McMahon, Stornes, Schuster and McNamee. This group was well aware of Heemeryck’s escape and therefor they worked hard, each taking turns, to try and get the Belgian back in sight.

Hogenhaug attacks on the bike

After approximately 100 km, Heemeryck’s lead started to shrink. That was mainly because of Hogenhaug, who really hit the gas. That was a bit too much for the rest of the group, which made them decide to let go of Denmark’s super cyclist. Within 40 km, Heemeryck’s gap had completely disappeared as Hogenhaug took the lead. Heemeryck decided to sit back in the group, and that’s where he stayed until reaching T2. Hogenhaug really went for it and therefor he enjoyed over eight minutes of an advantage when going out for the run.

With a pack of eight entering transition simultaneously, some athletes felt the pressure to go for a quick transition. Others didn’t let that pressure get to them and took it easy, of which Loeschke is an example. He even took the time to get out a foam roller and stretch his back.

Stornes and Nilsson didn’t wait to slowly hunt down Hogenhaug, but instead they ran off with a crazy 3:20 min/km pace. Heemeryck tried to stay with this little group, but given this extreme speed, he didn’t manage. After approximately ten km the Belgian decided to let go of the three Scandinavians in front. McNamee didn’t let these fast paces get to him, and seemed to trust on his own race plan. That saw the Scott slowly but steadily approach Heemeryck. It didn’t take too long before McNamee passed Heemeryck and soon after that Clavel followed too. While there was a lot of shifting in positions in the front, even in the back McMahon, Loeschke and Schuster – running on place seven and eight at this point – were still in the mix. Meanwhile, the runners that were just outside the top ten already had a gap of 22 minutes to the first man at the 10k mark.

Until 25 km it was still Hogenhaug in the lead – at this point left with a 2:55-minute advantage – Nilsson was in second place and McNamee just behind him in third. In the next kilometer that changed with McNamee joining Nilsson. In the meanwhile, Heemeryck found some new energy, as he was moving forward again, running to fourth place, while both Stornes and Clavel dropped back.

With seven km to go until the finish, Nilsson made a move, trying to drop McNamee. Hogenhaug still enjoyed a lead of 1:20 minute and while the two chasers were doing a good job hunting down Hogenhaug, it seemed like the Danish athlete started to run stronger again. He didn’t maintain that speed for very long though, because with the finish nearly in sight, he saw Nilsson pass by and take the title, clocking a 2:39:40 hour marathon. Hogenhaug took home the silver medal and McNamee crossed the line in third. Heemeryck made it to fourth place.