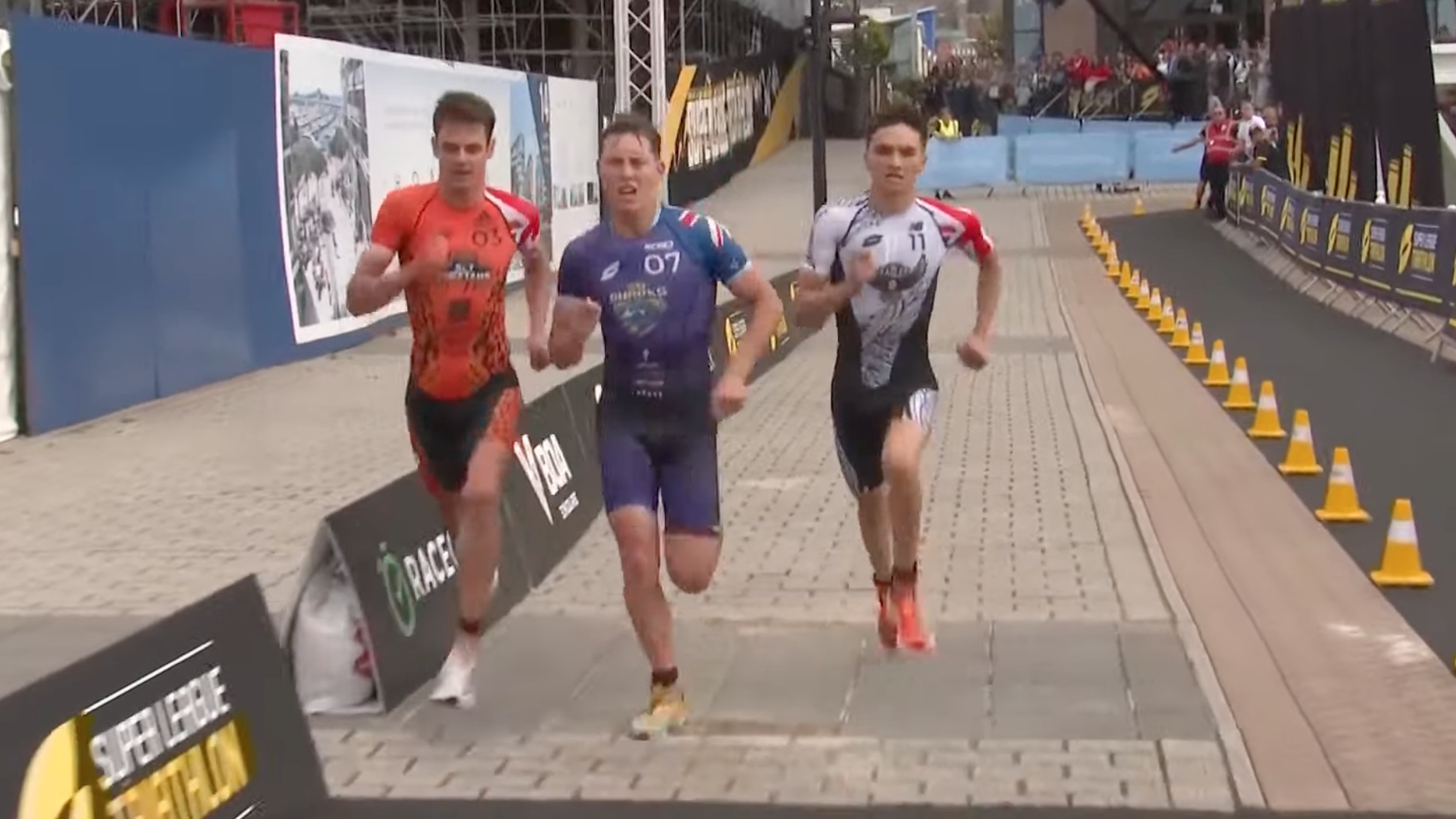 What a run by Britain’s Alex Yee. Only in the final meters he sprinted to the front, to end up taking the win at Super League Triathlon Jersey. He shared the podium with Britain’s Jonathan Brownlee, who took second only a second later, and Australia’s Hayden Wilde, who was going for the gold for most of the run, but lost it in the final stretch.

Athletes had to continuously complete three short triathlons of 300 meters of swimming, 4 km of cycling and 1600 meters of running. Athletes that were more than 90 seconds behind, were taken out of the race. The fastest athlete after the first swim, who would also be the first to bike out of T1, earned a short-chute for the run.

Leg one: group of seven athletes in front

In the water it was Luis who took the lead, followed by Matt Hauser, who was right at his feet. As Luis was also first out of T1, the Frenchman earned a short-chute to use later on the run. Once on the bike, I front group was created with four athletes: Luis, Matthew Hauser (AUS), Marten van Riel (BEL) and Kenji Nener (JPN). After the first lap, four more athletes joined this group, meaning a group of six with Van Riel, Luis, Seth Rider (USA), Hayden Wilde (AUS), Brownlee and Vasco Vilaca (POR) was leading. Hauser gave his all to try and hang on to these fast men, but he didn’t manage and dropped back. Going into T2, Rider lost control over his bike, which saw Wilde fall. Vilaca had a quicker transition, as he took the short-chute, meaning he was first in and first out. On the run, initially it was Brownlee who attacked. He led most of the discipline, but the other men followed right behind him. While Rider lost touch with this group, fast runner Alex Yee (GBR) bridged the gap and joined the front.

After the run, Wilde was first to get back into the water. Van Riel, Brownlee, Luis, Yee, Nener and Vilaca followed in this same order from place two to seven respectively. Luis swam back to first place, Brownlee enjoyed his slipstream and Wilde hang in around a third place. When reaching the transition area to grab their bikes, the first seven athletes were still mostly together. Only Rider seemed to have lost touch in the water. In the saddle, athletes started to work hard, creating a long line of men following each other and trying to stay as close to the front as possible. Wilde, Brownlee, Luis, Van Riel and Nener enjoyed each other’s company after the first half of the bike part, while Yee, Vilaca and Rider gave it their all to try and reach them from a few seconds behind them. Towards the end of the bike part, they had managed, which meant all eight men conquered the run simultaneously. On the run, Wilde put the hammer down, while Bronwlee tried and keep up with him. Surprisingly, Luis disappeared from the front when running.

Thanks to a strong run, Wilde was first to get into the water. He was followed by Brownlee, who later caught up with him. Because of a tough run in leg two, the big front group had broken apart by now, but during the swim most of these athletes got back together. Luis got close, but he still had to work hard on the bike to try and reach the group. On the bike it were Van Riel, Wilde, Nener, Brownlee and Yee who formed a first group. Luis was just a handful of seconds behind them. Vilaca and Rider were dropped at this point. None of the three athletes managed to return to the front, which meant five athletes were left for the final run. Wilde was on fire again. Once he had his running shoes back on, he took off. When the finish line came into sight, Yee and Brownlee got into sight too. The race ended up being just a hundred meters too short for Wilde, who was passed by Brownlee and Yee. In an exciting sprint finish, it was Yee who broke the tape. Brownlee finished second and Wilde third.