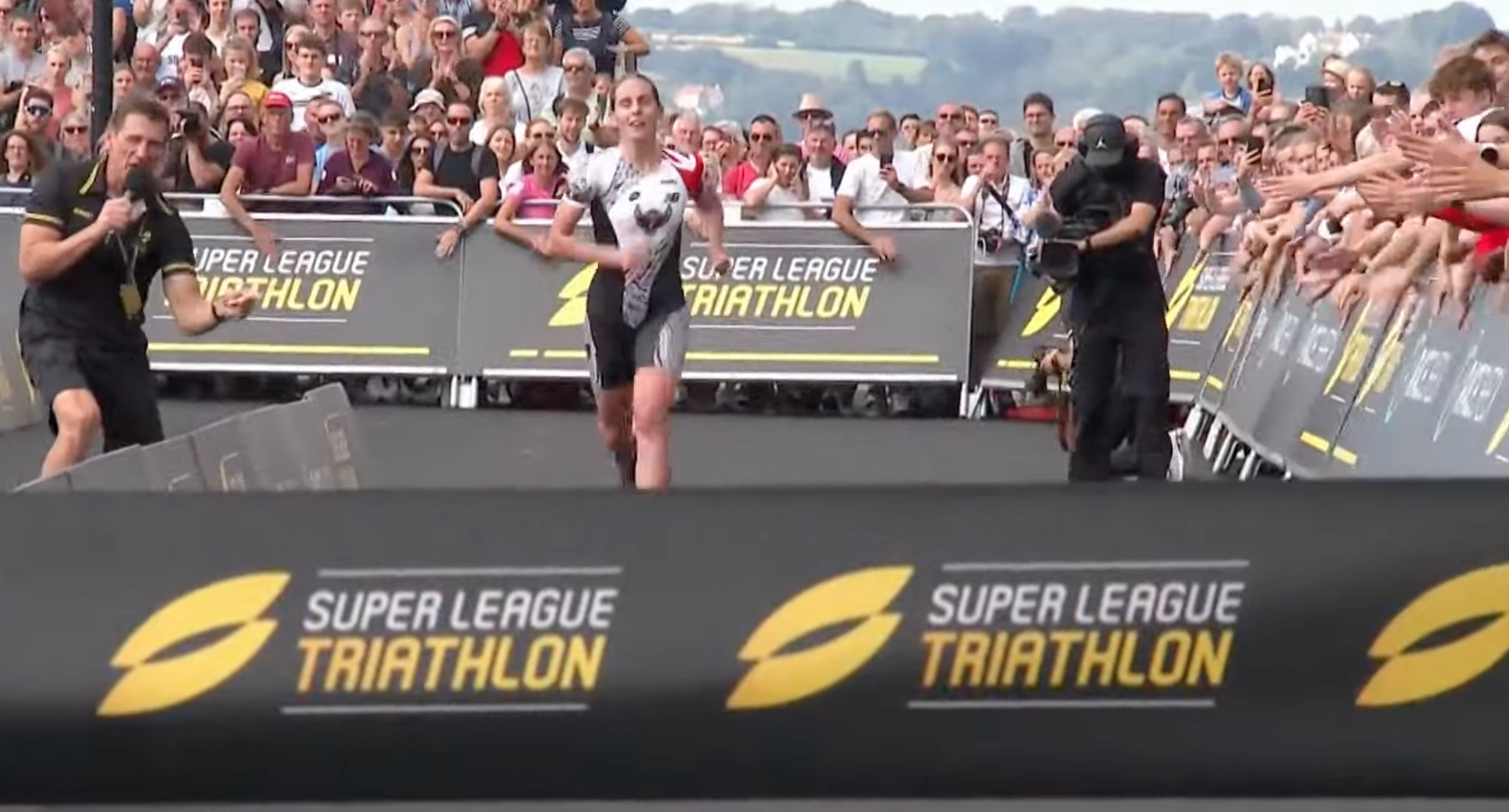 Note: while Georgia Taylor-Brown was disqualified right after the race, an hour after the race, Super League Triathlon reversed that decision, as the mistake did not have an effect on the final standings. That means, after all, Taylor-Brown won silver in today’s event. Meaning France’s Cassandre Beagrand ended up in third place and Britain’s Vicky Holland took fourth.

Nobody got in between Britain’s Jessica Learmonth’s winning streak. She took a strong win today during Super League Triathlon Jersey. After Learmonth won the first two races of the Super League Triathlon Championship – London and Munich – this is her third win in a month time. Behind her, surprisingly, France’s Beaugrand took third, as Georgia Taylor-Brown – who had been leading together with Learmonth the entire race – was disqualified at the last moment for taking a short-chute, which she wasn’t allowed to take. Britain’s Vicky Holland took the last podium spot.

Athletes had to continuously complete three short triathlons of 300 meters of swimming, 4 km of cycling and 1600 meters of running. Athletes that were more than 90 seconds behind, were taken out of the race. The fastest athlete after the first swim, who would also be the first to bike out of T1, earned a short-chute for the run.

First leg: Learmonth and Taylor-Brown find each other

The race – that was generally hard to follow due to the many teams, such as ‘The Sharks’ or ‘The Rhinos’, the amount of short-chutes that could be earned, and the extremely technical bike course that saw athletes barely get into speed – was once again dominated by the Britts. It came as no surprise to see Britain’s Learmonth first out of the water after the first swim. She enjoyed a nice few seconds of an advantage to her fastest chasers: Vittoria Lopes (BRA), Taylor-Brown, Maya Kingma (NLD), Holland, Beaugrand and Sophie Coldwell (GBR). With 4 km to go on the bike, it seemed like Learmonth didn’t consider riding on her own the entire time. While six athletes created a chasing group, Taylor-Brown caught Learmonth’s wheel. Simultaneously, the two British athletes racked their bikes back in T2, to grab their shoes and go out on the run. On the run, Taylor-Brown moved up to the front, leaving Learmonth behind.

Second leg: Learmonth attacks again in the water, Taylor-Brown on the run

Five seconds behind Taylor-Brown, Learmonth dove back into the water. It didn’t take long before she had passed her competitor, though. Holland, Periault, Kingma and Coldwell started the second leg respectively from a third to sixth place. Kingma, Holland and Stanford exited the water 26 seconds behind Learmonth. On the bike, Learmonth and Taylor-Brown found each other again. Again, these two athletes went onto the run together. Taylor-Brown showed to still possess the strongest legs, dropping Learmonth a few seconds back before the third leg kicked off.

Just like in the first and second leg, Learmonth was first out of the water, with Taylor-Brown right behind her. While, Learmonth swam back to the lead in the water, the two jumped onto the bike alongside each other. Due to a crash when mounting, Taylor-Brown saw Learmonth take off and had to go full gas to try and get her opponent back in sight. She didn’t manage, though. It was Learmonth who started the run in first place. With a short-chute waiting for her, there was nothing getting in between Learmonth and the win anymore. In the meanwhile, Taylor-Brown saw her second place be taken away from her, as she got disqualified for taking a short-chute, which she wasn’t allowed to take. Given the complexity of the SLT rules, it wasn’t much of a surprise to see an athlete misunderstand the rules. It meant Beaugrand took second and Holland took the third, even though Taylor-Brown had been in front together with Learmonth during the entire race.