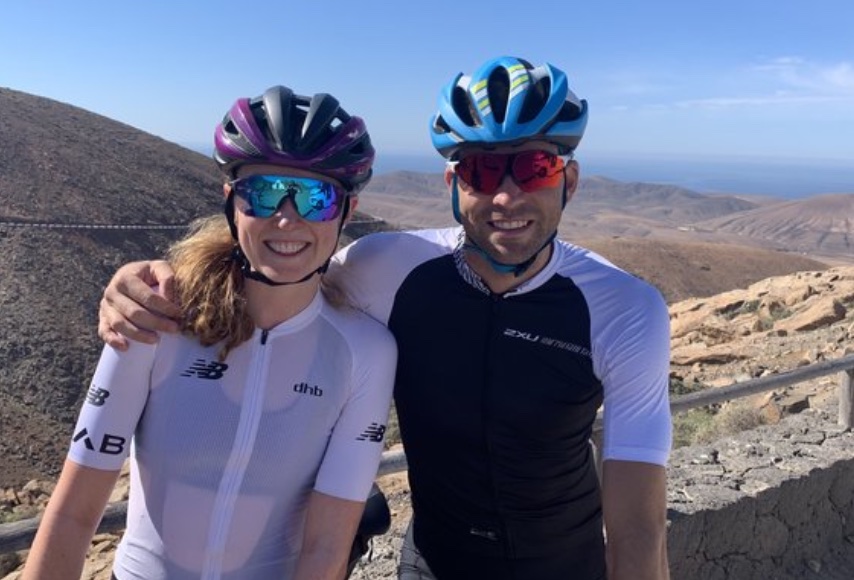 The inaugural Couples Championship left many fans extremely frustrated as the event coverage didn’t feature any timing splits and sporadic shots of the action, but the event did manage to provide some exciting racing to go along with the $100,000 prize purse for the winning team. (Second place earned $20,000, with $10,000 going to the third-place couple, and each couple also received a $10,000 appearance fee.)

Keeping track of what was going on was a challenge, especially considering the swim leg was apparently 600 yards as opposed to the 400 m previously advertised. Out of the water a group of three men managed to break clear of the group including short-course specialists Aaron Royle and Matt Sharpe, who were joined by Eric Lagerstrom, who had to swim up to the front after missing the swim start.

Out on the bike Royle quickly pulled clear of the rest of the men and managed to stay clear through the 16 km ride, hitting the run in first with Sharpe about 45 seconds behind, with Lagerstrom and Tim O’Donnell hitting the run shortly afterwards.

Royle hung on through the run to hand off to Non Stanford in first, a few seconds up on Sharpe as he tagged off with his partner Kirsten Kasper. France’s Clement Mignon had a fantastic run to move to third, handing off to his partner Marjoleine Pierre.

Stanford was able to hold on through the swim, but Kasper was able to gain a bit of time during the swim. Those two would hit the bike course with a gap to the women chasing behind who were, in order, Pierre, Findlay and Samantha Kingsford.

On the bike Kasper would stay close before making a move to the front over the final few kilometers to lead the women into T2. The American hit the run course with a 10-second lead on Stanford, with Findlay riding her way up to third to start the run 45 seconds behind with Pierre starting the run in fourth, 1:20 down.

Out on the 5 km run course Stanford would run her way to the front and pull clear of Kasper to take the win and the $100,000 check by about 15 seconds. Pierre managed to catch up to Findlay to take the final spot on the podium and the $10,000 for the third-place team. Jeanni and Justin Metzler took fifth. The first of three teams who sent a women off first, Seth Rider and Roksana Slupek, managed to move up to sixth.

Here’s the results board posted on the coverage: