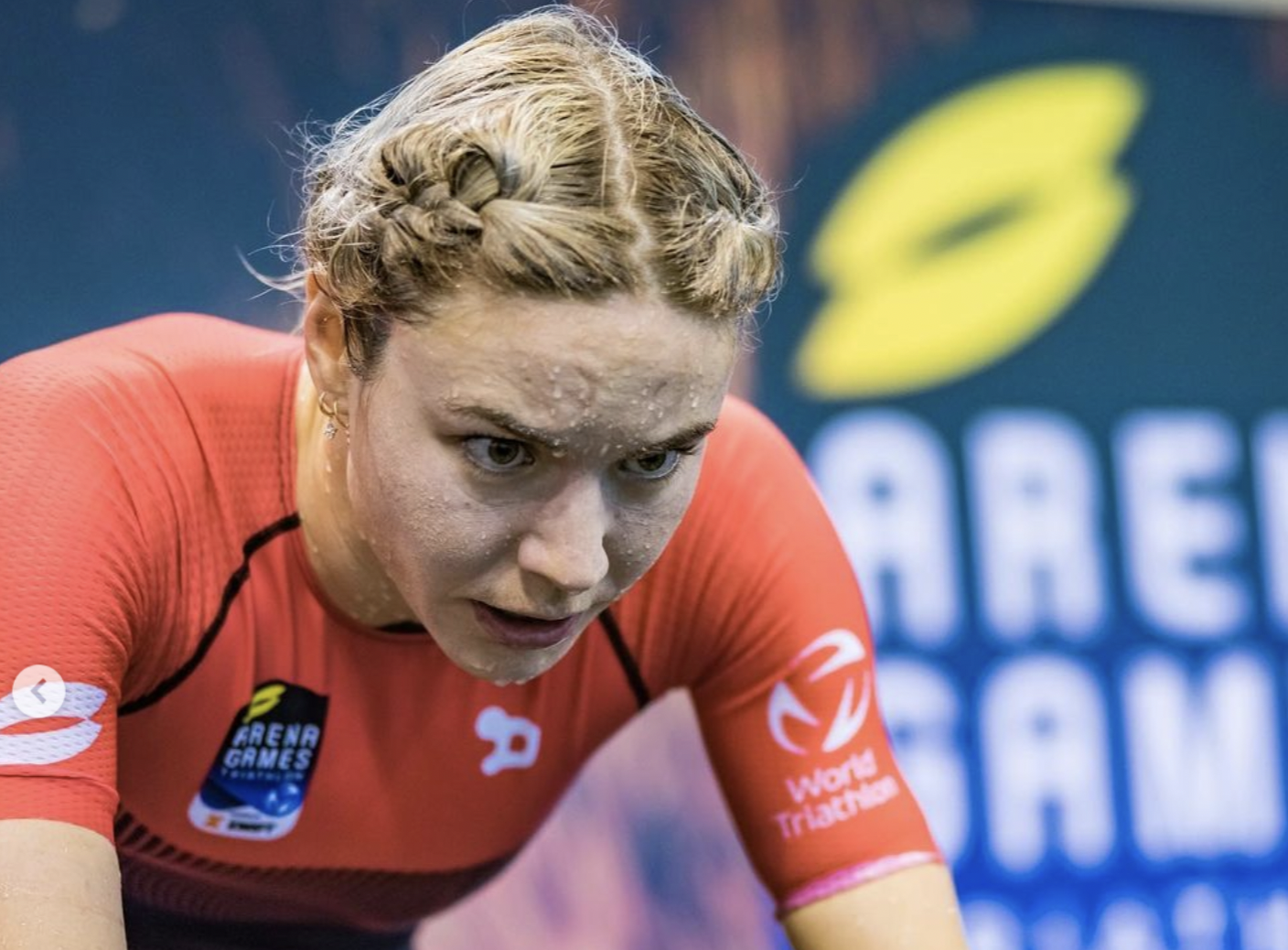 She dominated each of the three heats and therefor ended up taking the victory at the Super League Triathlon Arena Games in London: we’re talking about France’s Cassandre Beaugrand. While it was Britain’s Beth Potter who earned gold earlier this month during the SLT Arena Games in Munich, she now settled for silver. Third place went to Britain’s Jessica Learmonth.

Athletes got a chance to qualify for tonight’s finals through two heats that took place in the morning. For the finals, they had to complete another three short triathlons. The first heat consisted of 200 meters of swimming in the pool, 4 km of cycling in Zwift and 1000 meters of running on a self-powered treadmill. The second heat started with a run, then a bike part and finally, a swim. For the final stage, athletes started in the order of their accumulated finish times of the first two heats. That final heat consisted of another swim-bike-run over the same distances.

It was Beaugrand who was first to jump onto her bike, as she swam 2:12 minutes over 200 meters. She was soon followed by Learmonth, Hungary’s Zsanett Bragmayer and Potter. On the bike, Potter and Learmonth joined Beaugrand in front, while Bragmayer lost touch. From a fourth place, Britain’s Georgia Taylor-Brown gave it her all to try to reach the front, but given the draft advantage the little group enjoyed, she didn’t manage. However, the three first women didn’t take it easy either. With Potter being a strong runner, Learmonth decided to push the pace on the bike and take off on her own.

Learmonth may have enjoyed a three-second buffer to Learmonth when going onto the run, she lost that advantage in transition. That means Potter was still the first lady to jump onto the self-powered treadmill. While all eyes were on Potter for that final discipline, it turned out that Beaugrand got the hang of this machine too. In 500 meters, Beaugrand had run to the front and caught up with Potter. Beaugrand ended up winning stage 1, three seconds in front of Potter, who took second. Learmonth finished in third (+0:15).

After just running an impressive 1000 meters in stage 1, Beaugrand continued her attack by sprinting straight back to the front in stage 2. The French athlete was out of sight within a few hundred meters. Potter, Taylor-Brown and Learmonth followed in second to fourth position. Given her – again – solid run, Beaugrand entered up in first place during the bike part too. With a 10+ second deficit, Potter and Taylor-Brown worked hard to try and shrink the gap, but Beaugrand was too far out of sight. In the water she maintained her lead, and thus it was Beaugrand who took the win again, followed by Potter (+0:17) and Learmonth (+0:19).

With a nineteen-second advantage, Beaugrand dove into the water in first place, followed by Potter and then Learmonth. Given the big time differences between the first ladies, there wasn’t much excitement in that final stage. The podium places were already pretty much decided on, and all athletes maintained their position. That means it was Beaugrand who won the overall SLT Arena Games in London, while Potter claimed second and Learmonth finished third.