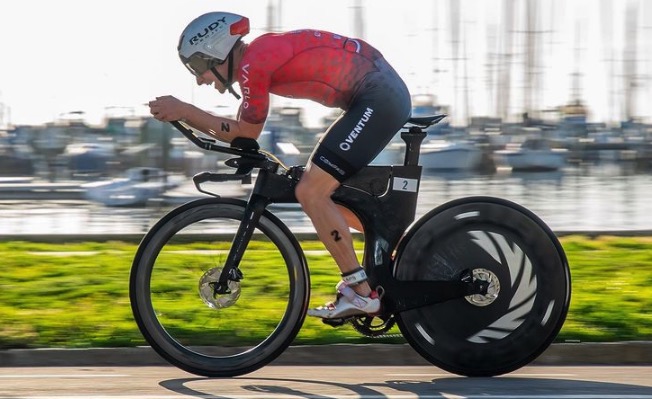 With two American winners – and in the men’s race even an all-American podium – American athletes did a good job at Ironman 70.3 Chattanooga. In both the men’s and women’s races, it was an exciting battle that was ultimately won by Jason West and Jackie Hering.

Jason West was already in the front during the swim; he only lost 19 seconds to Ben Kanute, who swam fastest (24:17 over 2.25 kilometers), and came out of the water together with Eric Lagerstrom, Brennen Smith and Luis Ortiz. Right behind them there was a group with some big names, including Tim O’Donnell, Rudy von Berg and Steve McKenna.

On the bike, then, many men came together, all together in pursuit of Kanute. His lead did not increase, but it still took some time for Kanute to be caught. In the end, few exciting things happened during the bike and a front group of ten men, which included West, came back in T2.

This logically led to an exciting half marathon, but it was West who took the lead almost immediately and did not relinquish it. Andre Lopes and Matt Hanson were in a close race for a long time and battled for the silver and bronze a minute behind West. When West crossed the finish line and won the race in 3:37:15, it was only 56 seconds before Hanson claimed second place. Lopes slumped mercilessly in the closing stages and in the end it was Von Berg, 2:37 minutes behind the winner, who took the bronze.

In the women’s race, the eventual winner, Hering, started the race a little less energetically. When she came out of the water after 26:41, Holly Lawrence was already 1:17 minute out and Grace Alexander, Megan Foley and Paula Findlay were also ahead of her. On the bike, however, things were soon put in order and Findlay and Hering rode away from the other ladies and closed the gap to leader Lawrence, and thus formed a front group of three.

The leading group stayed together for a long time, until the last few kilometers, when the bike pace appeared a bit too high for Lawrence. Once back in T2, the British athlete had lost a minute on Findlay and Hering. During the first few kilometers of the run, Findlay also began to lose time and Hering therefore was already laying the groundwork for her victory.

During the run nothing changed anymore in the battle for podium and when Hering claimed victory after 4:02:35, she had built a comfortable lead over Findlay, who finished after 4:06:16. Lawrence claimed third place in 4:09:23.