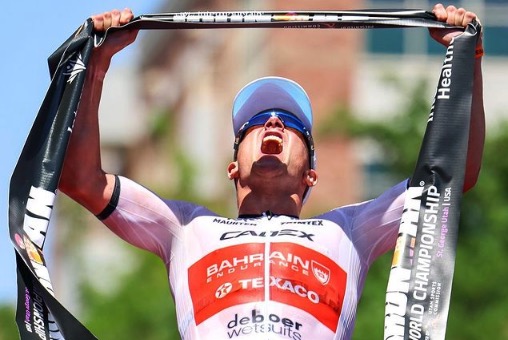 “Something that I have struggled with since I started out in triathlon, has been my weight. It’s not necessarily that I’m fat, or thought that I was fat, that’s not the case…. I just carry quite a bit of muscle. I thought, stereotypically, if you look at triathletes, they are so thin, absolutely miniature. And I was like: that’s just not me. I thought I had to really reduce my muscle mass and get down to a really low weight in order to be able to complete. And Kristian Blummenfelt has just gone, blown that out of the water.”

In a video on his YouTube channel, triathlete Josh Lewis talks about weight, body fat and muscle. While there was always the belief that heavier athletes would struggle in triathlon due to the weight they have to carry – during the run or when cycling uphill – Kristian Blummenfelt has shown us in the past few years that you don’t need to be extremely lightweight to be a world-class triathlete. Winning Olympic gold and winning the Ironman World Championship has probably been enough proof.

“Trust me I’ve met him, he’s not big in any way, shape, or form; I’m not suggesting that. There’s been so much on social media and even on the Ironman Now channel, on the chat feed, about his weight and how big he is… Saying that he was too big to do triathlon. That is lunatic, because he has just gone and won the Olympics, and he just won the Ironman World Championship”, Lewis adds some nuance.

“That’s a lot of affirmation for me, though, in terms of: you don’t have to be tiny to be able to do triathlon well. Granted: he’s got an obscene Vo2-max – in the 90s – and I don’t… So, there’s that to consider. And he’s got loads of other massive benefits to his program and the way he trains. He’s been doing this scientific program for the past couple of years, even a decade.” Still, he concludes: “Blummenfelt is just showing to all triathletes that you don’t have to be really small, or low body fat, or lack muscle, to be good at triathlon; or running, or cycling, or swimming. It’s just a healthy reminder.”

“Why are you looking for marginal gains when I’m sure there are massive gains to be made elsewhere?”, Lewis questions his own approach. […] I don’t need to be looking for those small percentages in body fat or lack of muscle. I tried to go lack of muscle in the past. I tried to basically starve myself – controlled and under guidance – but I tried to lose that muscle mass; to get down to a low body weight, but I just have a big frame. I have high muscle mass density, so I can’t reduce it too much. My body just won’t function properly when I go down to that low body fat percentage. It’s not worthwhile for me to be doing that.”