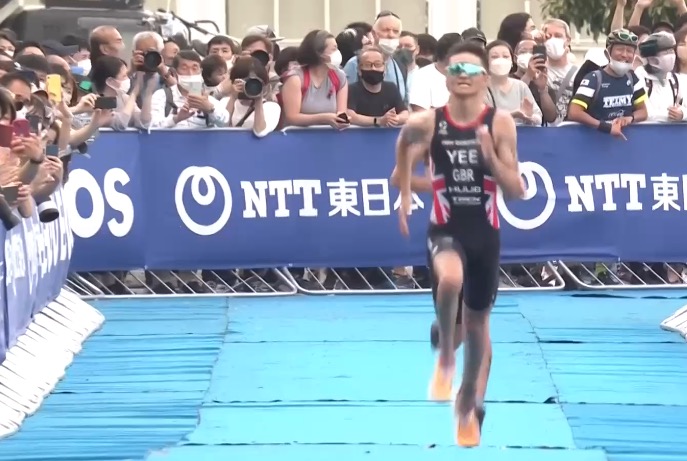 After a particularly exciting denouement, Briton Alex Yee has just won WTCS Yokohama. It was New Zealander Hayden Wilde who led the ten-kilometer run almost the entire time, while Yee followed in his tracks, but in the last 2.5 kilometers some psychological games were played and after a final sprint it was Yee who won. Wilde came second and Frenchman Leo Bergere third.

The swim didn’t start all out – after the first lap of 750 meters in the particularly calm water in Yokohama, Vincent Luis was the first to return to dry land after 9:01 minutes – but the pace was significantly increased in the second lap. Luis remained in the lead because after 1500 meters he was also the first to return; after 18:12 minutes he ran towards T2 together with his compatriot Dorian Coninx. The two French athletes then had a six second gap on the rest of the field, but that lead was lost during transition and so a huge leading group emerged during the start of the bike, which included about thirty athletes. Alex Yee – one of the favorites – initially missed the lead group, but got back to the front group in the first of nine bike laps.

While a number of other men also succeeded in getting back to the leading group, creating a peloton of 38 athletes, very little else actually happened during the bike. There were really no breakaways or athletes trying anything and for the objective viewer, that made the race somewhat boring at this stage. At the same time, the tension towards the concluding ten kilometers was building nicely. On the seventh bike lap Hayden Wilde tried to attack and while doing so the leading group briefly fell apart, but a few hundred meters later everyone got together once again.


German Jonas Schomburg was the fastest in T2 and also ran in the lead for the first kilometer, but then Wilde took over that lead. His pace was so fast that only Le Corre, Yee, and Leo Bergere could follow. While the men behind Wilde had to visibly work to keep up, Wilde’s face was remarkably impassive and so he seemed to be in total control. Not much later, even the French guys could not keep up and only Wilde and Yee remained.

With 2.5 kilometers to go, things started to get really interesting. Wilde, who was constantly in the lead while Yee chose to stay behind him, started to get a little fed up with that and occasionally moved to the side and looked a little annoyed. It didn’t impress Yee though, since he kept running behind Wilde. A kilometer later, Yee began to run beside Wilde anyway and even handed him a bottle of water.

The final meters were getting more exciting by the minute; Wilde and Yee were evenly matched, constantly looking at each other, and the pace was steadily increasing. When the finish line was in sight, Yee pulled a sprint and it proved just too much for Wilde. Yee therefore won the race after 1:43:30, while Wilde took the silver 10 seconds later. Bergere finished third at 29 seconds from the winner.