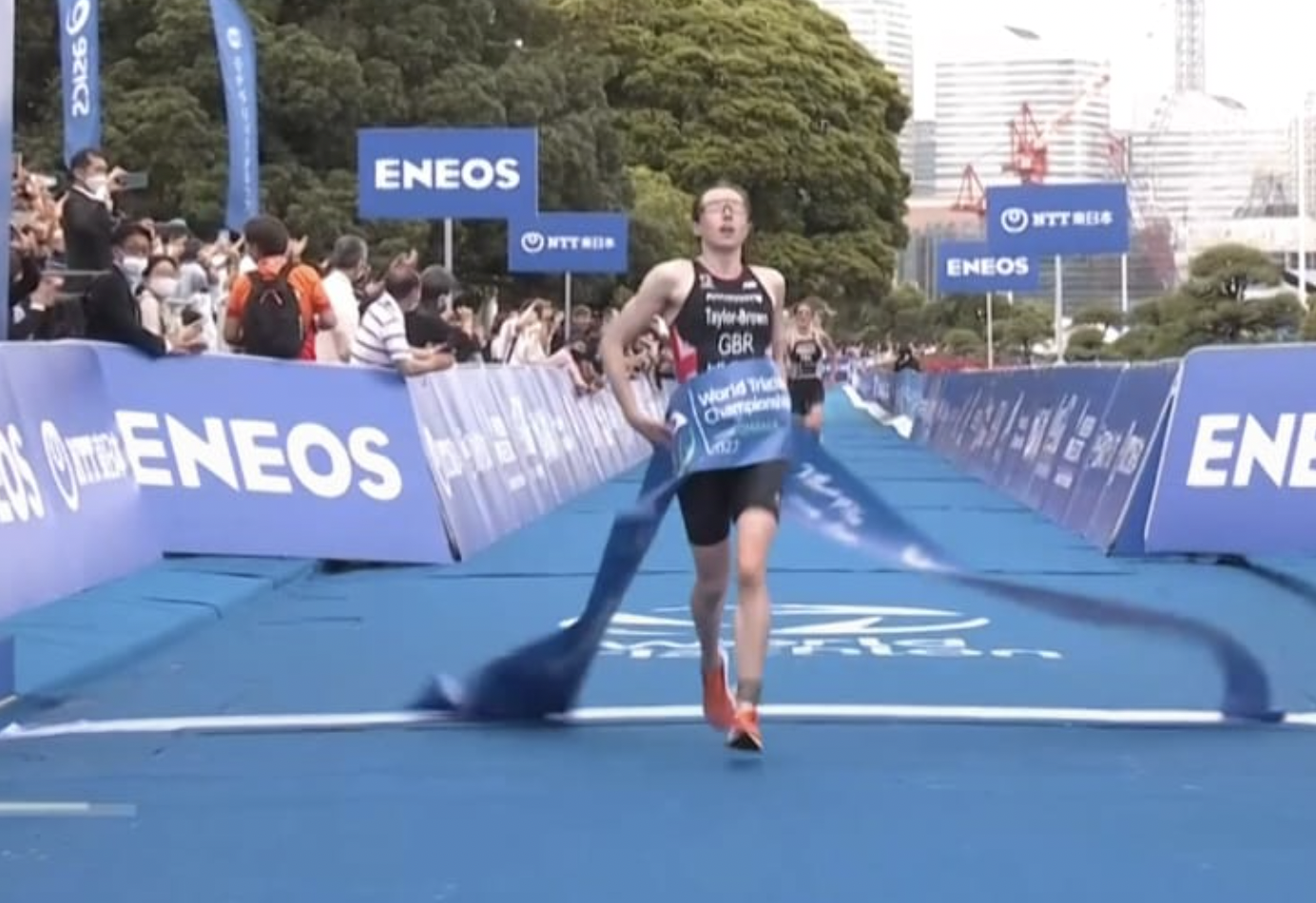 Georgia Taylor-Brown runs to a big victory at WTCS Yokohama

What a race for Britain’s Georgia Taylor-Brown. She made it clear in the first kilometer of the run, then showed to be patient before she attacked again: the Olympic silver medalist claimed the win of the World Triathlon Championship Series in Yokohama. Second place went to France’s Leonie Periault and the final podium spot was for Olympic champion Flora Duffy.

In the water, swimming 1500 meters, a group of 14 athletes managed to create a little gap to the rest of the field. Among them were France’s Cassandre Beaugrand, Duffy and Dutch Maya Kingma. After an Australian exit, Beaugrand took the lead and thanks to an extra push in the final stretch, she was first out of the water. Kingma followed two seconds later, but sprinted to the front in T1. That – among others – Kingma, Duffy, America’s Taylor Knibb and Taylor-Brown were burning to take off with a little lead group was clear, because they attacked right away.


With a technical bike course ahead – even more technical than normal due to the rain – the group worked hard on the turns to try to drop as many people, and to widen the gap to the chase group. It were Duffy, Kingma, Taylor-Brown and Knibb who were doing most of the hard work. They were clearly pushing the pace, because some athletes in the back could barely hang in.

Lindemann and Beaugrand out after a crash

The wet and technical course, combined with a challenging pace, saw the lead group shrink after a few kilometers. Lindemann and Beaugrand were among the athletes that lost touch. In their case, that was due to a crash just before they entered the third of nine laps.

Right after that Kingma, Duffy, Taylor-Brown and Knibb took a chance and tried to break away from the rest of their group. They lasted for a few hundred meters, but then the other five athletes were right back again. Halfway through the bike part, the lead group was nine athletes strong.

Lindemann and Beaugrand were definitely not the only athletes struggling with the technical and wet course, because another handful of athletes had to quit their race after a crash.

Although, some athletes in front seemed eager to try to break away, none of them was able to do so in the final laps. The chase group was far out of sight, though. Entering T2, the chasing athletes were nearly three minutes behind.

Kingma had another great transition and was first out onto the run course. Together with Taylor-Brown she ran to the front, but after approximately 500 meters, Kingma had to let the British athlete go. Behind them Duffy, Periault and Emma Lombardi tried to get back to the front. After two km, these three athletes bridged the gap to Kingma. And while Taylor-Brown had created a gap of seven seconds after the first lap, they caught back up with her too soon after that. That means that halfway through the run there were five athletes, running side by side, in front.

In the final kilometers, Taylor-Brown showed to have some matches left to burn. After Periault tried to take off, Taylor-Brown caught back up with her and went off on her own with about 1000 meters to go. And this time she didn’t let anyone get back to her. That means Taylor-Brown took a big win, Periault crossed the line in second place, and third place was claimed by Duffy. Lombardi finished in fourth and Kingma took fifth.