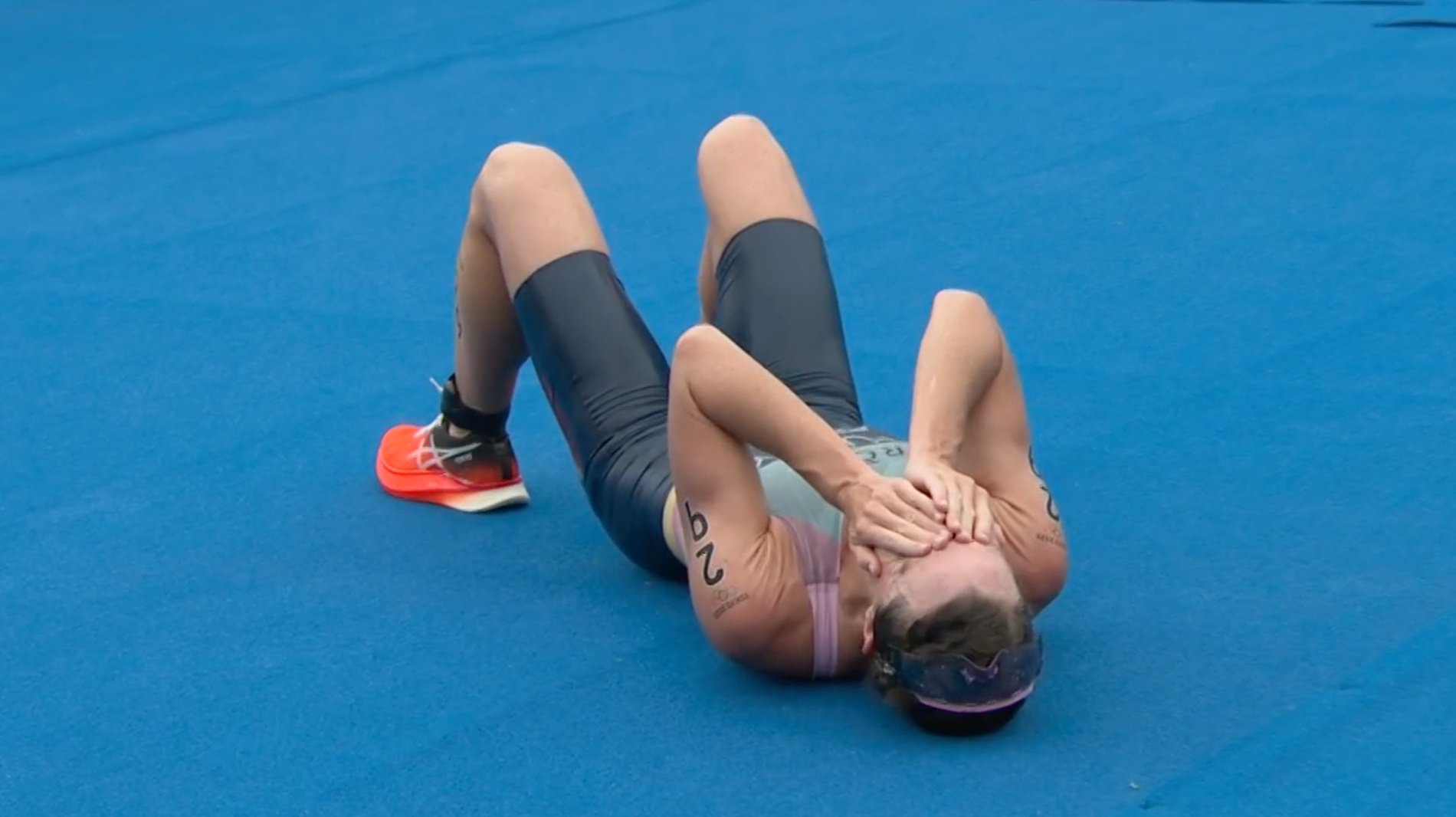 Bermuda’s star triathlete Flora Duffy left no room for doubt during the run and earned herself an Olympic gold medal. It is a great addition to her already impressive palmares that include among other achievements, the 2016 and 2017 world titles. Duffy didn’t wait until the final part of the run leg, instead showing her competitors in the first km that nobody was going to match her run speed. Britain’s Georgia Taylor-Brown managed to fight her way back to the front, passing America’s Katie Zaferes entering the final lap. Taylor-Brown (+1:14) crossed the line in second place to claim silver. Zaferes took home bronze (+1:27). Duffy completed and won the race in 1:55:36

Postponed start and a breakaway during the swim

Due to extreme weather conditions – heavy rainfall and wind – the start was postponed for fifteen minutes. Although the sky still looked gray, at 06:45 local time, the athletes dove into the water. During the first lap of the swim – which was 950 meters – it was Britain’s Jessica Learmonth, Brazil’s Vittoria Lopes and Zaferes who quickly moved to the front. A big name that was missing was Maya Kingma’s (NLD), who is usually one of the ladies leading this first discipline. Kingma was considered a medal favorite after finishing third place at WTCS Yokohama earlier this year then winning WTCS Leeds at the beginning of June, but didn’t seem to race to her potential today.

The first lap of the swim was led by Learmonth, who took 11:38 to cover the first 950 meters. Lopes, Zaferes and America’s Summer Rappaport followed right in her slipstream. By the time the first athletes got out of the water, a small group of seven enjoyed a gap of about 30 seconds on the chasers. This little group – Duffy, Learmonth, Zaferes, Taylor-Brown, Lopes, Rappaport and Laura Lindemann (GER) – hit the bike course first. Given the extreme weather conditions, it was unlikely we would see a big group form, as we saw in the men’s race.


Slipping through the bike leg

The slippery course didn’t make it any easier for the chasers to catch the front pack. That was especially true on the blue carpet – which mades things tricky as the riders started aquaplaning. After 10 km, the gap between the first seven women and the chase group – that included ten athletes, among them Nicola Spirig (SUI), Kingma and Emma Jeffcoat (AUS) – had increased to 1:04.


Rappaport drops out of front pack

Halfway through the bike course, Rappaport was dropped by the leading women. The gap between the front group and chasers remained at around 1:15. Lopes was the next in the lead group who seemed to be struggling with the wet corners of this technical bike leg. The Brazilian athlete carefully entered the corners, allowing a bit of space between herself and the other five women. For a while, though, she managed to get back to the group, but in the final kilometers she had to accept she couldn’t keep up any longer. A similar thing happened to Taylor-Brown, who lost the connection right when T2 got into sight due to a flat tire.


Five women first out on the run course

Thanks to a quick transition, Duffy was the first to run out of T2. Zaferes, Lindemann and Duffy followed on her heels. Taylor-Brown lost a few seconds due to her flat tire and entered the run course 22 seconds after the leaders. Spirig was the first of the chase group to put on her running shoes (+1 min). Duffy and Zaferes didn’t wait to make a move. Straight away these women ran away from the chasers, but after about one km it was clear that it was Duffy who had most left in the tank.

It was clearly going to be a less exciting run than during yesterday’s men’s race, where Blummenfelt waited until the final few kms to take off. After one km, it seemed like it was going to be Duffy taking the gold, Zaferes earning silver and the fight for bronze was on between Taylor-Brown and Lindemann. With 2.5 km of the ten km ticked off, it was Duffy in first place, Zaferes in second (+0:17), Taylor-Brown in third (+0:26) and Lindemann in fourth place (+0:38).

While nobody was going to get between Duffy and the win, Taylor-Brown started to become a threat to Zaferes for second place. As they entered teh fourth and final run lap, the British athlete passed Zaferes. From there the podium positions wouldn’t shuffle anymore. It was Duffy who lifted the tape 1:55:36, celebrating her golden race. Georgia Taylor-Brown earned herself the silver medal (+1:14) and Zaferes completed the podium, taking bronze (+1:27). A surprise coming from behind was Dutch athlete Rachel Klamer, who biked in the chase pack and moved up many positions in the ranking during the run. She crossed the line in fourth place (+2:12).