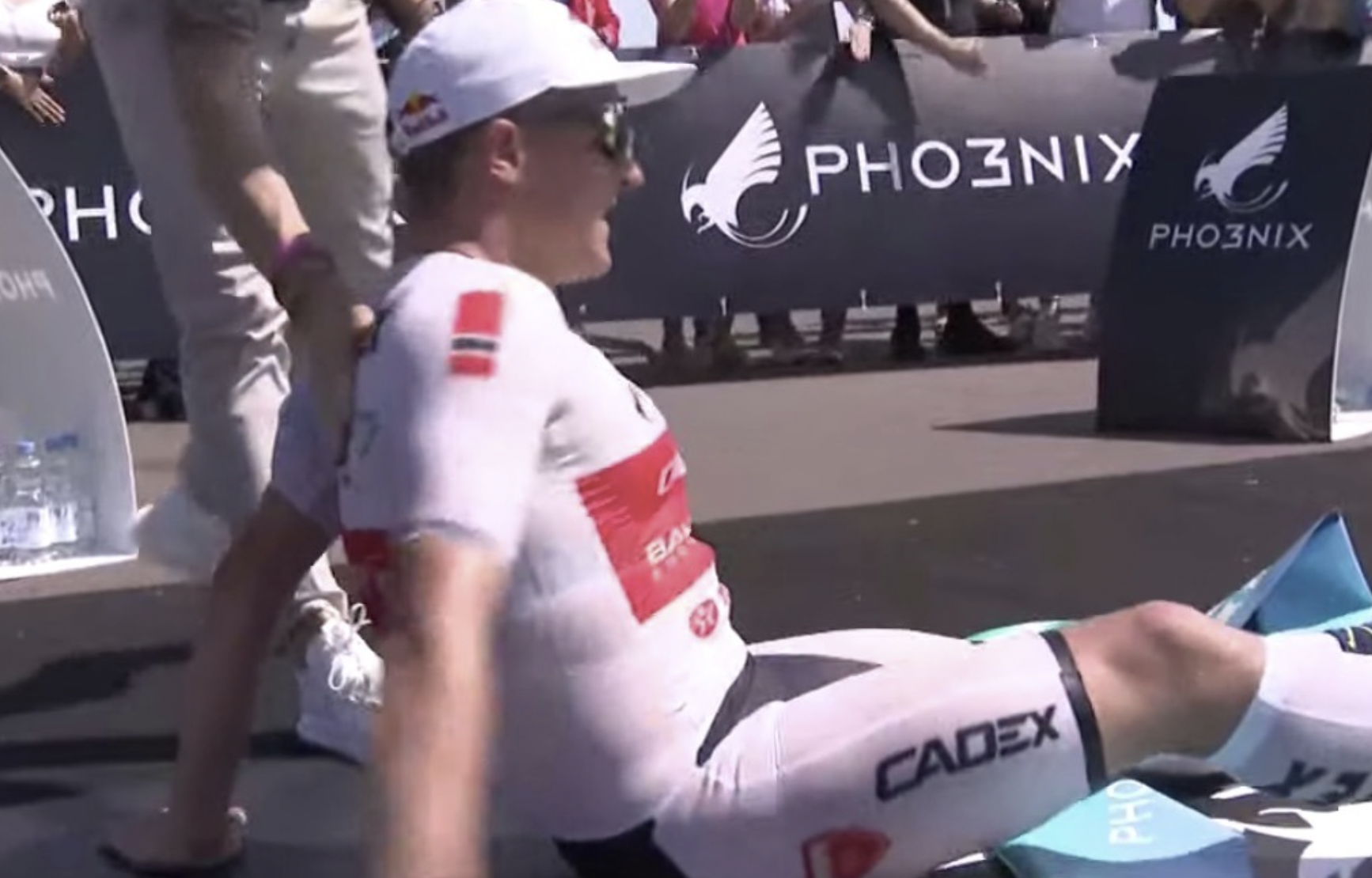 Olympic Champion, World Triathlon World Champion, Ironman World Champion and now a Sub7 finisher: Kristian Blummenfelt is an absolute triathlon legend. There’s no stopping this incredible Norwegian athlete, who left no space for doubt during the Pho3nix Sub7 project, as he ended up crossing the line after 6:43:44 hours. Blummenfelt was not the only one who had an amazing race, because Joe Skipper also finished Sub7. The British athlete stopped the clock after 6:47:36 hours.

In the women’s race, it was Kat Matthews who broke Sub8.

In contrast with the other athletes, Blummenfelt decided to appoint just one pacer during the swim: the Dutch open water swimmer Lars Botelier. Within a few meters Blummenfelt already enjoyed an advantage to Skipper and that only increased during the rest of the swim. Skipper’s team – led by Alistair Brownlee – suffered quite a deficit in the water.

Surprisingly, Skipper chose to start his swim on Brownlee’s hip, while he had another pacer behind him. The three formed a pyramid, but Skipper only benefited from Brownlee’s draft. Blummenfelt, on the other hand, was right in Botelier’s feet.

With a fast swim time of 48 minutes, Blummenfelt had a great buffer to Skipper when he reached T1. Skipper exited the water approximately five minutes later, clocking a 53:24-minute swim.

Right in the wheel of six pacers, Blummenfelt completed the first nineteen kilometers to get from the swim exit to the Lausitzring race circuit, where the rest of the bike part – with laps of approximately six km – would take place.

Skipper joined his five pacers. Different from other athletes, Skipper decided to make use of all his athletes from the Lausitzring onwards. That means the British athlete had eight athletes to hide behind, while Blummenfelt settled in behind six of his pacers, who would swap in and out with some athletes on the sideline.

Once Blummenfelt reached the Lausitzring his team had a first “refresh”, which was smooth as some athletes went up the ring, while others moved in. Getting to the circuit, Blummenfelt averaged at 51 km per hour. Skipper, on the other hand, noted 53.7 km per hour during the first 20K.


At about 50K, Blummenfelt’s team nearly had a crash, with one of the athletes almost hitting the wheel of another pacer. Fortunately, all athletes – including Blummenfelt himself – anticipated quickly and avoided what could have been a big crash.

Over 55 km, Skipper had cut the gap to Blummenfelt in half. At this point, he was only 2:30 minutes behind the Norwegian athlete. Skipper may have joined the Pho3nix Sub7 project at the very last moment – given Brownlee’s withdrawal due to an injury – his team was well-adjusted to one another. The changes – from front to back – were smooth and there was barely any loss of speed.

At 90K, Skipper’s team started to get team Blummenfelt in sight. With another half of the bike part to go, Skipper was only 24 seconds behind the Olympic Champion. After 103K it was done for Blummenfelt, as Skipper passed, saying “see you later”.


Although, Skipper’s team of eight – excluding Skipper himself – had planned to stay together the entire 180K, eventually two athletes were swapped in order to allow them to rest a little. Skipper was still right in the wheel of the other six athletes.

During the second part of the bike, Skipper managed to extend his lead on Blummenfelt to 2:16 minutes. Meanwhile, Blummenfelt seemed to struggle a little, as he was in a discussion with the team staff who were in the support car. With a bike time of 3:16:42 hours, Skipper reached the highest average speed (54.9 km/h). Blummenfelt completed the 180K in 3:24:22 hours, good for a speed of 52.8 km/h.

Athletes were allowed to be a bit creative within the rules when it comes to their support. Skipper therefor decided to have someone bike behind him with a water pump in order to cool him down. And some cooldown was very welcome, because the temperatures in the east of Germany were sky-high. Meanwhile, Blummenfelt had joined one of his Kenyan pacemakers on the run and started to chase down Skipper.

After approximately 14 km, Blummenfelt – running a pace of 3:31 min/km – had closed the gap to Skipper to 45 seconds, which made Skipper start to feel the Norwegian breathing down his neck. Skipper opened the marathon by running 3:39 min/km.


18K into the run, it was Blummenfelt’s turn to take over Skipper. The two exchanged some words and a smile, before Blummenfelt was off.

Blummenfelt continued to complete his marathon with great success. Running 2:30:50 hours on the marathon, Blummenfelt took the win in the fastest unofficial time on a Long Distance ever: 6:43:44 hours. Skipper went on to run a 2:36:43-hour marathon, and he crossed the line after 6:47:36 hours.