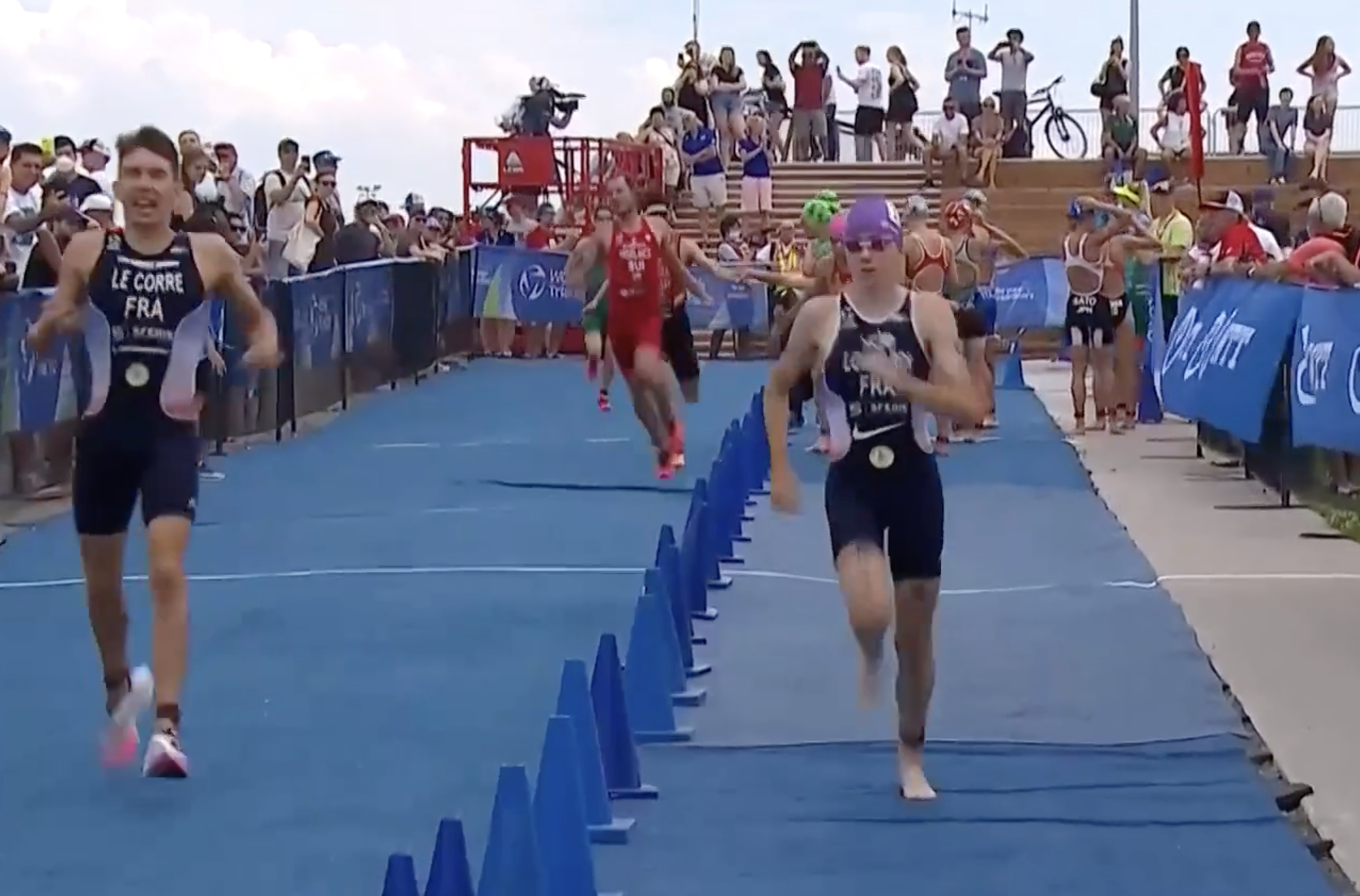 The French Mixed Relay team just swam, bike and ran to an incredible victory at the World Championship in Montreal. The team – consisting of Pierre Le Corre, Emma Lombardi, Vincent Luis and Cassandre Beaugrand – placed an attack in the third leg and didn’t allow any of their chasers to get back anymore. Great Britain ended up finishing in second place, despite a penalty that they had to serve right before the finish. America got the honor to complete the podium. Each of the four relay athletes had to swim 300 meters, bike 6.6 km and run 1.9 km today.

In the first leg, most of the field stayed together. After the swim, there weren’t any big gaps and that saw everything merge into a big group during the bike part. On the run, New Zealand’s Hayden Wilde showed to possess the strongest run legs of the field, as he provided their next athlete with a nice starting position. After a strong run by Britain’s Alex Yee, they followed in second place (+0:01). Brazil was third into the water (+0:06).

After that second swim a little group took shape with Brazil, Great Britain, France, New Zealand and Australia. The first five countries were within eight seconds from each other once they ran into T1. The gap towards sixth place – Spain – was seventeen seconds. On the bike, Australia initially lost touch, which saw them end up in “no man’s land” before they were helped back to the front by the athletes that approached from behind. Eventually, most of the field came back together, creating a lead pack of twelve.

On the second run, Denmark’s Alberte Kjar Pedersen and France’s Emma Lombardi created a big lead. The two countries were 14 seconds ahead of Norway, which was third into the water for the third leg. Great Britain followed in fourth place (+0:18), America in fifth (+0:21) and Swiss in sixth position (+0:21).

Denmark may have had a great run and therefor a nice buffer when entering the third leg, France took over in the blink of an eye. With Vincent Luis swimming strong, the country was off. Meanwhile, some other countries had moved to the front too. In T1, New Zealand, America, Great Britain, Swiss, Denmark and Norway grabbed their bikes to try and get back to France.

They didn’t manage, though. Luis was far off and only extended his lead during the bike and run part. Only New Zealand and America were able to sort of hang on. They were 21 and 36 seconds respectively behind France when they ticked off their last athlete. Great Britain followed nearly a minute later in a sixth place.

In the final leg, Beaugrand continued what Luis had started. In the water, she extended their lead to 26 seconds. America was first out of the water and New Zealand third (+0:34). On the bike, Georgia Taylor-Brown made an incredible effort to try and reach this little chase group, and she eventually managed to do so.

In T2, France was still in the lead, enjoying an 11-second advantage to Great Britain, America and New Zealand. While France was untouchable at front and ran to a big victory, Taylor-Brown fought hard for the silver medal. She ended up claiming that second place despite serving a penalty (+0:23). America earned the final podium spot (+0:30).