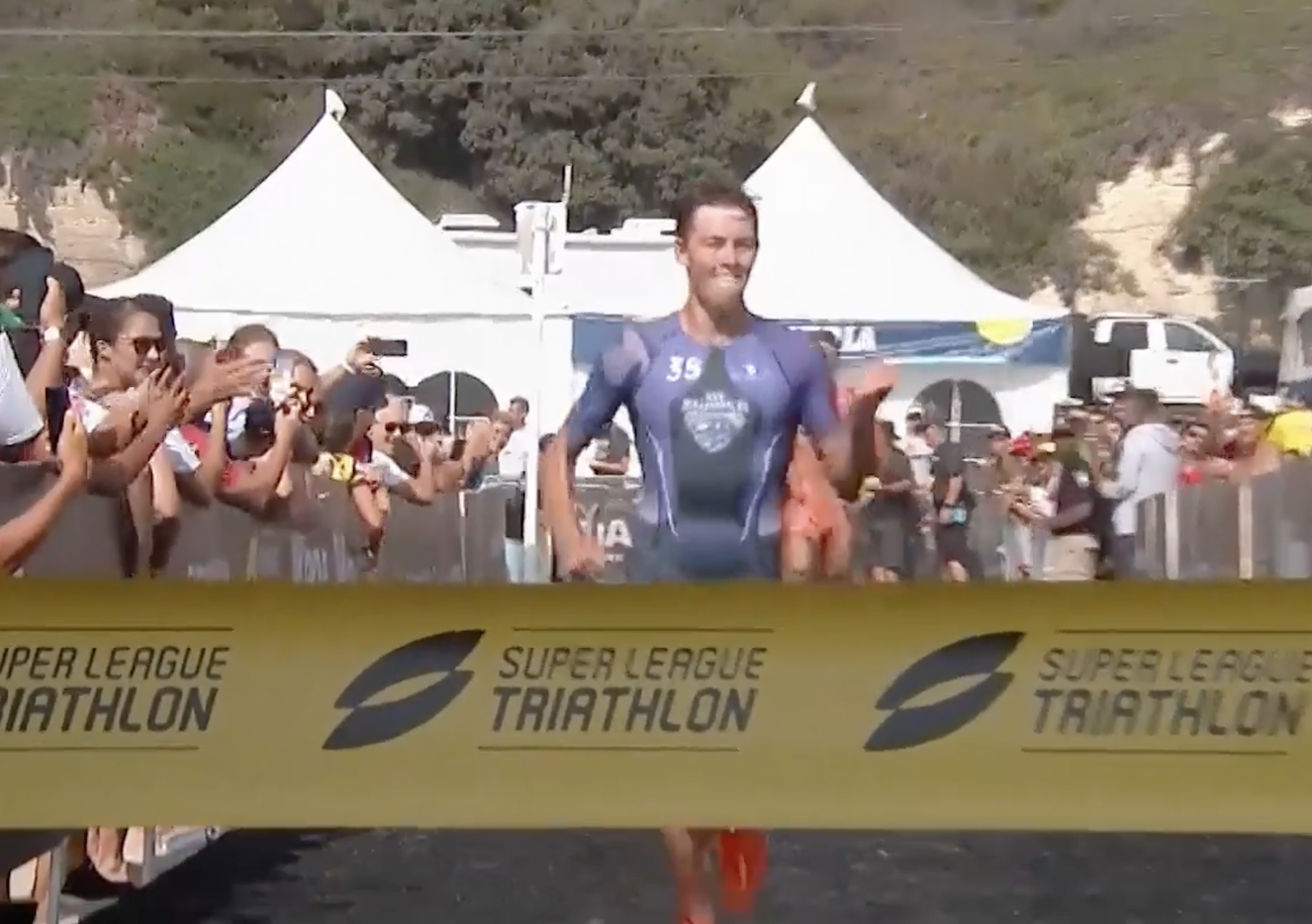 New Zealand’s Hayden Wilde lived up to everyone’s expectations as he won the Super League Triathlon Championship Series in Malibu. He could be found in front throughout all three legs, but finished it off with a strong final run. He shared the podium with Israel’s Shachar Sagiv and Portugal’s Vasco Vilaca, who was bitten by a seal earlier this week.

Athletes raced three Short-Distance triathlons of 300 meters of swimming, 4000 meters of cycling and 1600 meters of running. Three times in a row – with a short break – athletes completed a swim-bike-run. The third and final leg had a pursuit start. Athletes, who were more than 90 seconds behind the first athlete at any point during the race, were eliminated.

Leg one: Cameron Wurf is out

Matt Hauser (AUS) and Tayler Reid (NZL) fought hard to be the first athlete back in T1, but in the end it was Hauser who got that advantage with just a few centimeters of difference.

Long Distance triathlete and pro cyclist Cameron Wurf challenged himself with some interesting detour on his way to Kona, but he soon figured out that his swim wasn’t good enough to keep up with these fast guys. 45 seconds behind the first man, the Australian exited the water.

On the bike, a big group tried to hunt down Hauser, who was left alone in front. It didn’t take long before everything changed, though, as Hauser – at the exact same spot as Taylor-Brown – crashed with his bike. Hauser immediately saw the big chase pack pass by.

Hauser ended up racking his bike in 16th position, about half a minute behind the lead group. Wurf started the run with a 1:06-minute deficit in 18th place. Halfway through the run, the Australian was eliminated because of his deficit.

During the run, Hayden Wilde ran to first place, Sagiv crossed the line in second place (+0:01) and Germany’s Valentin Wernz took third (+0:05). Hauser pushed himself to the finish line, but was eliminated as he was among the last finishers.

South Africa’s Jamie Riddle was the first person back on the beach after he caught a nice wave out, Reid followed two seconds later in second place and the rest of the field was more than twelve seconds behind.

While Riddle was soon caught by two athletes from behind, Reid stayed in front on his own during the bike part. A few km into the bike part, another group merged with the group of Riddle and continued to chase down Reid. They weren’t able to catch him, though.

When starting the run, Reid was still well ahead of the rest of the field, but he had to deal with a strong Wilde, who did everything he could to run to the front. And Wilde wasn’t the only one to pass by Reid. Wilde took the win, Sagiv – again – took second (+0:07) and Riddle finished in third (+0:07). Reid ended up crossing the line in 6th place.


Leg three: Wilde finishes it off

With a buffer of eight seconds, Wilde got to start the third leg in first place. In the water, Wilde lost that gap, though, which means he was back together with a little group once he reached T1. In that group were five athletes: Vilaca, Riddle, Sagiv, Wilde and Britain’s Daniel Dixon.

On the bike, Chase McQueen (USA) was the only person able to catch that group, which meant a lead group of six took shape. Once that group started the run, nobody was surprised to see Wilde take off. Although Sagiv kept the pressure on, there was nobody who could get in between Wilde and the win anymore. Sagiv finished in second place (+0:03) and Vilaca rounded the podium (+0:09).