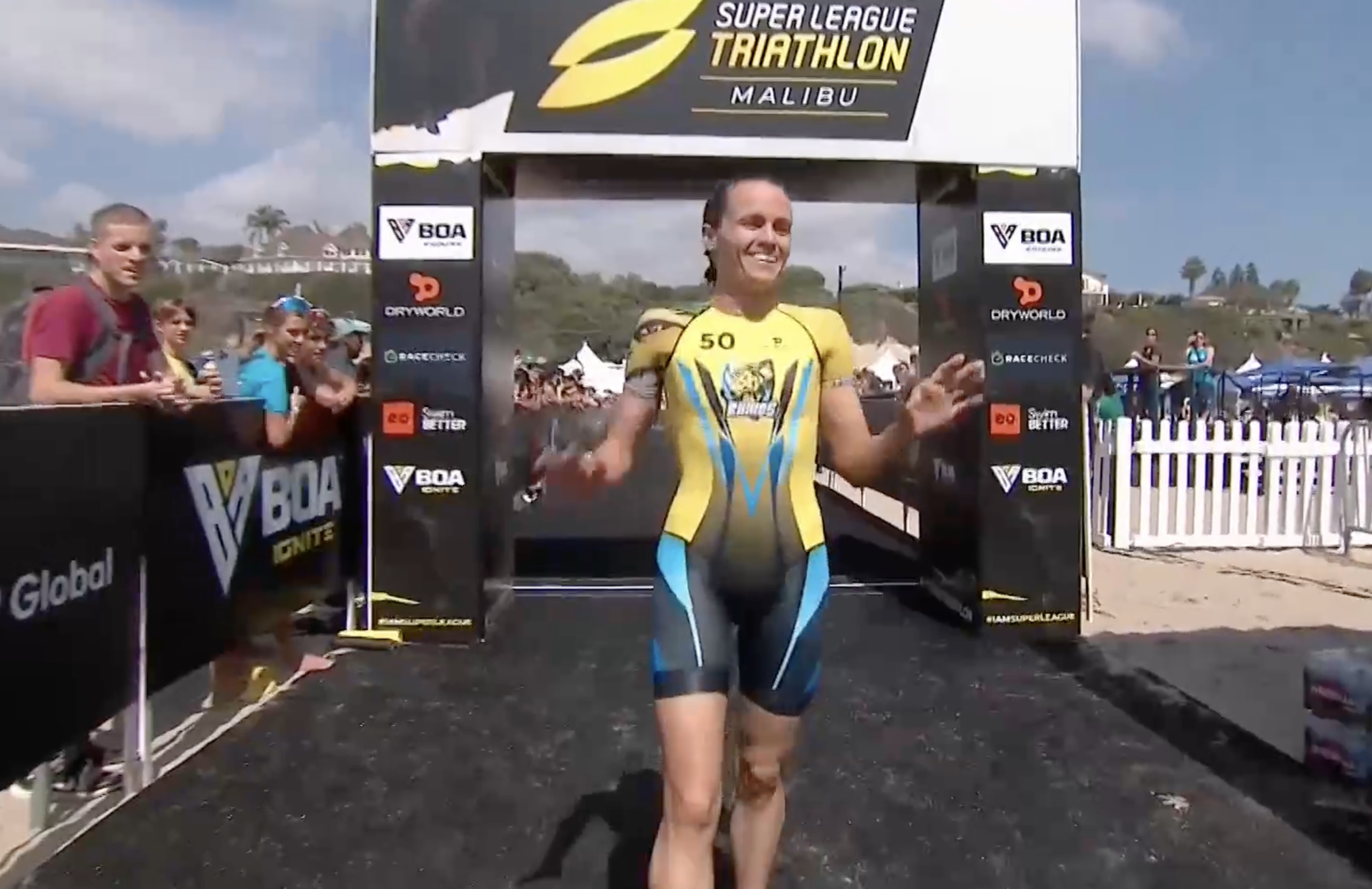 Spivey celebrates gold at SLT Malibu, while Taylor-Brown settles in third due to a crash

America’s Taylor Spivey just celebrated the home victory at the Super League Triathlon Championship Series in Malibu. For a while, it seemed like it was going to be Britain’s Georgia Taylor-Brown – winner of the SLT Championship Series in Munich – who would do it again, but a bike crash changed everything. It was Spain’s Miriam Casillas Garcias who took second, while Taylor-Brown fought back to bronze.

Athletes raced three Short-Distance triathlons of 300 meters of swimming, 4000 meters of cycling and 1600 meters of running. Three times in a row – with a short break – athletes completed a swim-bike-run. The third and final leg had a pursuit start. Athletes, who were more than 90 seconds behind the first athlete at any point during the race, were eliminated.

Leg one: Taylor-Brown “easily” runs to the win

It may have been Australia’s Emma Jeffcoat who was first out of the water, on the beach – and before T1 – Luxembourg’s Jeanne Lehaire caught up with her. In the lead, Jeffcoat, Lehaire and Britain’s Jessica Fullagar were free, while behind them a pack of about fifteen athletes took shape during the bike part. Just before T2, the group closed the gap to be only a second or two. That meant it all came down to the run.

Taylor-Brown showed to be the strongest runner straight from the start, as she took a lead and seemed to “easily” run towards the win. Initially Spain’s Miriam Casillas Garcias, America’s Taylor Spivey and Italy’s Verena Steinhauswer managed to stay with her, but eventually also strong runner Beth Potter (GBR) came up from behind. It was Taylor-Brown who crossed the line in first place, Spivey ran to second (+0:02) and Potter ended up in third (+0:02).

Let two: chaos on the bike

While everyone expected Taylor-Brown to once again dominate the entire race, that changed when she crashed during the bike part of the second leg. While trying to hunt down some fast swimmers, the British athlete missed a turn and ended up in the fences. Once she had her chain back on, Taylor-Brown tried to get back in the race. The chaos didn’t stop there, because soon after that another group of athletes crashed in one of the tight turns, which saw quite some athletes drop out.

On her own, America’s Summer Rappaport rode to T2, where she racked her bike five seconds ahead of Casillas Garcias, Steinhauser and Spivey; who were, just like in leg one, well in the mix. Taylor-Brown ended up starting the run in 17th place (+0:30).

Rappaport was unstoppable in front. The American athlete claimed the victory in this second leg. Second place went to Casillas Garcias (+0:06) and Spivey finished in third (+0:07). Taylor-Brown crossed the line in 10th position (+0:32).

Based on the time differences from the first two legs, athletes started their third leg (see illustration above). It was Spivey who got to dive into the water in first place, followed by Casillas Garcias. Taylor-Brown ran towards the sea in 6th position (+0:22).