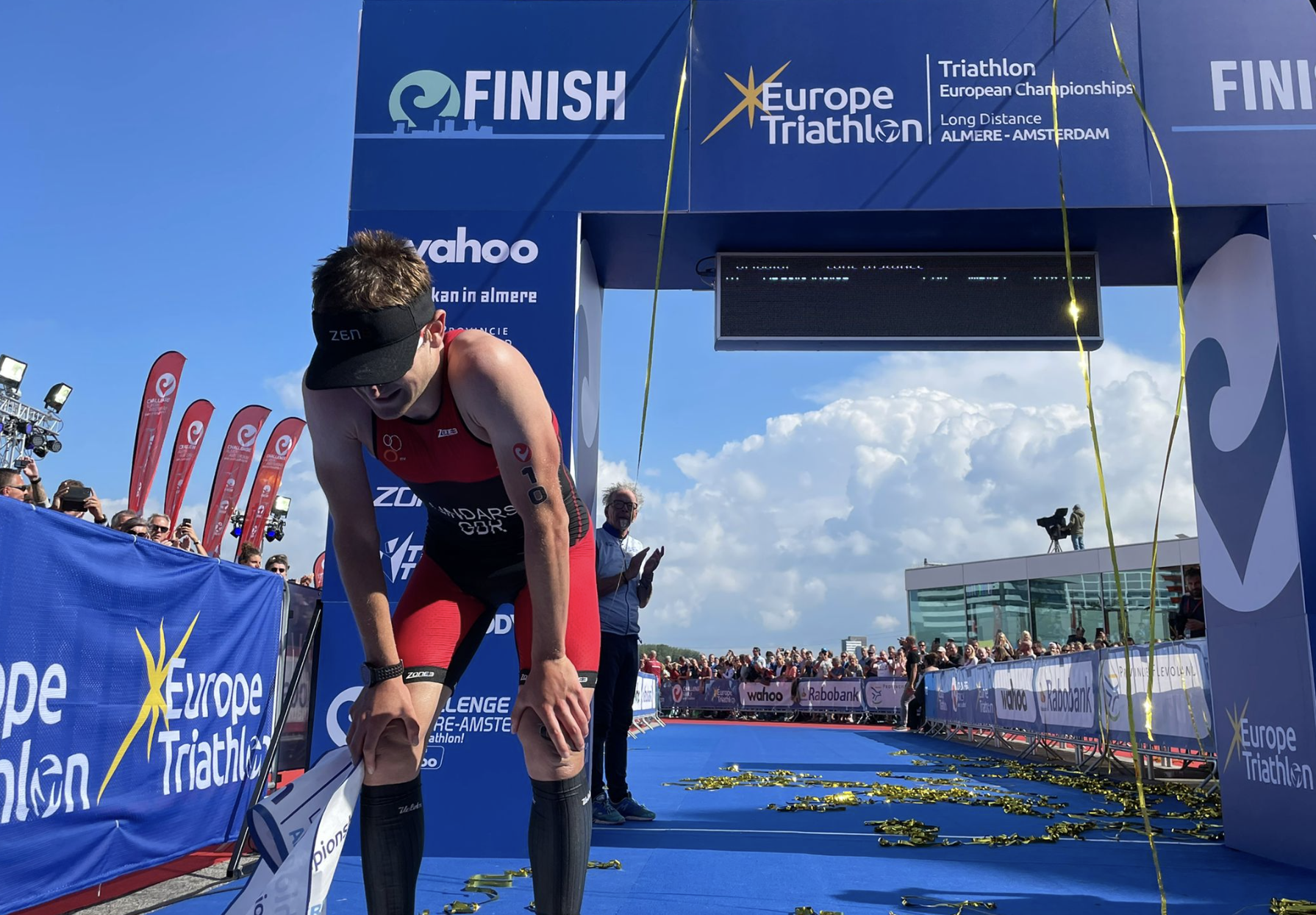 A so-called sufferfest; that’s what Challenge Almere-Amsterdam turned into. From flat tires, to mechanical issues and athletes blowing themselves up when pushing against the wind during the bike part. Kieran Lindars wasn’t having any of it, though. The British athlete blasted to a strong win, not only of Challenge Almere-Amsterdam, but also the European Championship Long Distance. He did so in an incredibly fast time of 7:55:44 hours.

It came as no surprise that it was Germany’s Lukasz Wojt who was first out of the water. The former swimmer was well ahead of the rest of the field, leading the swim with two minutes. Wojt needed 44:34 minutes to reach his bike. Behind him, a group with Dutch Niek Heldoorn, Dutch Evert Scheltinga, Belgium’s Pamphiel Pareyn and Britain’s Kieran Lindars exited the water. Milan Brons followed with a three-minute deficit.

While it was raining cats and dogs during the first hour on the bike, quite some athletes experienced issues. Scheltinga, who was in the chase group behind Wojt, had a flat tire that he could fix, but was forced to let go of the group. Not long after that, Wojt ended up on the side of the road with some issues too, which saw him pull out of the race. That meant it were now Heldoorn, Pareyn and Lindars in the lead.

Meanwhile, from behind, Starykowicz and Brons were approaching rapidly. Brons was first to reach up in front, after which Starykowicz joined him. The two started to battle and overtake each other until just before T2, when Starkyowicz decided to take off on his own. Brons dropped back to about 1:30 minute, and that meant it was Starykowicz who got to conquer the run in first place. The chase group was nearly eight minutes behind the first man once they racked their bikes back in T2. Austria’s Thomas Steger and Dutch Evert Scheltinga were having a hard day out and started the run with the third chase pack more than 11 minutes behind Starykowicz.

On the run, the battle was on between Starykowicz and Brons. Brons started his hunt strong, but in the second lap it was actually Starykowicz – who usually struggled with the run – who ran slightly faster. However, in the first few kilometers, Brons had already shrunk the gap between the two to one minute. Behind them, it was Lindars doing the chasing, followed by Heldoorn at about one minute.

With about a third of the marathon done, the real suffering started. Brons had to walk parts and therefor lost touch with Starykowicz and Lindars, who were now in a respective first and second place. In fourth place, Norway’s Kristian Grue was able to keep his pace up, while also Heldoorn – fifth place – had to slow down compared to the rest of the guys in front of him. Brons wasn’t able to get back to speed and therefor had to let Grue and Heldoorn run past him.

In front of the race, Lindars was unstoppable. After running to second place, he continued to hunt for gold. About halfway through the race, he got it in his hands and he wasn’t planning of letting it go anymore. After running the first half-marathon in an impressive time of 1:16:08 Lindars dropped the pace slightly, while still leading the event with a big margin to the second-place athlete: Grue, who had overtaken Starykowicz.

With only a few kilometers to go, Heldoorn surprisingly managed to pass by Starykowicz and Grue. It was therefor Lindars bringing home the victory, Heldoorn taking second and Starykowicz rounding the podium.