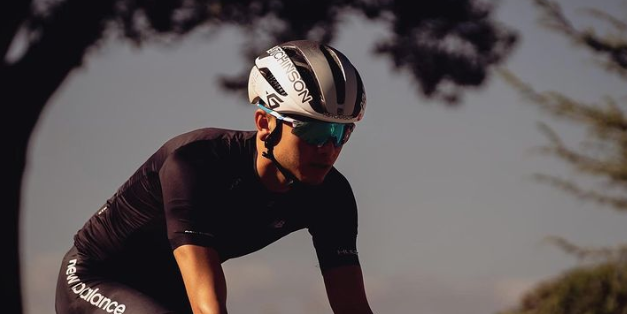 Racing from behind and cramping for Alex Yee, but still a strong victory WTCS Cagliari

It was a race in which one attack after another was placed, but in the end it was a man who came from behind who ran away with the victory: Alex Yee was initially put at a disadvantage during the WTCS Cagliari and suffered from cramp during the run, but still he just won the strongly contested race.

During the swim (1500 meter), a large group stayed together and no serious differences were made. The swim was fast, though, because when Márk Deváy came back out of the water as first athlete leading the pack, there was only 18:24 minutes on the clock.

It was the same Deváy who took the lead on the bike (40km), together with Matthew Hauser, but the two were overtaken within a few kilometers by a large peloton. Behind this leading group there was an equally large group with a number of favorites that had lost connection, including Alex Yee, Mario Mola and Jelle Geens. They were riding at thirty seconds behind.

After about ten kilometers on the bike, it was Léo Bergere who found it a little too slow at the front, so he rode away on his own. A few kilometers later he was joined by Jonas Schomburg, but their lead never got bigger than ten seconds and the chasing peloton caught up with them not much later. Meanwhile, Alex Yee had also joined them up front, riding to the lead group along with a few others. The other men – so Mola and Geens among them – failed to do so and ended up riding in a group that ended up over two minutes behind.

In the final kilometers on the bike, Jonathan Brownlee and Jumpei Furuya rode away, also grabbing a 10-second gap. They did manage to stay away and grab even more of a lead – which was impressive – and eventually came into T2 with a 30-second lead. Brownlee eagerly took advantage of that by immediately running away and leading the race solo from then on. Furuya soon fell back into the field.

Despite Brownlee running strong, he was still overtaken by Yee within the first five kilometers; quite impressive, since Yee had thus previously had to make a huge effort to ride back to the lead group. Still, it did not seem to stand in Yee’s way of an impressive run, and so when he caught up with Brownlee, he passed him immediately. Better to say; he immediately left Brownlee behind.

Yet that didn’t go so easily, as a few hundred meters further Yee had to pause for a moment to fight cramping. He bent forward a few times grabbing at his hamstrings, but was able to continue just before Brownlee rejoined him.

From then on, things got particularly tough for Yee, but he was able to maintain his lead. In the end, he won the race in 1:40:19, eight seconds ahead of a very strong running Jonathan Brownlee. Brazilian Manoel Messias sprinted to third place eleven seconds from the winner, at the expense of German Lasse Lührs.