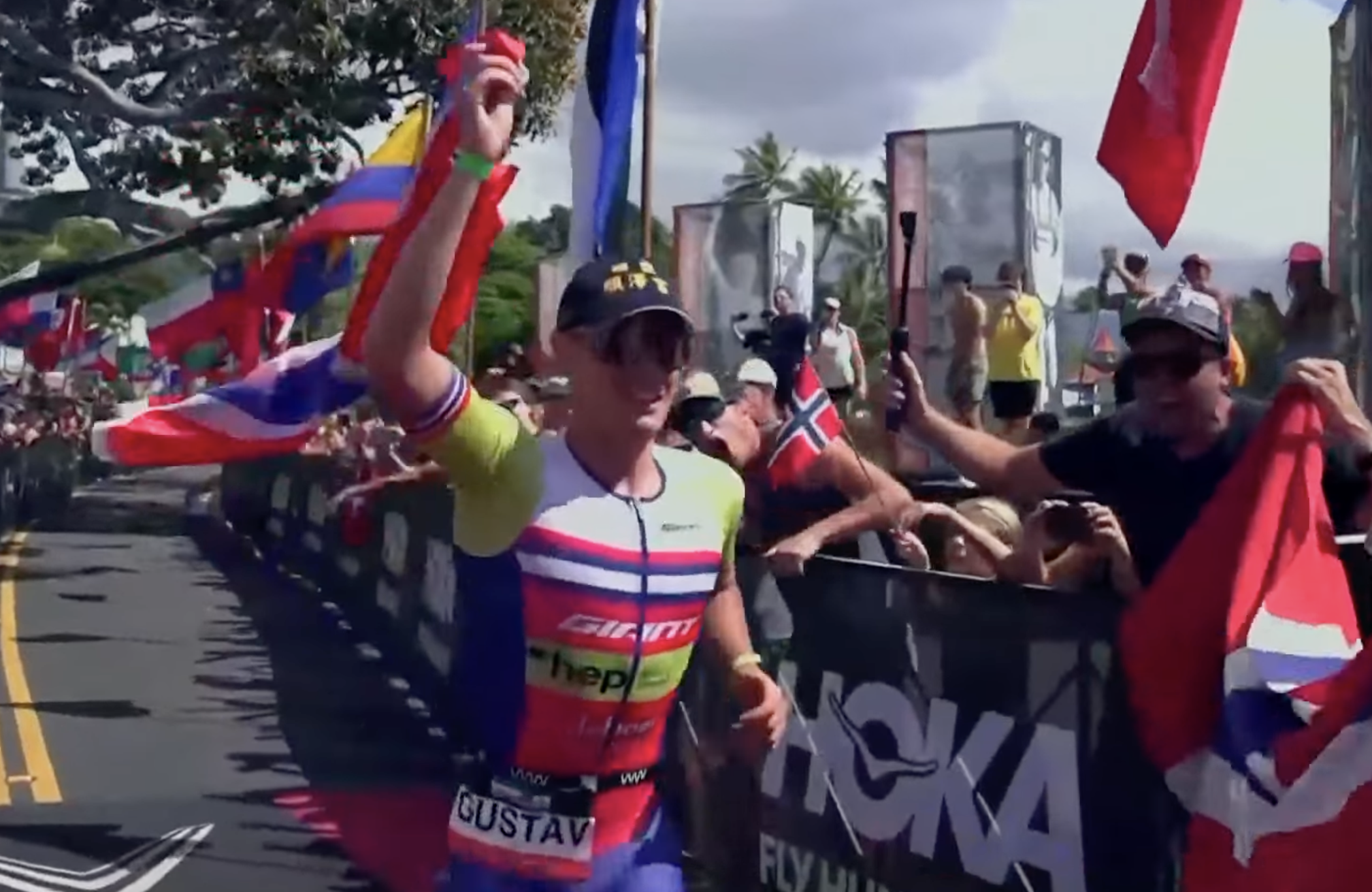 For a long time, it seemed like the 23-year-old Sam Laidlow was about to become the youngest Kona-winner ever, if it weren’t for Gustav Iden getting in his way. In the final kilometers of the run, Iden flew past the Frenchman and continued his incredibly strong race by sprinting towards a massive course record. Iden ended up claiming the victory. He finished in a time of 7:40:24 hours (the previous course record, held by Frodeno, 2019, was 7:51:13 hours).

Right after the finish, Iden – still full of energy, or so it seems – commented, smiling: “I think my plan was quite solid for a rookie, because apparently you can’t win this race when you race for the first time.” Adding: “The legend of the hat was bigger than the legend of the island.“

The race was exciting from start to finish: a big group of race favorites exited the water simultaneously, with Florian Angert as the fastest swimmer. The German climbed back onto the shore after 48:15 minutes, but was followed by approximately 30 men, who were all right in his feet. Angert would later get a penalty for drafting, which saw him drop back from a 3rd place to a position far down the field. It ended up ruining his chances at a strong performance.

On the bike, it was initially Australia’s Max Neumann who took charge, but he was soon visited by Laidlow. The two went off together, but there was quite some shuffling happening behind them. Eventually a lead group of five took shape, when also Blummenfelt, Iden and Ditlev bridged the gap.

Laidlow didn’t feel comfortable with the pace in that lead group, and decided to take off with about 50 km to go. The Frenchman completely disappeared out of sight for his chasers. He ended up enjoying a buffer of four minutes when back in T2. Ditlev had to deal with a setback, as he was given a penalty in the final half of the bike part and therefor had to stand still for five minutes before T2.

On the marathon, Laidlow was constantly leading, followed by Blummenfelt, Iden and Neumann. Neumann was the first who had to let go of the Norwegian train. After 30 km, Blummenfelt had to let Iden run off too. Within the blink of an eye, Iden continued to close the two-minute gap to Laidlow. Once he was at the front, he took over and left the French athlete behind, but not before giving him a high five and a pat on the shoulder.

From that moment on, it was clear Iden was going to be the man today. Not only did it become clear that he would become a World Champion, also he was running towards a new record. Iden ended up breaking the tape and smashing the previous course record – 7:51:13, held by Frodeno – as he stopped the clock after 7:40:24 hours.

Find more details about this incredible race in our liveticker.