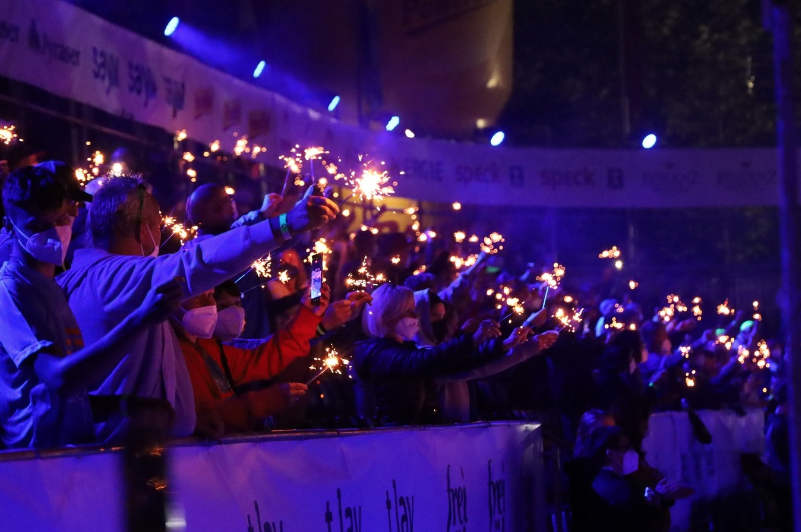 Last weekend, during the Sailfish Night of the Year, Challenge Roth was named Long Distance race of the year for the 11th time. Major competitors Ironman Frankfurt and the Ironman World Championship at Kona were defeated for the umpteenth time. How is that possible? What is the magic of Challenge Roth?

It needs little explanation that being named best race of the year is a wonderful compliment for the organization behind Challenge Roth, as well for the thousands of volunteers – more than seven thousand – who work every year to make the race an unforgettable memory for the thousands of athletes competing in the event. This is the first unique aspect of Challenge Roth: where else in the world would you find a race where there is even a queue to volunteer? Where else do all those volunteers get together shortly after the event to enjoy the aftermovie and a special volunteer movie together, some of which lasts for just under an hour?

Challenge Roth is community driven. Roth, a village where there is usually not much to do, at least not for the average tourist, transforms into one big triathlon Valhalla during the first weekend of July – and very occasionally the last weekend of June. All locals, as well as Germans from further afield, fall in love with the event and would never want to be without it. This is very different from, say, Kona, where Ironman is increasingly criticized and less and less well received by the people who live there. The criticism this year has only been exacerbated by Ironman’s choice to race not one, but two days.

So, Challenge Roth is supported by volunteers and the local community, but the organization is also very personally involved in the race. Where else in the world can you find a Race Director – Felix Walchshöfer – who at the end of race day is almost always in tears and for sure always emotional, addresses all the athletes in a speech to thank them for the great day. Of course, his mother and sister are always there: in the end, these are the three most important persons behind the event, obviously reinforced by a fine team of inspired organizers who, in most cases, have been associated with the event for years.


Speaking of that speech from Walchshöfer: it always precedes for a few minutes the spectacular fireworks show held at Challenge Roth. Every year, New Year’s Eve paled in comparison to the huge amount of fire pits shot into the air, while all the athletes – along with friends and family, of course – thronged together in the stadium, barely recovered from their own sporting achievement. Not infrequently, tears are shed here and goosebumps are all over.

Last year, for the first time, the fireworks were replaced by a light show. For a while there were fears that this laser show would be less spectacular than the usual fireworks, but nothing could be further from the truth. This experience was also an unforgettable moment for the thousands of people who witnessed it live.


Last but not least, of course, we cannot ignore the course. Sure, there are dozens if not hundreds of races with unforgettable courses, but riding Solar Hill is next-level. There is no race in the world that manages to bring so many spectators together in one place. As an athlete, you imagine yourself a professional cyclist climbing the Alpe d’Huez or any other famous mountain. You ride between rows of spectators and fans; some scream even louder than others and only at the last moment do they step aside so that you can pass through safely. Athletes ride up here with goosebumps all over their body.