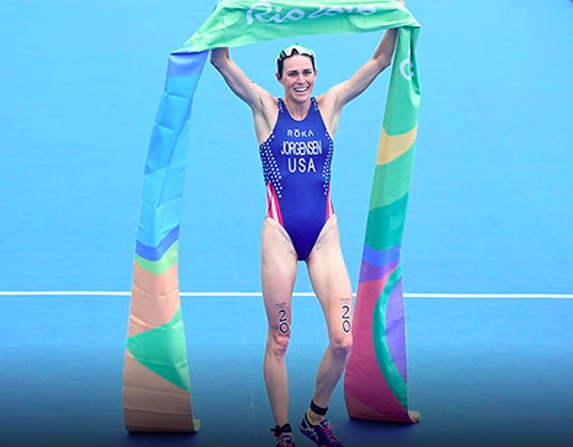 USA Triathlon has announced that Gwen Jorgensen — the first US athlete to win an Olympic triathlon gold medal, a current professional runner and Tokyo Olympic hopeful — will be the keynote speaker for the second annual Endurance Exchange. The virtual endurance sports industry conference will be hosted from January 21-23, 2021.

In addition to Jorgensen, triathlon’s “big four” – Mark Allen, Scott Molina, Dave Scott and Scott Tinley – will also be keynote speakers. The 2021 edition will be held virtually to offer greater flexibility, reduce costs and eliminate the need for constituents to travel to attend. All content will be recorded, and attendees will be able to view sessions live or on-demand – offering options to accommodate delegate schedules.

Gwen Jorgensen was an All-American track and cross-country runner for the University of Wisconsin and also a member of the school’s swim team. After graduating with her accounting master’s degree and CPA license in 2008, she began working as an accountant at Ernst & Young in Milwaukee.

She hadn’t planned to pursue sport professionally — until one day, she received a phone call from Barb Lindquist, founder of USA Triathlon’s Collegiate Recruitment Program, who noticed her running and swimming talent and urged her to compete in triathlon at the elite level.

After learning the basics of the sport, Jorgensen earned her elite license in her first competitive triathlon. She went on to collect three podiums in her first professional season — earning the title of 2010 USA Triathlon Rookie of the Year — and ultimately punched her ticket to the Olympic Games London 2012.

She’d then go on to become the first woman to win a world title after an undefeated World Triathlon Series (WTS) season, enjoyed a 12-race WTS winning streak, and to win the Olympic test event followed by a gold medal the following year at the Olympic Games Rio 2016.

Since she won gold at the 2016 Olympics in Rio, Jorgensen has turned to running. In 2017, Jorgensen announced she was giving up the “comfort” of triathlon dominance to pursue a bold new goal: win an Olympic gold medal in the marathon. Her announcement came just months after giving birth to her son Stanley. “The sport of triathlon changed my life, gave me the opportunity to become an Olympic champion and ultimately set me on the path to where I am today, pursuing entirely new Olympic dreams,” Jorgensen said. “At Endurance Exchange, I’ll share a behind-the-scenes look into my journey — and in the process, I hope I can offer some tools that attendees can use to achieve their own personal and professional goals.”